Book Review: Don’t Call it a Cult by Sarah Berman 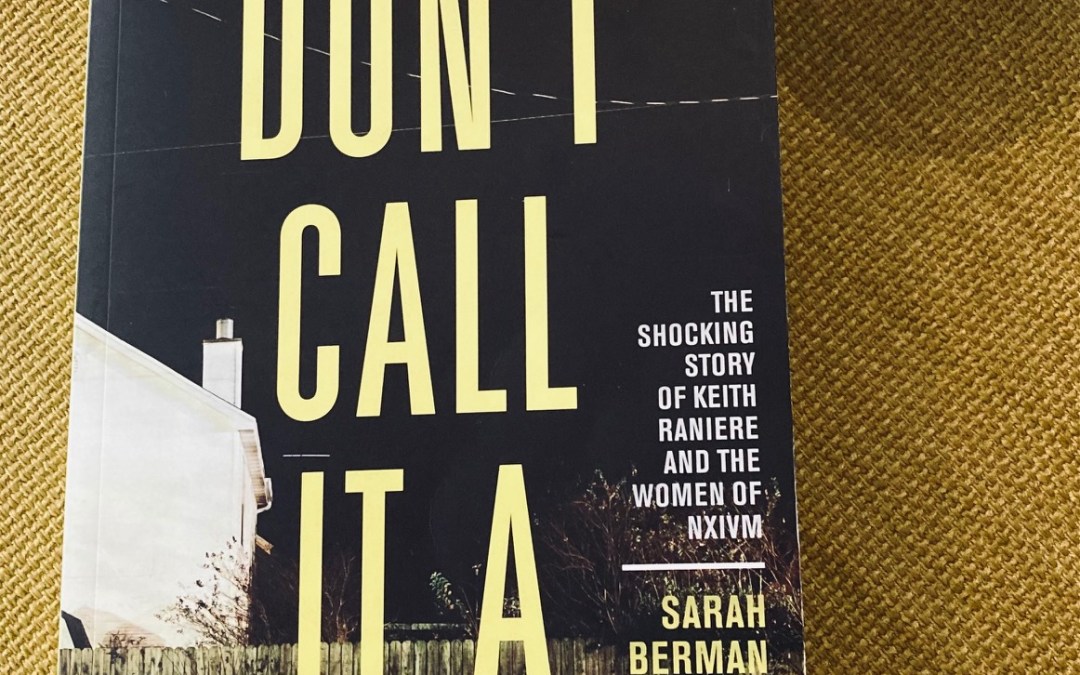 I may be giving you the wrong idea by calling this book a true crime. Don’t Call it a Cult by Sarah Berman isn’t about a murder, but it most definitely details the committing of a crime, numerous crimes, hundreds of little acts that constitute breaking the law. It explains the development of NXIVM, an organization that duped hundreds of people, mostly women, into giving away their money, autonomy, and trust to a man who now sits in jail, Keith Raniere. Despite what the title suggests, it is of course a cult, and although the members weren’t instructed to kill themselves or others, they were expected to detonate the rest of their lives and pledge allegiance to this man. Even more surprising was the fact that famous people with successful careers bought into this pyramid marketing scheme, so not only was Keith manipulative, he was extremely well-funded. If you’re anything like me, you heard about this group through the news, along with a few salacious details, but this book is a deep-dive into how women were caught in the snares of this twisted web and why it was so successful for so long.

Keith Raniere is an incredibly convincing person. Somehow, he convinced large swaths of people that he is one of the smartest men alive, a talented piano player that could easily go professional, a strategic investor that can manipulate the stock market to make millions of dollars, a corporate leader that can teach others how to run a successful business, and a really cool guy that’s awesome at volleyball. Oh I can’t miss this part; he told one of his followers and sexual partners that he “required sex constantly, or else spiritual energy might consume him to the point of death” (p. 59). So how did he get away with such ridiculous claims for decades?

Journalist Sarah Berman conducts countless interviews and devotes years of research to write this explanation of how Raniere built such an unbelievable empire of followers, eventually turning a small group of women into his own personal sex slaves. It basically starts as a leadership course that pays out a percentage of its fees to ‘coaches’ who enroll other people: a typical pyramid scheme. But through manipulation, coercion, and blackmail, an organization is created that relies on people’s initial adoration and eventual fear, scaring them into keeping secrets and ignoring their increasing discomfort. What sets this cult apart from others is that Raniere befriends some extremely wealthy people including the Bronfman sisters, heirs to the Seagram fortune. Lost and directionless, they fall under Raniere’s spell and his claims of ‘making a better world’, funding hundreds of court cases meant to silence their critics. Eventually his defectors bravely approach law enforcement which leads to an FBI-led investigation, and eventual charges. The book ends with short descriptions of the sentencing and judgements of Raniere and his upper-level executives of NXIVM, women who enforced his rules. Many people went to jail and/or fined for their participation, but it’s clear that even those who helped carry out Raniere’s wishes are traumatized by what happened to them, and what they enabled.

It’s hard to provide a concise timeline for the development of an organization like NXIVM. Many of the people involved would not have been possible to contact, as some are in jail right now, and I suspect many more are simply unwilling to talk. It’s an embarrassing thing to publicly admit you’d been duped by someone, so there are certain people that offer lots of first-person accounts in this book, while there are others we only learn about through hearsay or other people’s recollections. We never hear from Raniere directly, although there are numerous quotes of his sprinkled throughout other people’s narratives. This should come as no surprise because he was literally worshipped, and in some cases, his initials were branded onto some women’s bodies, so his words are easily recalled by many.

Unfortunately we don’t get a lot of direct experiences from the author herself about the process of writing this book. Towards the end she confesses that she became a bit paranoid after a few occasions seemed to push the boundaries of mere coincidences. By then she had learned of NXIVM’s reputation for destroying its critics’ lives, and because she was a journalist making public inquiries about this cult and its followers, she was essentially painting a target on her own back. Luckily nothing came of it, and now that Raniere is behind bars for the next 120 years she (hopefully) doesn’t have any others to worry about, but the atmosphere of mistrust is something that permeates the entire book, and the power of suggestion becomes awfully powerful in the wrong hands.

I personally love when non-fiction books include pictures, you get a first-hand view of all the players, and in this case, you get to see pictures of this persuasive, supposedly-gifted man in the flesh. Sadly, these pictures depict a fairly average-looking man who somehow had the power to convince one woman (who was Jewish!) that she was the reincarnation of Hitler, and she could help repair her soul by joining his spiritual mission. It wasn’t only their minds he had control over; the physical demands were incredibly stringent; many of them were on extreme diets to become as thin as possible, and he monitored their weight daily, questioning them if they weren’t maintaining the goal weight he had set for them. It wasn’t just Raniere that maintained this poisonous culture; the higher some women moved up in the organization, the more power they were given over other members. It turned into women forcing other women to have abortions when they became impregnated by Raniere, tying each other up so he could sexually assault them, and demanding collateral from each other that would be released to the public if they ever tried to leave.

At times, I found myself blaming some of the women directly-how could they not have seen what was happening? It’s easy to blame the victim, and many people still do, but this book is an exploration of how easily we can shift our train of thought, and giving anyone outside of our own selves the power to control our lives is a dangerous one. Berman mainly gives us the facts as she knows it, like any good journalist, but I can’t help but feel this book is a warning to those in constant search of enlightenment. If someone/something/some group urges you to alienate yourself from your friends and families, that’s a pretty good sign their intentions are not in your own best interests.