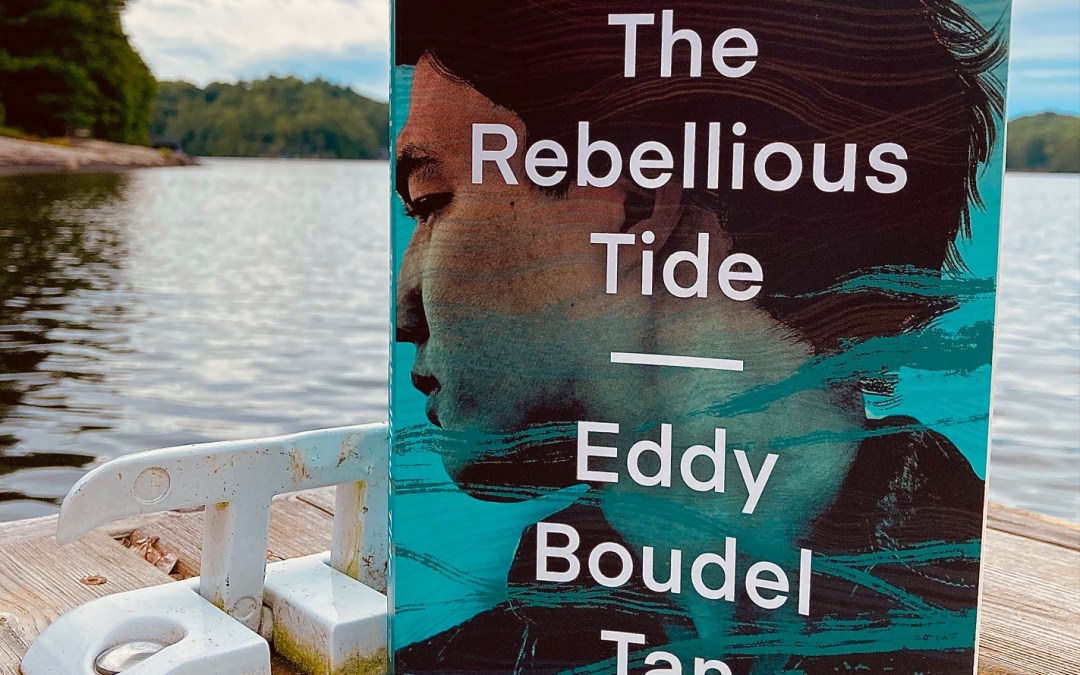 Yet another book that takes place on a boat, The Rebellious Tide by Eddy Boudel Tan is a more serious, character-driven novel that tackles the class divide that is so painfully obvious on a cruise ship. Much like the book The Swells that I read a few weeks ago, the exploitation of those who work to support the wealthy is at the heart of this book, although it has got a few different storylines (including a romance!) that propelled the plot along, much to my delight.

Sebastien has never met his father, and his mother only spoke of him briefly before her death, so he decides to find and confront him about why he left a pregnant wife behind in Canada almost thirty years ago. Sebastien tracks him down to a luxurious cruise ship known as The Glacier, so he finds work on it as a photographer, keeping his secret to himself as he ingratiates himself into the crew and staff. He quickly makes friends,  learning what life is like aboard a ship of that size and stature. As a staff member, his life is slightly better than the crew, whose jobs of cooking and cleaning relegate them to the bottom of the ship with no access to the upper floors unless on duty, and very little pay and respect. When the officers and higher ups make it clear their actions are above the law, the crew and staff form a rebellion, pushing back against the exploitation they experience at the hands of the commanding officer, Sebastien’s father. While at sea, Sebastien also meets a new lover, Nikos, the head of ship security – they begin a secret relationship as same-sex relations become outlawed on board as punishment for the uprising. If that wasn’t enough drama for one book, Sebastien also begins to uncover a dark secret aboard the Glacier that his father may be involved in, which adds even more importance to the movement against the unfair powers on the ship.

Through flashbacks we learn of Sebastien’s childhood, and a major event that kept his life from flourishing beyond the confines of his small town in Quebec, Canada. Thankfully, this occurrence was not withheld from the reader, or overly referenced to build up false suspense. I’m being particularly vague to avoid spoilers, but it was a situation that I didn’t anticipate as a reader and it helped explain some of Sebastien’s seemingly out-of-character reactions, so it was well-done and appreciated. In general there aren’t any hard to believe coincidences, but some of the characters’ actions and trajectories were extreme considering their circumstances and Sebastien was full of contradictions, so the characterization needs a bit of brushing up or the backstories needed to be fleshed out a bit more.

Sebastien is bisexual, regularly having relationships with both men and women. Being from Canada, he doesn’t seem concerned about hiding this fact, it’s simply a part of him and he talks about it openly when asked. In contrast, many of the characters on the ship with him are from other parts of the world where being gay is illegal, so their openness varies when it comes to expressing their true selves. It’s this lack of freedom that is used by those in power to justify their exploitation of those beneath them. They claim that because they came from a background lacking in wealth, education or human rights, the actions they take to maintain their own lifestyle is necessary. Drawing similarities between Sebastien’s behavior and his father’s behavior is a theme that runs throughout and I appreciate the thoughtfulness behind this comparison because it highlights the subtleties found in the spectrum of good and bad in humanity. What makes a person’s actions bad but understandable? What pushes those actions into the unnecessarily bad category?

I’ve got some conflicting opinions about this book, but when forced to give a final verdict, I’d recommend it to those looking for a plot-driven novel. It moves along quickly enough that one doesn’t need to get caught up in the minor quibbles a book reviewer like myself tends to zero in on, but there are some minor issues that were hard for me to ignore.