Book Review: Everyone in this Room Will Someday Be Dead by Emily Austin 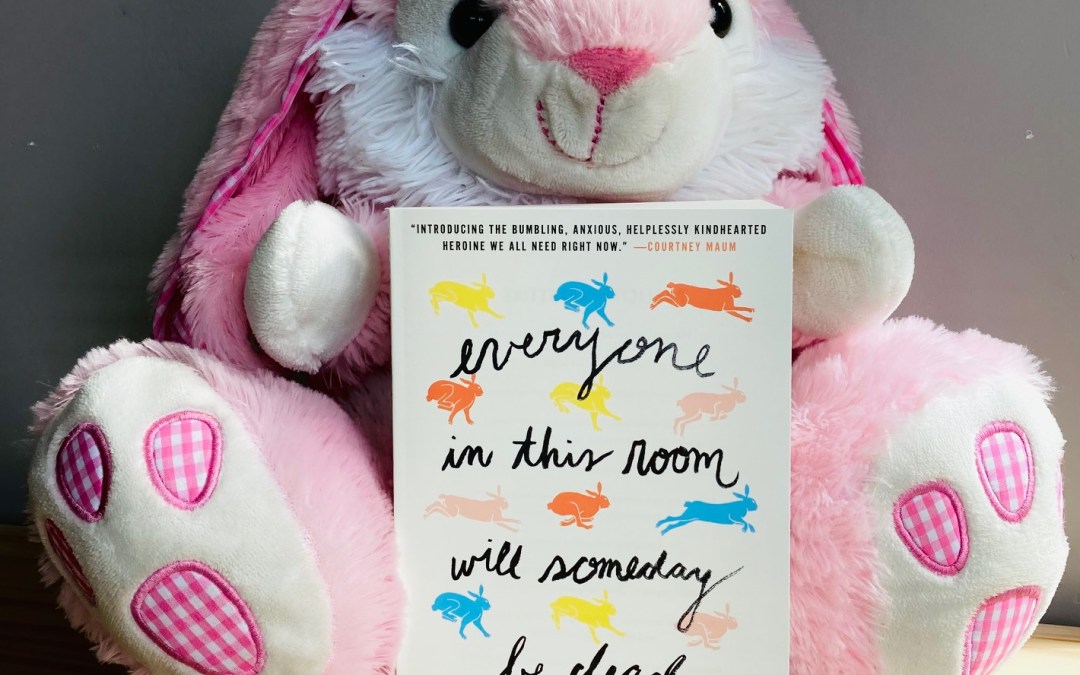 Like many people, I picked up this book because of the title. I haven’t gotten sick of ‘quirky’ yet, so I gave Everyone In This Room Will Someday Be Dead by Emily Austin a go. Is it just me, or does this book look American to you? I’m not sure why I feel that way, but I do recall being surprised when I realized Austin was Canadian, and the story was set in Ontario. A thoroughly character-driven novel, this book centers on one girl, Gilda, and her struggles with depression, anxiety, and occasional suicidal thoughts. And if this sounds dark, let me assure that you that these issues are dealt with empathetically, and with a sense of humour, so reading this book still felt immensely entertaining. It’s a fine balance Austin strikes, and she successfully draws the reader into the sometimes sad but always readable life of Gilda.

Gilda has lost yet another job, because she struggles to get up in the morning. Her apartment is filled with dirty dishes she hasn’t cleaned, and she rarely showers. She knows this isn’t normal, so she frequents her local ER, and the doctors and nurses have always said the same thing; she suffers from anxiety, and will send a referral to a psychiatrist. (which never seems to come). Desperate for help, she goes to a local church which advertised a therapy group. Father Jeff mistakes her for a job applicant to fill the recently-opened up position of church administrator, as the last secretary, Grace, died at the age of 86. Because Gilda needs a job, she accepts this one, despite the fact that she is not Catholic, and in fact, gay. It seem as though the only requirement for this new job is to “know how to use the internet” so Gilda is immediately hired, and discovers that Grace’s friend Rosemary (also a lady getting on in her years) has been emailing Grace regularly, still unaware that her friend has died. Distraught at the idea of passing along the terrible news, Gilda pretends she is Grace, and emails Rosemary back regularly with fictitious updates on Grace’s life. The novel continues along a steady but slow pace, following Gilda while she struggles to learn Catholic rituals during mass, continues a muted yet sincere relationship with a woman named Eleanor, all while trying to come to terms with her brother’s alcoholism and her parents refusal to acknowledge there is any kind of problem.

The cover blurb of this book claims it is “introducing the bumbling, anxious, helplessly kindhearted heroine we all need right now” (Courtney Maum). And I do agree we need to read more characters like this, but I’m also hesitant to frame her as ‘bumbling’, which to me, implies we can all just laugh at Gilda. If Gilda was a real person and not just a character, I would be very concerned for her, so I don’t want to undermine the seriousness of her problems. She suffers from severe depression, and her suicidal thoughts do come to a head at certain points, so her problems aren’t things we can minimize or make light of. Still, the humour that’s injected in this book (usually by Gilda herself, not because of her situation) is a welcome respite, especially Gilda’s attempts to camouflage herself as a catholic, these are particularly hilarious:

Jeff makes the sign of the cross, and then says loudly: “In the name of the Father, and of the Son, and of the Holy Spirit.”

To my horror, the crowd surrounding me replies in unison: “Amen.” Startled by this, I put a hand to my chest. We have lines? (p. 54 of ARC)

The existential questions that Gilda obsesses over seem incredibly relevant as we make our way out of this pandemic. She spends so much time on her own that she easily spins into thinking about the nothingness of space, the relative shortness of our lives, the inconsequentiality of our actions as individuals, etc. No doubt there were many people that spun themselves into these same black holes of thought after months of living in isolation. What I found really heartwarming about this story was the fact that even though Gilda feels alone, she is surrounded by people who love her. Even when she finds herself on the edge of a bridge, strangers come to her side and ask if she’s ok. And although we may tell ourselves that our actions are meaningless in the grand scheme of things, this pandemic has taught us how connected we all truly are. So as we begin to re-emerge into the world, Gilda and her strange habits are a reminder of why we need to overcome our anxieties and reach out to one another, now more than ever.