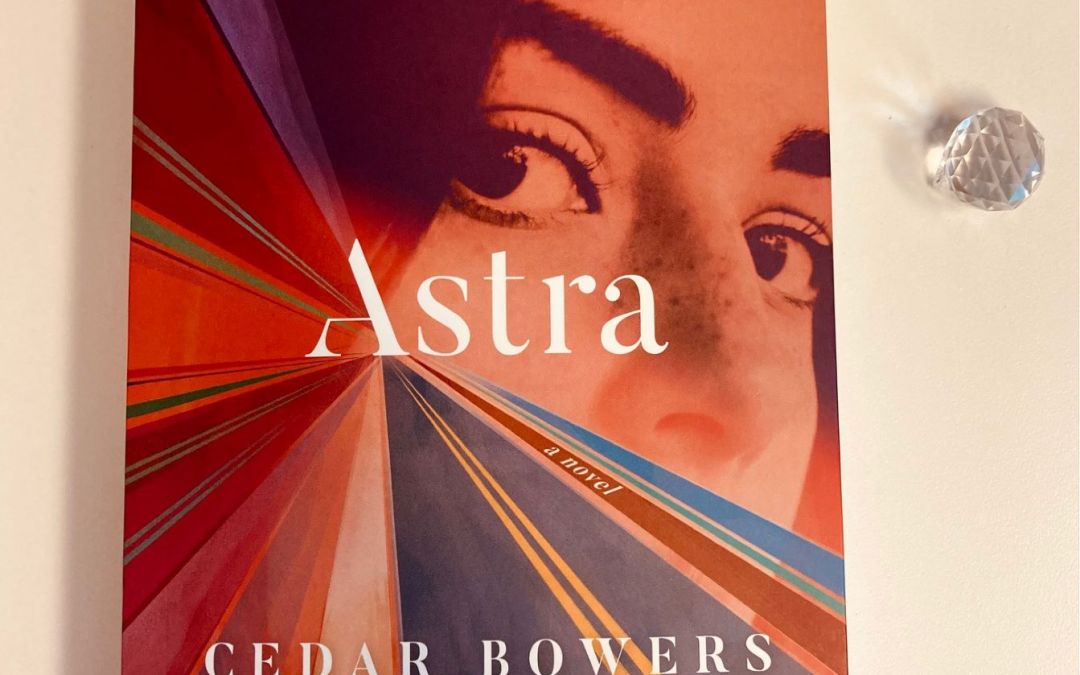 Although it sat on my shelf for a few months, Astra by Cedar Bowers wasn’t pushed to the top of my stack until it appeared on the Scotiabank Giller Prize Longlist. I wish my reading wasn’t a slave to the prize lists, but I must admit it helps me narrow down my selection when faced with a never-ending TBR! Unfortunately it didn’t make the Giller shortlist but I’m glad I read it anyway, because it has become one of my favourite books of the year.

Astra is born on a farming commune in British Columbia to a man named Raymond who reluctantly accepts fatherhood as Astra’s mother dies in childbirth. There are ten chapters in total detailing her life through other people’s eyes; the young girl she befriends as she runs wild on the commune, the concerned mother who attempts to mother Astra during her teen years, the various men Astra falls into romantic relationships with, and the family members and friends who circle in and out of her life. The book ends with an epilogue told from Astra’s perspective when she’s entering her early senior years and faced with the results of her decisions (or lack thereof) made through a single lifetime. Despite her strange upbringing, her life is far from remarkable, in fact one may be shocked at how ‘normal’ Astra ends up being, especially considering Raymond refuses to take almost any responsibility for her growing up, continuing on his selfish way until the very end. Her story is a common one, but Bower’s writing and stylistic choices elevate this coming-of-age tale to a memorable look at one woman’s beginning, middle and (close to) end.

Astra is left with both physical and mental scars from her time on Raymond’s commune. Because we hear from another few children and parents who spent time there, we quickly get a sense of how failed an experiment this place truly is. Raymond and his friend are idealistic founders, hoping it will serve as an escape, but also proof that one can live off the land outside of society’s commercial expectations. Unfortunately, selfishness is at the root of its failure. Although most people come and go from it after immediately recognizing its problems, Astra spends her entire childhood there, vulnerable to not only the elements of nature, but the evils of human nature as well. Most will recognize the danger Astra is in on the commune right at the beginning of the book, so I became cautiously concerned for Astra’s well-being as soon as we were introduced to her. As she moves through life, her strange beginnings shape how others interact with her; sometimes with jealousy, sometimes with overt concern. This book isn’t so much about Astra herself, but how one person’s perceived weakness can bring out either the best, or the worst in people circling in their orbit.

I rarely mention cover design in my reviews because I lack a real artistic eye – and those who know me well, know this is an understatement! But I wanted to mention how incredibly insightful this cover is, and how it actually shaped the way I read this book. You’ll see there is a prism of light stemming from the woman’s face which led me to view all these various chapters/perspectives of her as a type of gift; the innate ability to see different shades of one person, all coming together to create a brilliant and complete spectrum. It’s not important that we are getting the absolute truth of Astra, instead we are experiencing her in all different forms, through the various lenses of a vast array of people. These differing, sometimes competing viewpoints of our protagonist is what made this book so profound for me, I became so wholly invested in Astra’s life that I felt I had said goodbye to an old friend by the last page. Reading about Astra placing glow-in-the-dark stars on her father’s ceiling just about broke me – you’ll know what I’m talking about when you reach that part!

The jump in perspectives is not at all jarring, in fact, it’s what keeps this book moving along so quickly. Astra’s story so lovingly details what it means to be human, but enough happens to her that even plot-hungry readers will enjoy this book. This novel has wide appeal so I’m hopeful it will continue in popularity well past the Giller announcement on November 08.