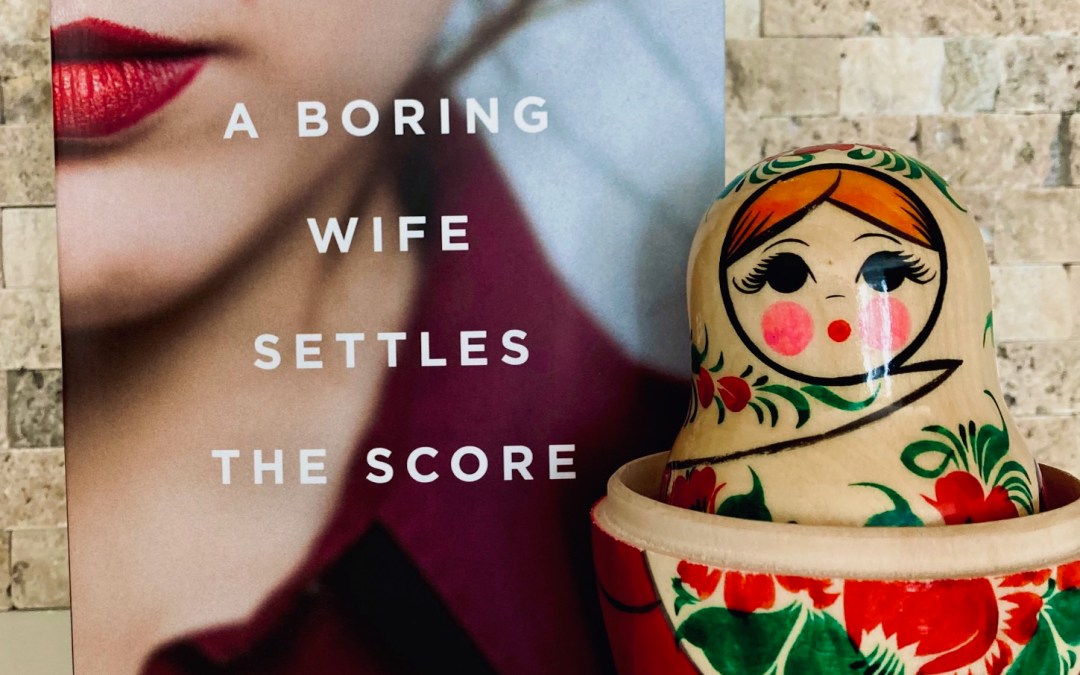 It was a mistake on my part to not give the first book in this series, Autopsy of a Boring Wife by Marie-Renee Lavoie its very own full review on my blog because it’s a stand-out novel for me. I’m finally righting that wrong and giving the second in the series, A Boring Wife Settles the Score its own, glowing full-page review that it deserves. This is a difficult book to recommend, because convincing people they need to read a hilarious book about a woman who has gone slightly unhinged by anger towards her asshole ex-husband can be a tough sell, but I did it anyway, and chose it as one of my three books to feature in my Calgary Public Library ‘reading influencer’ display. I should also mention this book is originally written in French, and is translated once again by Arielle Aaronson, just like the first. I love books with a good sense of humour, and a book like this, with a protagonist that has stayed with me for years, is definitely worth a try.

We meet up with Diane once again, a few years since her divorce. She lives by herself in an apartment in the same building as her best friend (who is also single), and Diane has just secured a job as a teacher’s assistant for before and after school care, so she comes and goes throughout the day. She’s also caught the eye of her man- friend Guy, who is covered in muscles and tattoos, currently working construction at that same school, so there’s a thread of romance that keeps her light on her feet these days. Not surprisingly, her ex-husband (who left Diane for his secretary who is half their age because she became pregnant with his child) has begun to realize how romantically incompatible he is with someone who is the same age of his grown children, and begins an attempt to woo Diana back. Aside from these developments, Diana has also begun working on her anger issues, and instead of taking a sledgehammer to the furniture and walls of her home, she has purchased knickknacks to smash with her sledgehammer instead, at the advice of her therapist. All in all, things are looking up for Diane.

I’m trying to pin down the reasons why I love these books, and it is so clearly Diane herself, and her reaction to things. I remember enjoying the first book, but also being a bit concerned for Diane, whereas is this second installment, her life so clearly on an upward trajectory again that instead of worrying about my fellow female, I can bask in the glory of her life’s small successes. The romance with Guy is a big step for her; she spends lots of time swerving between an attempt at flirting with Guy, and then scuttling back to her house wondering why someone as attractive as him would be interested in her. In her late forties, she’s been with only one man, her ex-husband, her entire life. Her self-esteem has taken such a hit since her divorce that the majority of the book isn’t about her time with Guy, instead it’s about her learning to be confidant in herself as a woman, and allowing her desires to be the goal of her actions for the first time in her life. Living selfishly does not come easy to her, and I would argue it doesn’t come easy to any woman who has spent her life raising children and taking care of a husband, but this book is Diane’s late blossoming, and it’s a joy to witness.

Not only is she now in a position to enjoy the spoils of being single, she’s found her voice and ability to stand up to others. There’s a showdown between herself and another teacher at work where this stick-by-the rules woman insists one part of the playground is only for a certain age group, even though Diane’s young charges were enjoying it, and crying at the thought of having to leave. Unable to stand by and let this wrong continue, Diane marches up to the offending teacher, yanks this ball strap from her hands and refuses to move. She pays for this later, but she’s more than happy to stand up against this other schoolyard bully for the sake of her class. The new anger that propels Diane through her life has morphed from violent destruction of her household to standing up for what she believes in, damn the consequences. In a slightly more petty instance, Diane secretly slaps a silly patch onto the backpack of an unsuspecting teenager who’s whining is getting out of control, sure to subject that young girl to taunting once her classmates see the “god is love” declaration on her bag. It’s a small thing, but it brings Diane (and the reader) a little bit of joy to indulge in.

The writing itself is sharp, witty, and laugh-out-loud funny. Diane is self-deprecating in the way many middle-aged women are, but she barrels through life anyway, happy to get away with whatever she can. In this scene, she’s been asked by a younger co-worker to ‘cover’ for her at a conference, as this young woman is off to do something she shouldn’t instead of sitting through some boring presentations. Diane agrees, and makes up a little white lie to secure the folder:

She returned my wink and handed over my imaginary friend’s folder without asking for proof. Easy-peasy. I have a face that inspires confidence; that’s how it is when you’re boring. I stuffed Sophie’s things into my own purse, the giant kind moms use because, even twenty years after the last diaper, they never learned how to get by with a smaller one (p. 105).

It’s a certain kind of humour, but one that’s generously sprinkled throughout, which makes both books such a delight to read. I can’t wait for the third, and hopefully fourth, fifth, and sixth in this series.