Book Review: The Book of Accidents by Chuck Wendig 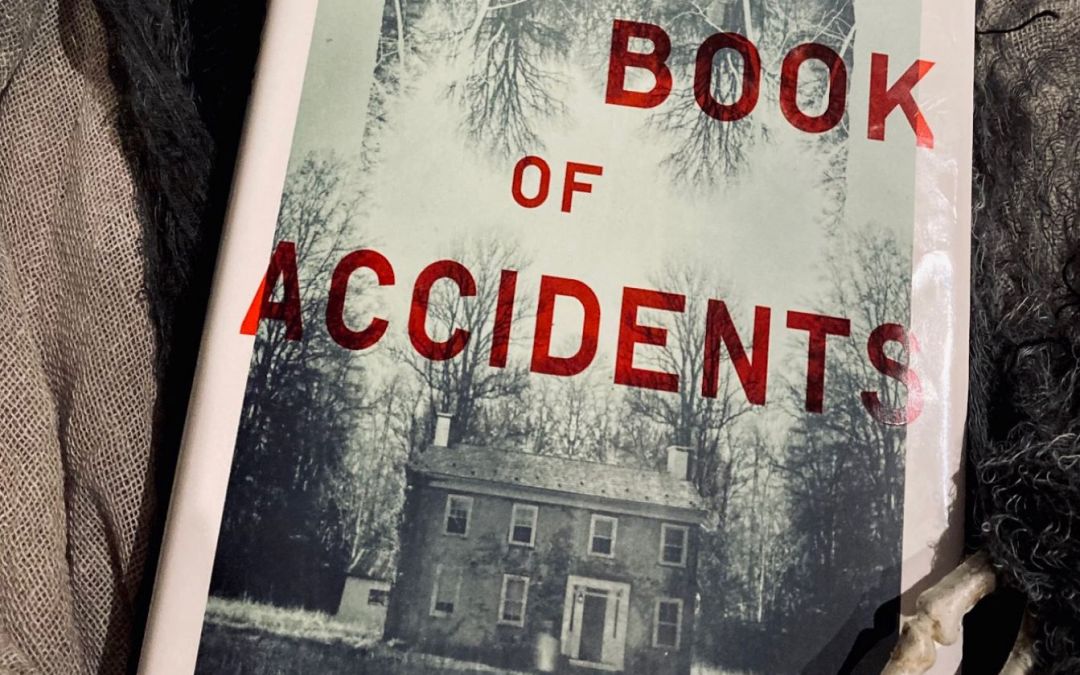 This is my second-to-last Halloween book that I’ve got on my shelf, and now that I’ve been reading horror for a few straight weeks, I’m feeling a bit sensitive to all the violence I’ve been exposed to, but I’m also more attuned to the critiques of society that this genre often employs. The Book of Accidents by Chuck Wendig is a great big tome of a novel that I hesitated diving into because of its length, but now that I’ve been fully ensconced in its dark world(s) and come back out again, I realized that it gave me a better appreciation of the horror genre in general. There’s a reason why Stephen King has millions of fans – and speaking of him, fans of his books will love The Book of Accidents.

There are TWO prologues in this book; one details the execution of a serial killer in the electric chair while the second touches upon a strange meeting between a physically scarred young boy and a man hunting pheasant in an isolated field. As the story proper begins we are introduced to Nathan when he decides to move into his deceased father’s house in rural Pennsylvania with his wife Maddie and teenage son Oliver. Looking for a fresh start for everyone, they cautiously enter this new life in hopes Oliver’s anxiety will ease and he’ll make some new friends, but when Nate starts seeing visions of his dead father, it’s rather obvious this move wasn’t destined to succeed. The area they live in is infamous for its horrific history, including the ‘rambling rocks’ field where the previously-mentioned serial killer slaughtered his victims. When Oliver befriends an older teen with a scabbed face and jaded worldview, Nathan is too busy to be concerned because he’s preoccupied with the ghostly figures that seem to pop in an out of his vision. Maddie is also distracted when she realizes the sculptures she creates in her new home are possessed by some demonic spirits. There isn’t just one spooky aspect to this plot; it spits out the horror from all angles.

There’s a few reasons why I think this book would work well for Stephen King fans, and although I admit I don’t read a lot of, him I associate certain characteristics with his books. First off Wendig’s writing reminds me of King because it’s so cinematic. As the characters meet their fears head on, I can easily picture this as a movie, shocking people both on the page and on the screen:

…and as he ran it was not just the sound of footsteps in the dark but the wet sounds of something slithering, like a clot of infinite worms pushing through the tunnel. And at that, the clowns on the wall began laughing in time with Reese…(p. 426).

Yes clowns are terrifying, but they barely register with all the other horrific things going on in this particular scene. And the plot is just as important as the writing in this story; some characters are better developed than others, but it all works seamlessly to pull us through the obstacles of Wendig’s world.

Another reason why I liken Wendig to King is the gradual breakdown of reality. When you compare the beginning of the book and its setting to the place you end up in at the conclusion it feels as though you’ve survived the impossible along with the characters, and the slow-building suspension of disbelief required is so carefully done. On the verge of coming around a corner and seeing what will no doubt scare him, Nathan admits “again came the feeling that something was really, truly wrong, wrong in a way that went beyond this moment and into something deeper. The fundamental machinery of things was starting to break down…(p. 192).” This was the moment in which I as a reader realized there was no going back to the safe world where everything makes sense, and this happens quite early on in this book. The sense of dread is palpable, because this is a clear signal to the reader that it’s going to get MUCH WORSE from here on out, and it did!

It’s probably obvious by now, but the third similarity I see between these two authors is the extended length of their novels – this one clocks in at 525 pages, but the majority of the chapters are short, and I found myself moving quite quickly through it once I started. So if you can brave the length, the never-ending ghoulish figures and the accompanying nightmares you are likely to experience, give this one a try before October is over.