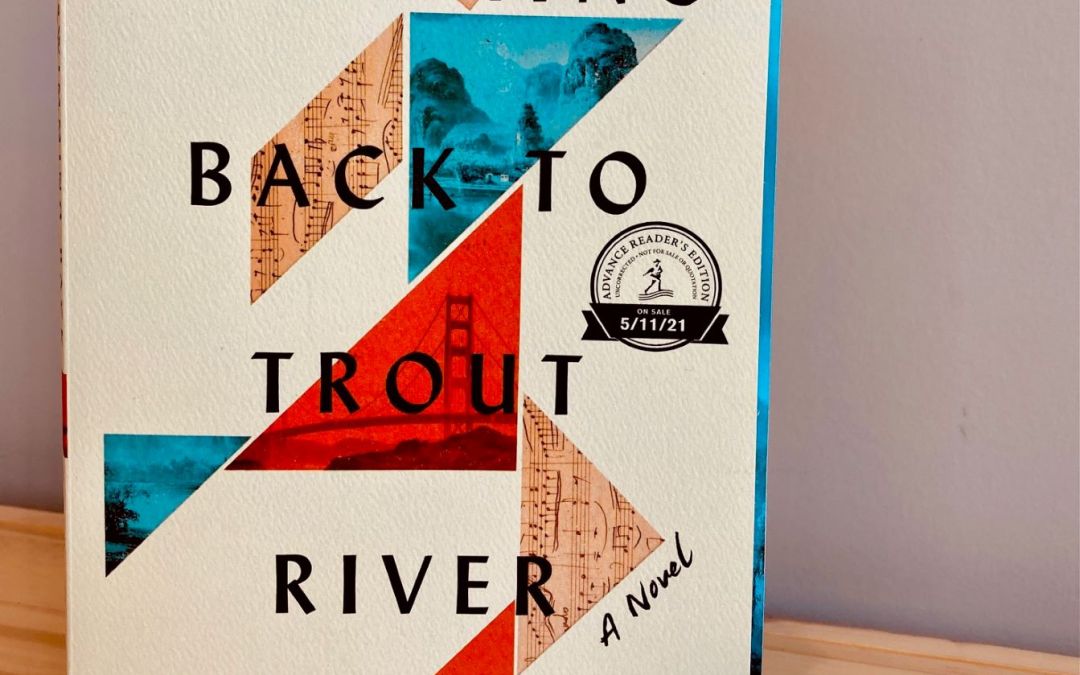 After finishing the last page of this book, I released a great big sigh. Not because I was relieved it was over, in fact, I had hoped Swimming Back to Trout River by Linda Rui Feng would go on longer past its 260 pages. Instead I let out a sigh of contentment because this is one of those literary novels that marries beautiful turns of phrase and slight plot shifts together to form a memorable reading experience. It’s shocking that this is a first novel, considering how expertly timed the storyline is. Like Astra, I’m disappointed it didn’t make it into the Giller shortlist, but I’m so glad the fact of its longlisting brought it to my attention in the first place.

This book focuses on 4 people and the affect of the Chinese Cultural Revolution on their lives; Momo, married to Cassia and the father of their young daughter Junie, and Dawn, a woman from Momo’s past with a talent for the violin. Momo and Dawn struggle to connect during the revolution because any outward appreciation of non state-sanctioned art (i.e. most of it) is forbidden, but their mutual love of the violin and its music brings this unlikely pair together. A few years later Momo and Cassia marry and have Junie, who is born without any legs. Momo eventually immigrates to America to go to school, and Cassia follows him a few years later, leaving Junie with Momo’s grandparents in Trout River. We dip in and out of each character’s life, not always following a linear timeline, but the glimpses we get of their experiences piece together their personalities in a compelling and thoughtful way, so although we don’t spend a lot of time with each, we come to feel we understand them all the same. There is no dramatic moment one can point to, as each person tends to navigate their life with a quiet dignity, but the ripples of certain events last decades, and there are some shocking decisions that twist the direction of lives irrevocably.

When trying to describe what I love about this author’s writing, the phrase ‘quiet beauty’ comes to mind. There are no overwrought sentences, awkward metaphors, or even that much description. Everything about this book is subtle, including the word choice. The most striking quotes were typically about the human condition, reminiscent of a Fredrik Backman-type observation. I know these types of pronouncements in fiction don’t appeal to everyone, but I love how they force me to pause my reading and reflect on them. This one comes at the beginning of the novel:

As for the peculiar feeling of milestones, it stayed with him into his adolescence, adulthood, and eventually into his fatherhood, when he understood that a child’s birthday was the most fleeting of milestones, when a parent could take the briefest recess on the long road of setting another life into motion (p. 12).

This book isn’t just about parenthood though, in fact, parenthood seems to be something that some of these characters can slough off for periods of time, it’s almost treated as a phase of life, rather than a path in life. I don’t necessarily believe the author was trying to make a statement about parenting, rather, the focus of this book is instead on the individual, and the choices we make as we move through our lives. Momo and Cassia are brought together, and then torn apart through their experiences as parents, and it’s not until the very end of the book that they learn the consequences of their treatment of each other.

Love, and its power between two people is another ongoing focus of the book, and there’s a unique little chapter that crystallizes some of the confusing dynamics between characters. Cassia explains that there are some words in the Chinese language that are untranslatable into English, so she lists the Chinese word, and then uses pages of English words to describe that that one Chinese words represents. The first word she chooses to translate is a condition between two people who are brought together by external circumstances, and at its core, this is truly what this book is about; chance relationships and meetings growing into something bigger, infused with a symbolism that only makes sense when enough time has passed to reflect on it. “Fate” is a word that seems inappropriate, yet I struggle to find a better way to describe what happens to each character and their individual trajectories. This is a book without a clear beginning or end, but it’s a lovely glimpse into one family’s life, and those who enter in and out of their orbit.