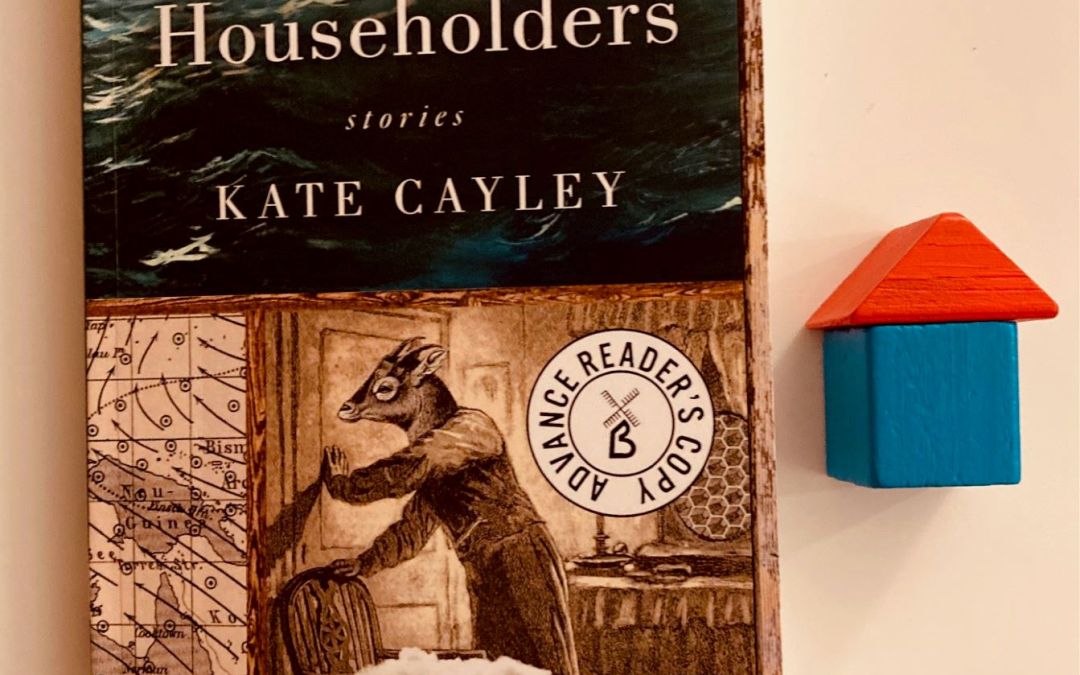 Having read a few reviews of Householders by Kate Cayley, I started to view this book that Biblioasis sent me (bless them) as a hidden gem that only people ‘in the know’ were reading and writing about. A starred review in Quill and Quire cinched it for me – I had to see what all the underground fuss was about. As I dove in, I quickly realized there is no doubt this book of short stories is written by a talented voice we should all pay attention to; Cayley’s ability to create characters that fascinate is something to behold. I still feel like I need time to process each of the nine stories, but I didn’t want to wait too long to write my review and then forget about my favourite parts, so below are my initial thoughts.

A recurring storyline and corresponding characters appear in a few of the stories, which starts with two young women going on a road trip together, and one, Naomi, staying behind at their destination and joining a spiritual commune. Not quite a cult, they live off the land in a shabby house, selling crafts and farming their own produce, going without enough food, heat, and warm water for the majority of the year. After a few years on the commune Naomi leaves and takes her only daughter Trout with her, returning to Toronto to live with her parents. We follow Trout and Naomi until they are skirting the beginnings of a global pandemic, and Trout is forced to make a major decision about her mother’s care. This is all told over the course of a few separate stories. Another story touches upon the chaotic life of one wife with four children, desperate to connect with other women and mothers in her neighborhood but resentful of how different her life is compared to theirs. Another story is set in the (hopefully distant) future, where the wealthiest people in the world have barricaded themselves into a luxurious bunker after the climate crisis creates a mostly unlivable world, and they’ve brought a young and broke coffee barista with them for soon-to-be explained reasons.

The majority of these stories are rooted firmly in reality, and while the bunker story isn’t unbelievable, it does make some dire predictions about our future state, and the ending contains a twist I never saw coming. All the stories, even the bunker one, are fairly inward-looking, even when major events are happening. One story is written from the perspective of a young man who is sent to care for a dying alcoholic and revered musician. We never learn this man’s name, but the musician is known as “Doc”, whom we later discover is one of the few secular musicians that is an accepted as appropriate music in the commune from the other stories – I loved these little linkages that wormed their way into the plots. This caregiver lives with Doc for a few months, and we don’t learn much about either of them, except for the rhythm of their relationship and the slow decay of the house around them. Even the barista wandering the halls of the bunker doesn’t dwell on the fact that it’s an apocalypses outside, all she can focus on is how bored she is. It’s as if the world speeds around these characters while they slow everything down for us in their head, allowing readers the space to take in both the plot and the writing at an equal pace.

The lack of dialogue allows for a generous number of pronouncements, both about the characters themselves or the thoughts they have about others. Despite the range of people portrayed, they all seemed relatable and fairly normal when we saw the world through their own eyes. One story I found scattered, “Handful of Dust”, was one I didn’t follow as closely because it focused too much on innuendo for my liking, but it’s the only story where I highlighted a particular quote because it so starkly reflected my own experience, and that of my friends:

“She leaned against the bar while we chatted, mostly about children, though she didn’t have any and I was afraid I was boring her, but children were the subject with which I felt helplessly identified” (p. 120 of ARC).

I know I’m not the only parent who has found themselves in this exact position – trying desperately to think of anything else to talk about, when all that comes to mind are topics that revolve around your kids, or stories that reflect you as a parent, or a mishap with another kid. I walk into a bar now convinced I’m the most boring person there (insert tired shrug here). Thankfully I have books to rescue me from painful small talk; what we are reading is always an engaging subject that most people are happy to participate in. Discussing a somewhat ‘underground’ sensation like this short story collection is sure to intrigue a few people, so for that reason alone you should give this one a try.