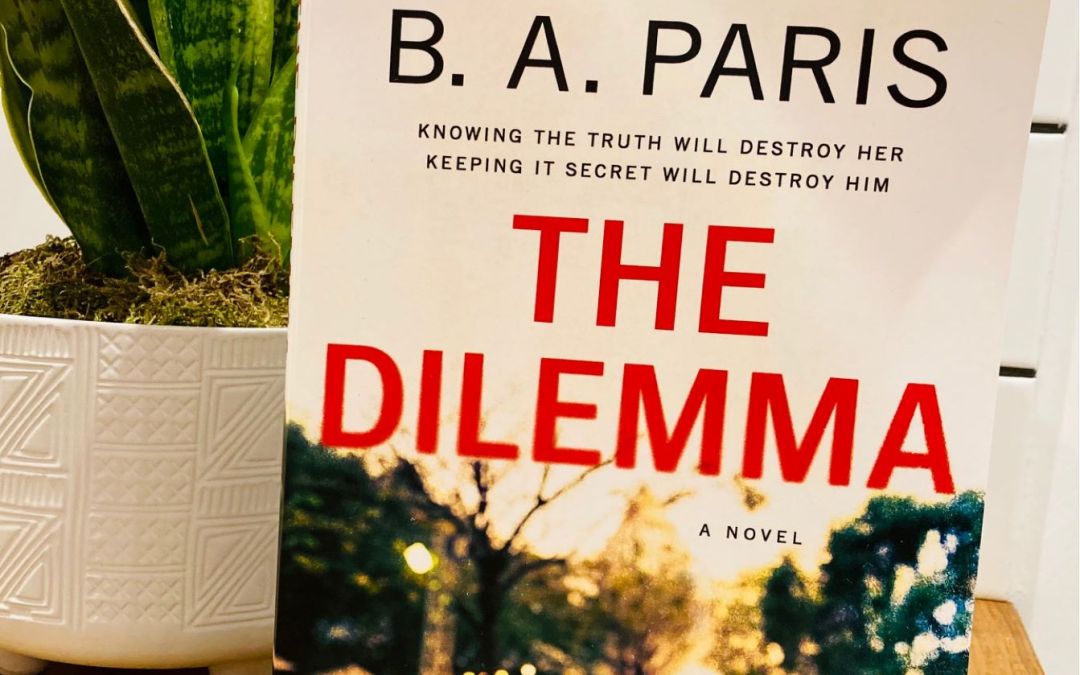 I know I’ve said this before on the blog, but I really think books need trigger warnings, and selfishly, I’m thinking of a trigger warning that’s a little out of the norm. I usually avoid this as much as possible, but I need to include a *spoiler alert* in this review, because I can’t help but write about my reaction to this book without giving away this major plot point. I read The Dilemma by B.A. Paris in less than 48 hours, in fact, it kept me up well past my bedtime which is very unlike me – probably due to the jet lag I was still fighting. I had just gotten off a plane and was heading back onto one in a few days, so you can imagine my horror once I discovered this book included a devastating plane crash. My bookmark was my boarding pass for crying out loud!

Livia has been planning her fortieth birthday party for almost two decades. She’s been married to her loving partner Adam all that time, and together they are planning a big celebration to make up for the lavish wedding they never had. This book takes place over the ‘big day’, from the last minute preparations to the wee hours of the morning after the guests leave. Unlike many domestic thrillers, this book doesn’t include murder or malicious intent. Instead it’s about keeping secrets from those you love with the hopes of protecting them and giving someone a deserved few hours of happiness before their life comes crashing down on them. Adam, Livia, and their son Josh all have secrets they are keeping from one another, some are even in denial themselves, and I raced through the pages to see if their worst fears do come true, and when or if they finally come clean, and whose deepest secret comes out first.

I’ve talked on this blog before about my hatred of flying. I really don’t like heights, and airplanes, or anything to do with airports. My palms get a bit sweaty even when I drive near our local airport, I hate it that much. Still, I do it, because I want to see my extended family and swim in the ocean occasionally. Is asking for a trigger warning about a plane crash bizarre? Probably, I still wish I had known about it though, I wouldn’t have chosen this book to bring with me on a trip overseas.

Despite my anxiety, I couldn’t put this book down, I read 3/4 of it in one night. As my husband woke up beside me, the lights still burning bright, he asked me in shock what was wrong, it’s so unlike me to stay awake late into the night, my regular bedtime is 9pm. Whether it be adrenaline or jet lag, I had to read to the end of this book once I got into it, I had no choice in the matter. That alone should be the only recommendation one needs to pick up this novel, especially considering this author didn’t rely on salacious murders to keep up the thrills. This was suspense of a different kind: the dread you feel in your stomach once you realize a relationship is going to change forever, or the guilt that gnaws at your stomach after a few days of keeping terrible secret. We’ve all been there, and we all know how terrible it feels.

The character dynamics are incredibly drawn out and detailed, the focus narrows in on this family and the secondary characters spun out from them. We may not have known what time of year this book was set in, but we got a very clear sense of the resentments, loves, and disappointments that brought each person to where we found them that very day. Livia is an especially fascinating character; obsessed with this party I first considered her selfish, but the more I got to know her, the more I liked and related to her. Each person was painfully realistic, full of contradictions but compelling and engaging nonetheless. This book won’t be for everyone, but stick to at-home reading if you do give it a go.