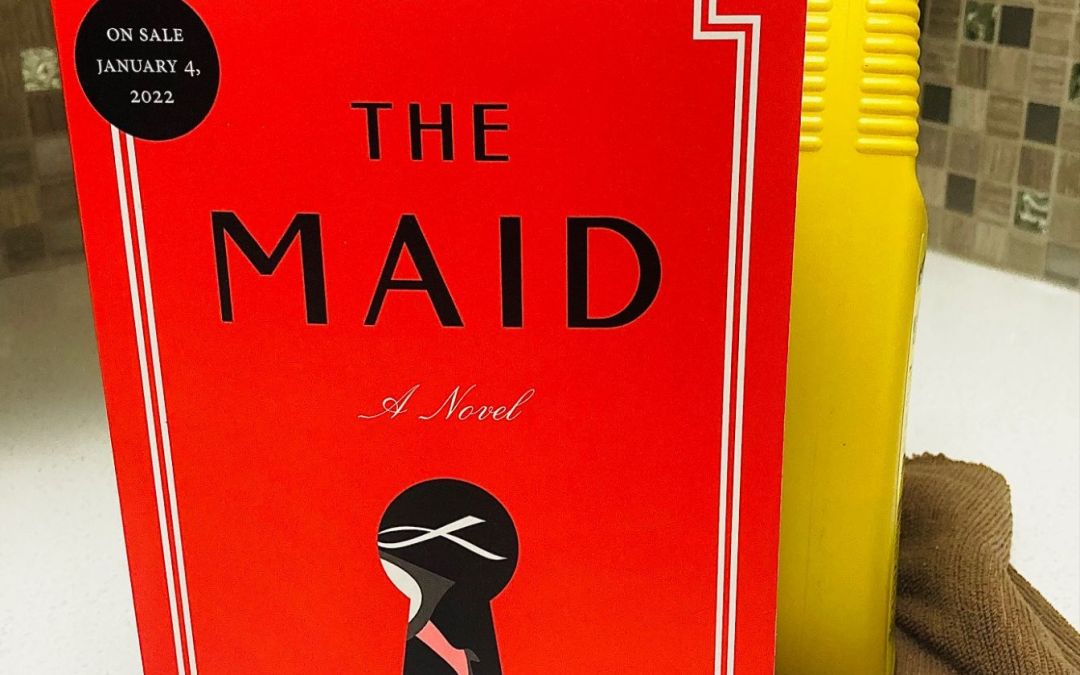 When I first heard about The Maid by Nita Prose and the enormous buzz it was getting a few months ago, I knew I would love it. A cozy mystery about a quirky maid written by a well-regarded Canadian book editor? Sign me up. Now it’s being made into a movie, and was just named the Good Morning American book of the month. It deserves every bit of praise it’s getting plus it’s a story we all need as we slouch into the new year with no sign of Covid abating (at least here in Canada).

Molly loves her job; she’s a maid at a local hotel and adores restoring things to perfection. She goes to work every day with a spring in her step, eager to clean away the messes the hotel guests make in their rooms. She has always been a maid, and lived with her grandmother until her death a few months ago. Still saddened by the recent loss, she doesn’t have many friends to confide in, and because she finds it difficult to read people’s expressions, many of her co-workers think her odd, and take advantage of her hard work and naivete whenever they can. One day Molly discovers a dead body in the bed she’s about to re-make, and it’s the hotel’s most famous client, the wealthy Mr. Black. His younger wife Giselle is the main suspect, but when Molly’s activities at the hotel are under the microscope by the local police officer in charge of the case, Molly falls under suspicion as well. Struggling to pay her rent, keep her job, and determine who really killed Mr. Black so she can clear her name, Molly has her hands full, but she discovers that relying on one’s true friends is the only way out of this mess – pun intended.

I’m guessing Prose is a reader/editor/author that is just as sick of the ‘that day’ suspense that’s running rampant in modern-day thrillers as I am, so she’s very cleverly created a protagonist and detective that struggles to read social and emotional cues, thus upping the tension in a very realistic yet subtle fashion. When the detective (and by default, the reader) is unable to determine who is trustworthy, the mystery becomes immensely more puzzling, but in a fun way. It slows down the plot, but also creates a more fair-play atmosphere for those who want to figure out the killer themselves, because one is relying on clues other than a ‘hunch’ or ‘gut feeling’.

There’s a constant push and pull between doing the good thing vs. doing the fun or easier thing. Molly has a constant library of sayings in her head care of her grandmother, which typically advise one to do the right thing, keep working hard, etc. Although Molly may not be familiar with other more modern-day sayings, growing up with only her grandmother has given her insight into a life that seems old-fashioned, but is incredibly useful to just about anyone. Throughout the novel are little observations that are presumably made my Molly as an interior thought, one of my favourites includes:

“That’s the trouble with pain. It’s as contagious as a disease. It spreads from the person who first endured it to those who love them most. Truth isn’t always the highest ideal; sometimes it must be sacrificed to stop the spread of pain to those you love.”

And although Molly seems entirely trustworthy and we are always on her side, we do get glimpses of her dark thoughts, which can occasionally be quite violent. So the reader finds themselves in a tough spot; do we trust Molly, even though she’s sometimes filled with understandable rage that could potentially boil over? Or is she like anyone prone to anger, and we are just getting a glimpse into her inner life that she would never dream of acting on? Again, we never fall into that tired trope of ‘unreliable narrator’, we never believe Molly is hiding something from us as readers, although we do learn she decides to leave out key points when talking to the police if it means her friends will be protected. All of Molly’s efforts are done in good faith, just like her grandmother would have wanted.

I don’t have a single complaint to nitpick about this novel, it was superbly fun, and a wonderful escape from the drudgery of living through a pandemic. It may not have encouraged me to pick up a duster anytime soon, but I wouldn’t mind coming across Molly in a sequel!