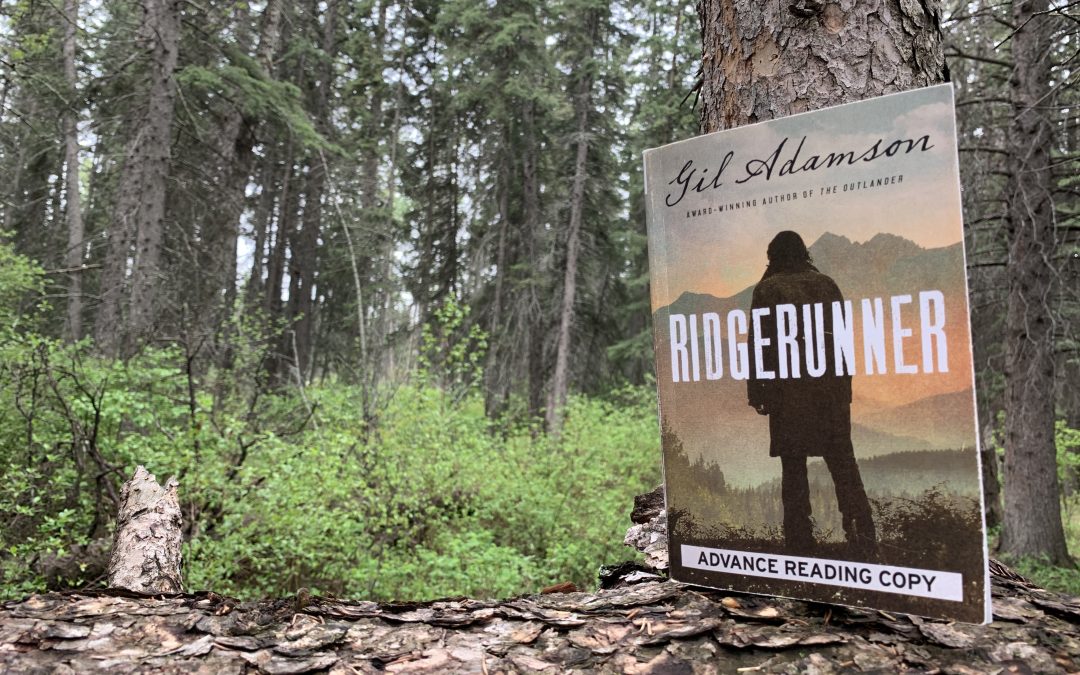 I groaned inwardly as I read the description for this book as a ‘literary western’. I generally hate the western genre, I find it very dull, I don’t like guns and I’m not really a horse person, so what is there for me? Luckily I picked up Ridgerunner by Gil Adamson anyway, mainly because I enjoy reading books that are set in my own town or province. Gil Adamson also won a bunch of awards for the prequel to Ridgerunner called The Outlander, so I knew it would be written well. Despite my snobbish misgivings I thoroughly enjoyed this book, and I anticipate it will find itself on many a prize list this coming Fall.

William is an outlaw of sorts, but one with a kind heart. He’s left his son Jack in the care of a nun in the town of Banff in the Rocky Mountains (for my international readers, this is about an hour’s drive from where I live in Calgary). He takes off on foot, walking south to the Alberta/Montana border, stealing from mining companies, taverns, banks, anywhere he can find some loose cash and practical tools to help him along on his journey. A widower, he is desperate to collect a decent sized amount of money to give to Jack so he can live a life of fulfillment, the money offering him the flexibility to do whatever he likes. Meanwhile, Jack is resentful of his dad for leaving him, he hates living in the town of Banff because he grew up in the woods, living off the land with his mother and father before she died. He’s fed up with trying to fit into the mold of the perfect son the nun insists he be, so he rides off on horseback in search of his old homestead.

Although it sounds like I’m setting up the plot of an action novel, this book is primarily character-driven. Jack’s caregiver is probably the most fascinating and surprising character of them all, and the twists that develop within her storyline are shocking. Because I haven’t read The Outlander, William was more of a mystery to me, but I want to assure people that I never once felt like I was missing out on Ridgerunner by not having read it’s predecessor-it stands strongly on its own. Jack is fun to read along with and we get his perspective most often. Although he’s extremely capable for a 12-year-old, his attempts at living on his own are humorous, one of my favourite scenes is when he brings a horse into his cabin from the cold. The ancillary characters are also well done, many of them exhibiting unique quirks that bring them into focus for the reader, making them unforgettable even though they play a smaller role in the book.

It takes place during WWI, and it highlights an often-ignored part of Canada’s shameful history, which was the internment camps they erected and imprisoned ‘alien’ men in. These prisoners, many of them completely innocent, guilty only of being an immigrant built the highway from Banff to Lake Louise, and Jack comes across these men and their guards while living in the mountains. Years ago I read a book that really opened my eyes to the challenges of living and homesteading in Canada at the beginning of the 20th century, which I still think of to this day because it makes me so thankful for our modern-day amentiies. And although Ridgerunner doesn’t get into the political reasons for these camps, it lays bare the horror of them, which is an important reminder as we travel these same roads to reach the beautiful scenery and tourism hot spots on a regular basis, especially for Calgarians like me. Canadians may be feeling smug these days as many view us as a diverse country accepting of differences, however our history is just as shameful as every other developed nation. Ridgerunner focuses on the beauty of our country, but it doesn’t shy away from the darkness either.