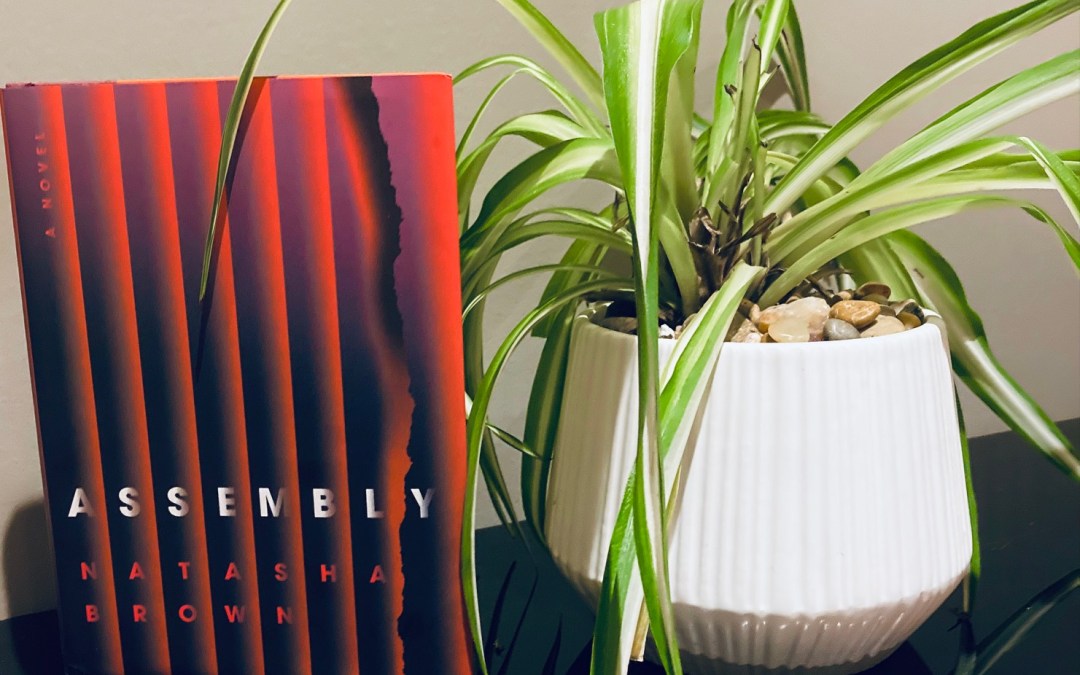 This slim little novel piqued my interest when I saw a short description of it in a catalogue. It touches upon race, class, gender, and the existential dread that millennials in particular seem to dwell upon, (what does it all mean? etc.) made even worse by the pandemic. Although Assembly by Natasha Brown doesn’t include Covid, the thoughts that cross the protagonist’s mind are certainly relatable as we all sit at home and ponder LIFE. The life of this particular woman is marked with the challenges she faces as a black woman in a largely male, white sector of high finance, and the success she has achieved in the traditional sense of the word. But what if that mark of success isn’t what everyone is striving for, it’s simply what we are told to strive for?

It’s difficult to slot this book into one category; it reads like a cross between poetry and memoir, but it’s listed as fiction (most likely with a dash of realism because I have no doubt Brown also experienced many of these things). We are thrown into the life of an unnamed, young black woman who works at high-pressure blue-chip company. She is smart and incredibly hard-working, receiving a promotion above some of her white male colleagues, but as she is being told about her promotion they mention she is an example of their company’s ‘diversity’, which of course steals away any feelings of accomplishment. She has gone to school and gotten good grades, then a good job, then saved her money to buy a house, and is dating a good, white man with family money. Much of this pressure to succeed comes from her family’s situation, the fact that as immigrants they could only get so far in their lives, but they’ve sacrificed so she could rise higher in hers. The book ends with her trip to her boyfriend’s family’s estate for a lavish garden party, questioning whether she fits in there at all. The short dialogue included between her and her boyfriend is stilted, and he comes off as a self-obsessed narcissist who sees her as a symbol rather than a real person.

I love a short book for many reasons, including the fact that authors who write short books are forced to include only the best of their writing, which is why I think this book is so taut and concise – no sentence is unnecessary. Actually it left me wanting more, I was disappointed when the book ended right before the actual party began because I wanted to see how the evening played out for our narrator.

There are subtle suggestions and mentions of other things going on in her life that contradict the perfect life she has cultivated – a (forced) affair with a higher up, and the diagnosis of a serious illness that could potentially kill her. Yet she remains almost emotionless about these elements, she is almost anesthetized to potential joys or fears, always focused on doing what’s right and expected of her. From the outside she is no doubt seen as ‘having it all’, but because we are privy to her interior thoughts, we know she is far from happy. When these very dramatic things are hinted at but never confirmed, it creates a sort of suspense that’s unexpected in a book like this. In fact, many parts of it almost read like poetry – nothing is ever obvious.

There is an exhaustion that emanates from the narrator, she is tired of working this job, tired of being quiet, and tired of being a symbol. As she lies next to her boyfriend in bed, unable to sleep due to her anxiety, she observes him:

“His presence vouches for mine, assures them that I’m the right sort of diversity. In turn, I offer him a certain liberal credibility. Negate some of this old-money political baggage. Assure his position left of centre”.

So much of this woman’s life is about how she compares the standard of whiteness, she can never be unique, or truly herself. As I write this review I realize the book sounds incredibly depressing, but I never felt the way when reading it. Instead, it revealed to me a privilege I’ve never given much thought to before, and that’s the freedom to be oneself despite the expectations of those around you.