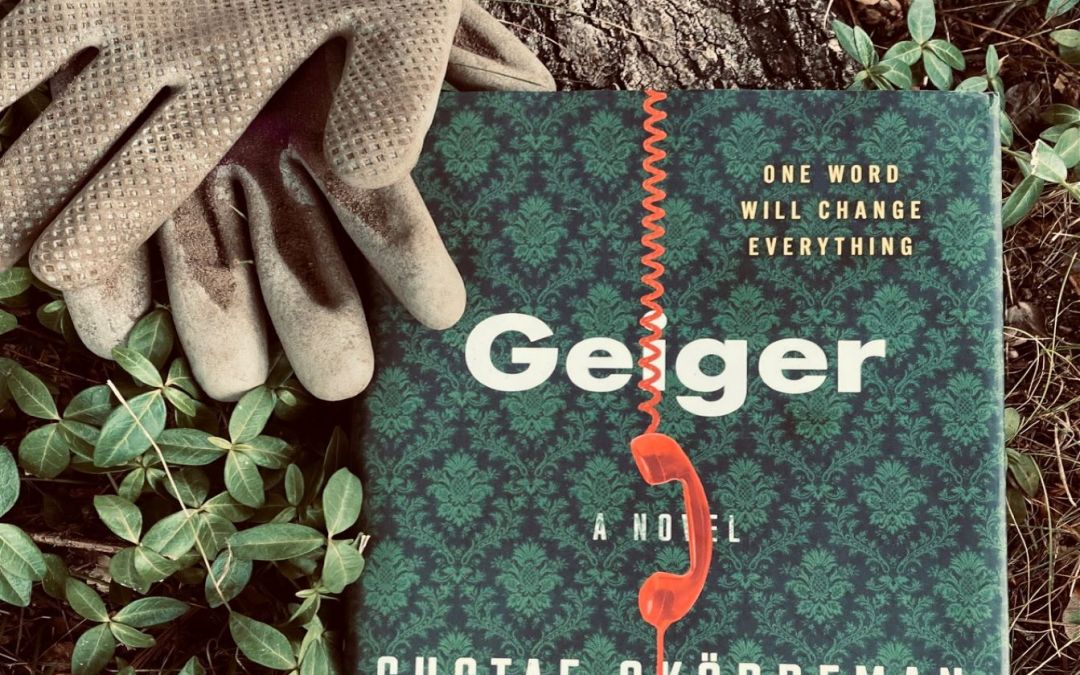 I distinctly remember picking this book out from a long list of pitches sent by a publisher, simply because the premise hooked me immediately; an old woman picks up the phone, hears one word, and shoots dead the husband she’s been married to for decades before fleeing their home. Now that’s a beginning to remember! Geiger by Gustaf Skördeman is translated from the original Swedish into English by Ian Giles, and instead of being a classic mystery like I expected, it turned out to be spy thriller that surprised me in its nuance and character development.

A once-famous man, senior Stellan Broman has been shot dead in his home, and his wife Agneta is missing. Police officer Sara Nowak grew up with the two daughters of the Bromans, and is assisting in this case as she may be able to offer assistance to find the killer of the beloved “Uncle Stellan”. The book is primarily told from Sara’s point of view who regularly works in the prostitution unit, and is struggling with some difficulties at home with her husband and two teenage children, but we also get a few glimpses into Agneta’s new life as she embarks on a mission that was triggered by that one fateful phone call. Periodically we hear from some of the seasoned intelligence officers that are also involved in the case surrounding Stellan, but through Sara’s relentless investigating, we learn that Uncle Stellan was much more than a tv presenter, and the stakes are much higher than the single murder that occurs in the first chapter.

Having a rudimentary knowledge of the Cold War is helpful when reading this book. Although I’ve read a few spy books in the past, and even a few works of historical non-fiction about specific spies from that era, I can’t say I have a strong background in this particular period. Still, I muddled through when the politics of that time were being explained and referenced, and despite a few dense sections in the middle, I found that the little information I already possessed got me through just fine. If I cared enough I could have slowed down and cross-referenced some things online, but I was more focused on the plot and figuring out who the baddies were. The history of East and West Germany is also worked quite deeply into the plot, but again, I made my way through treading lightly on the surface of these topics. No doubt a more thorough knowledge of that time would enhance the reading of this book.

What shocked me was the incredibly insightful character development of Sara, especially considering this book was written by a man. Perhaps this is an unfair assessment, but I find the interior lives of women are rarely explored deeply in a type of thriller like this, especially when the author is male. But Sara grapples with quite a few psychological obstacles in this book; the bullying she experienced at the hands of the Broman sisters growing up, her strained relationship with her own mother, the gradual drifting apart of her and her husband, and the doubt she feels when trying to connect with her young adult daughter. All of these emotions are complicated by the incredible anger she feels at the cyclical nature of her job catching johns, trying to protect the sex workers, and then everyone falling back into the same destructive cycle. Despite the fact that people are murdered, blown up, thrown in jail, etc. the majority of what I found interesting was how Sara navigated her everyday life.

On its surface, the plot is well-researched and timed, and there were lots of twists to keep any mystery or thriller- lover content. But as a reader who enjoys a good exploration of life’s competing commitments, I was also pleased with the multiple layers of conflict in this book – and the spectacular hook at the beginning certainly helps.