Book Review: Stories I Might Regret Telling You by Martha Wainwright 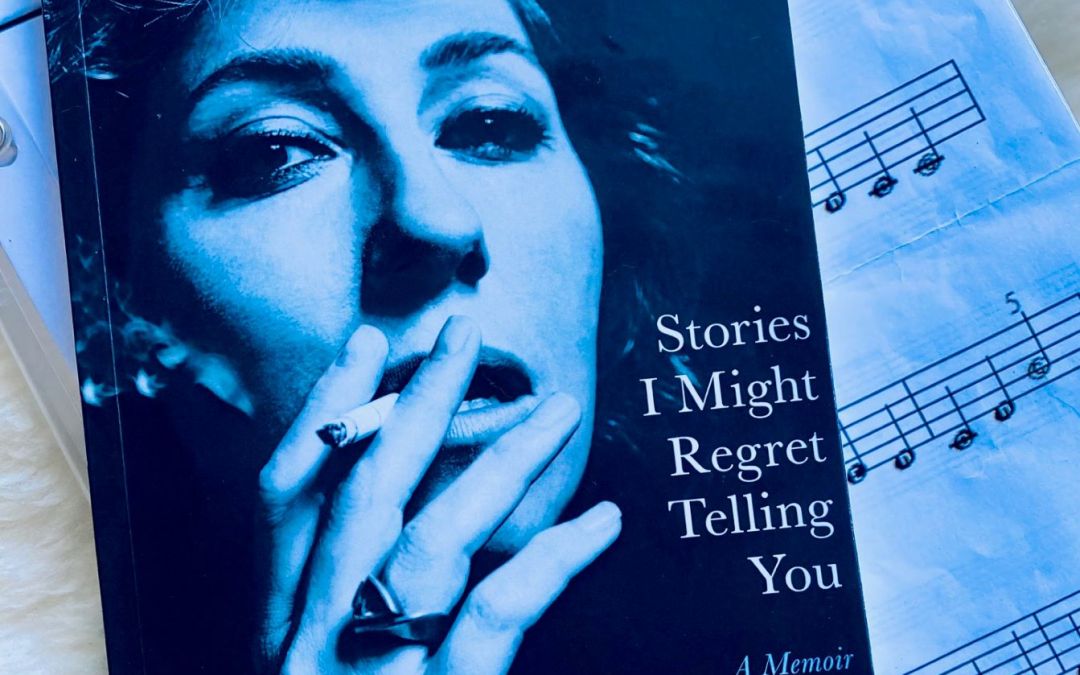 Picture yourself in a dark basement club in downtown Montreal, small votive candles burning away on each little table. Across from you is a woman with a raspy voice smoking a cigarette, telling you her life story in between sets on stage. She is surprisingly forthcoming considering you’ve never met, but she seems have this urge to tell you everything about her life, even the shocking fact that she was almost aborted save for a doctor speaking out minutes before the procedure was to begin. Stories I Might Regret Telling You by Martha Wainwright instantly transported me to this (fictitious) place in my mind because I was at turns enthralled, surprised, and weary of the life I was learning about. It’s impossible for me to imagine what it would be like to be born into a family of musicians, but Wainwright offers us a glimpse into this often hard-to-believe world in her memoir.

Martha Wainwright is a Canadian folk musician and the sister of better-known Rufus Wainwright; her father was Loudon Wainwright III and mother was Kate McGarrigle. Not being a big music person (books are quite obviously all I have the bandwidth for), none of these names really rang a bell for me, but the lack of familiarity actually worked in Martha’s favour, as I was much more likely to believe anything she tells me considering I don’t know any different. Martha lived through a somewhat challenging childhood – her mother travelled a bit for her work and was eccentric in her own right, plus her father was largely absent, even when she moved to New York to live with him. She struggled to differentiate herself from her family’s musical reputation and blaze her own trail, but she also did a lot of drugs and partook in many drinking binges while on tour herself, so she readily admits she self-sabotaged more often than not. The book also focuses on the death of her mother Kate, the birth of Martha’s two sons, and then her eventual divorce, so she is no stranger to grief, although it seems to fuel her creativity and artistry. There’s even some juicy little celebrity gossip, including the fact that Van Morrison hit on her in a “uninteresting and sad” way (p. 230 of ARC).

The feeling of intimacy is woven throughout this book is various ways; as I said, it feels like Martha is speaking directly to you, and only you, as the writing is very conversational in style – she throws in quips, self-deprecating jokes, and at times can jump back and forth from inner musings to the continuation of a story, so we get the feeling that she is learning about herself as she moves through these memories.

So much of her book takes place in the aforementioned clubs I was imagining; nothing too big because she’s not a huge superstar, but nice enough that the musical acts are taken seriously and people have paid to see just her perform. She happily writes about her debaucheries on the road with her crew and ex-lovers, but her thoughts on her family are the most honest, and interesting to read. Being born into a family of artists intent on growing their own careers can be a lonely place at times, and although she gives her father credit wherever she can in able to understand his distant manner, it’s hard not to see him as anything but a narcissistic jerk. She jokes about Rufus’ selfishness too, but being her brother, he is much less responsible for the obvious feelings of inadequacy Martha is fighting against, those which are so clearly rooted in her father’s apparent disinterest.

Even though it appears as though writing this book could be considered an act of catharsis for Martha, it’s clear that she’s had time and space to consider these major life events from a safe enough distance that now offers her a better perspective. She herself admits to self-sabotage when it comes to the partying she did on the road, and well before her divorce, she sees the signs of how destructive her marriage and relationship was on her mental health. But she also looks back on these times that she initially believed as heartbreaking, were actually incredibly joyful, unbeknownst to the pain ahead of her; death, divorce, and precarious childbirths were all in her future, but she was blissfully unaware of it all at that time, just focused on a difficult relationship and a blooming career with all its starts and stops. This book invites us to revel in the joy and despair of her life, all with some entertainment thrown in for good measure.