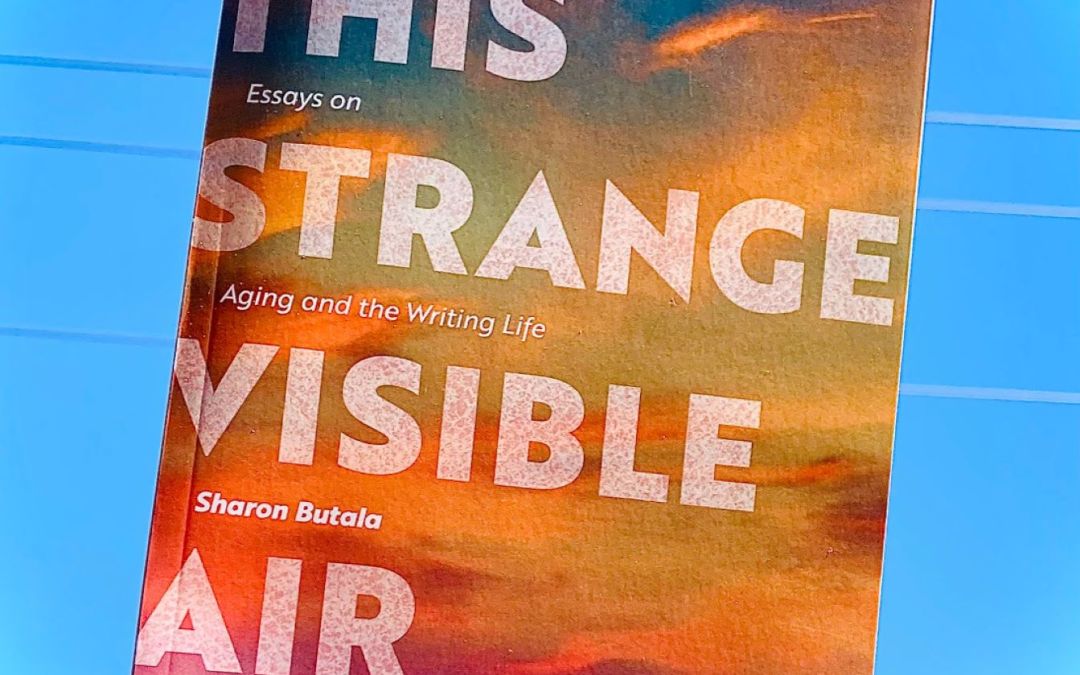 The subtitle of Sharon Butala’s latest book This Strange Visible Air is: Essays on Aging and the Writing Life. Maybe it’s because I’m keenly aware that my forties are now in my sights, or maybe it’s because I recently discovered I may have trouble digesting gluten and the thought of a life stretched out before me without a donut leaves me depressed, but a book of essays about aging seemed like the perfect read for me at this moment. I’m an out and proud fan of Butala’s work, I reviewed one of her books for a magazine a few years ago, so I knew to expect a well-written and thoughtful collection.

There are 15 essays in total, most of them thoughts and musings on Butala’s life as an 80-year-old woman living in Calgary, widowed and divorced, but still actively writing. They aren’t in any particular order, other than the last essays which is a short observation of the pandemic as it unfolds, clearly written at the very beginning when vaccines were only a distant hope for the future. As the title of the book suggests, the dominate theme is aging, and this thread can be found in every single piece, sometimes overcrowding any other observations, or simply a background fact while other situations take precedence. She writes of her past lives, that of a rancher’s wife, and an aspiring novelist before she had her first book published. One story focuses on a relative of hers with a severe drug dependency, an addiction that led her to push all family members away, and Butala’s fear of accepting her into her life again. Many stories touch upon the practical, including the smell of gas in her apartment that she tried to ignore before finally accepting contractors into her home to fix the issue.

Many of the situations she describes I can easily imagine in my future, because based on statistics alone, I am likely to outlive my husband by a significant number of years. Butala’s writing and her community of fellow writers is what seems to keep her busy and connected with others – she frequently refers to book launches, events, and readings she’s attended here in the city, holding that flimsy cup of wine that seem to be a prerequisite for those types of things. Before the pandemic (and now a bit recently) I’ve also been at those events, in fact I’ve seen Butala at those events because we both live in Calgary, and she’s always surrounded by friends and fans, so she’s most definitely lifted up by our tight-knit writing community here.

Her thoughts are relatable for many other reasons, one of them being her reluctance to ‘bother’ other people when feeling lonely, sick, or in need of assistance – haven’t we all felt that way at one point or another, especially when living alone? Despite our age difference, I found much to understand and sympathize with in this collection.

Butala’s experience taking the LRT in Calgary for instance, was an interesting one to read about, as I used to take public transit on a daily basis until I became pregnant with my first child. Now that ridership has dropped in Calgary following the pandemic, there is a major problem of people doing drugs openly on the train because they have no where else to go, and they are assured a bystander will likely witness and request help should an overdose happen. As I read Butala’s own story of riding the train before the pandemic I wondered if she was still taking it now as many have deemed it too dangerous, but she comes across as the type of senior that doesn’t avoid things out of fear – she is much too practical for that.

She has a great sense of humour that shines through the page in “Lettuce or Things I Can’t Do Now That I’m Old”, but where she really excels in this collection is her descriptions of how friendship has shifted and changed throughout her life, with female friendships being her main source of connection:

“Now I need companionship, serious conversations about life, a willingness to talk about our own less-than-stellar futures, someone with whom to share interests such as literature and the other arts, and a strong sense of mutual empathy whether we talk about it or not. My friends and I struggle determinedly not only to keep ourselves occupied doing interesting and enjoyable things, but to help each other in this.

-p. 78 of “A Life in Friends” from This Strange Visible Air by Sharon Butala

It may not a be a glamorous life, but it’s a life of comfort and companionship that one can look forward to nonetheless.