Book Review: A Dowry of Blood by S.T. Gibson 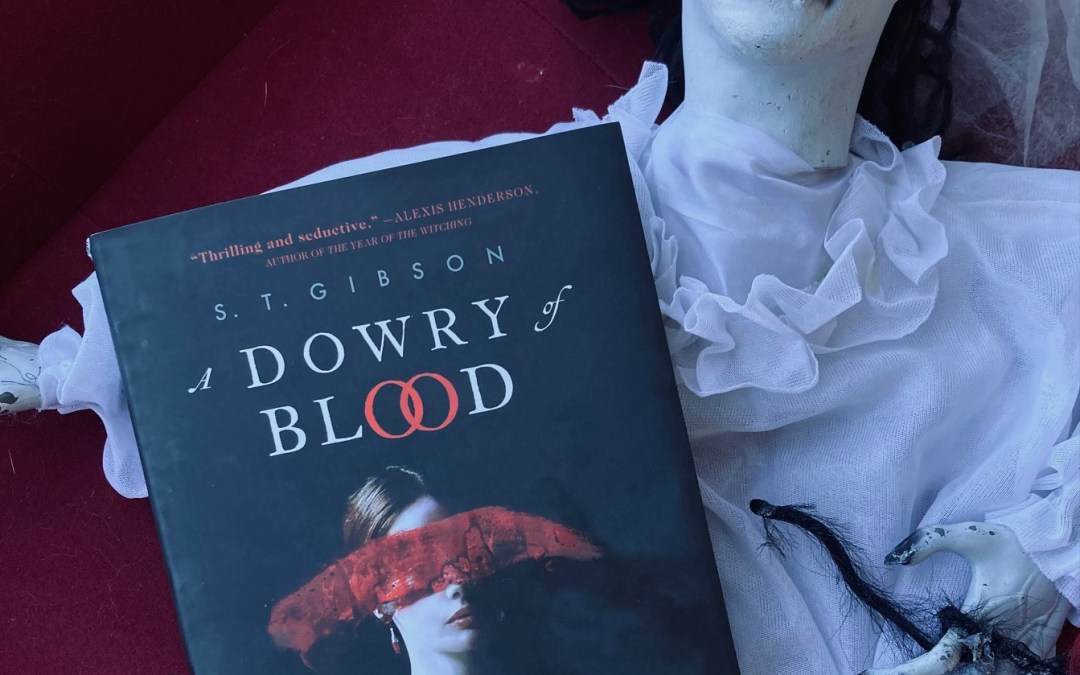 I’ve been a bit hesitant to read vampire books since the whole genre was overtaken by YA authors hoping to recreate the success of the Twilight Series. But when I saw that A Dowry of Blood by S.T. Gibson was an alternative re-telling of Dracula meant for adults, my interest was definitely piqued. Like many vampire books, this is a visceral story with a great deal of sex mixed in. And why wouldn’t it be, with everyone biting each other’s necks? So many Dracula stories involve a great deal of physicality, and this one is no different, but it also has a strong emphasis on power imbalances in relationships, made even more complicated by their undead forms.

Written as a diary, we learn in the first few pages that Constanta is Dracula’s wife (although his name is not written once throughout the entire book, it’s clear who she’s referring to), and Dracula is now dead. She’s writing this almost as an apology, or way of absolving herself. She begins in the moment Dracula ‘turns’ her; when she’s left for dead in a field after her village has been pillaged. On the verge of death Dracula gives her life and takes her as his bride, introducing her to a world of wealth and privilege she’s never known, but quickly asserting the control he expects to have over her. Dracula essentially barricades her in his castle, and aside from their very few servants, she doesn’t see anyone new for centuries. When the plague comes they finally flee to another property, but much stays the same, Constanta essentially a prisoner of her husband. Her life opens up when Dracula takes new partners. They are all lovers, but they all fear Dracula in equal measure. Centuries continue to pass this way until one day, they’ve all had enough of living under his unreasonable rules…

The damage of gaslighting someone is really put on display in this book, and even more horrifying is how it repeats itself with Dracula’s other partners as time passes. For those who aren’t familiar, the term gaslighting refers to manipulating someone deeply enough that they begin to question their own sanity. It’s a term that I see more and more often, and in many cases, it’s a precursor to emotional and verbal abuse in relationships. Constanta is dependent on Dracula for many reasons; she relies on him to teach her how to hunt humans to feast on, and because he’s the one with all the knowledge, she easily slips into a position of subordination, afraid to leave their home for fear of discovery by humans. She loves him like an abused wife and is desperate to keep him happy, but he hides his vampiric knowledge from her to maintain his control, and it isn’t until hundreds of years pass that she begins to realize he is a danger to her, his violence extending into their marital home.

I read this book fairly quickly – many chapters of this ‘diary’ are quite short, and because it covers hundreds and hundreds of years, it doesn’t dwell too much on setting or descriptions. We basically get a few scenes every few hundred years, the vampires themselves unchanging, but their feelings towards each other either souring, or growing deeper. This story was perhaps the first time I truly understood why immortality would be a curse; imagine living with someone for centuries! Even the strongest marriage couldn’t’ survive that, but a toxic one with a man like Dracula is downright scary. Sure the vampire scenes in this book are spooky, but the idea of marriage to his man forever is the most horrific part of this book.

After visiting the author’s website, it looks as though this book was originally self-published (or published by a much smaller press) and then picked up by a major press and reissued into the hardcover format I was sent by Hachette Canada. In this latest version, there is an epilogue of sorts, a short story tacked onto the end called “An Encore of Roses” told through the perspective of one of Dracula’s lovers that we met halfway through A Dowry of Blood. Again, sexy times ensue, but it also provides different facets to the characters’ inner lives that we didn’t get through Constanta’s diary, so it was a nice addition, and no doubt welcomed by Gibson’s many fans. Overall I was impressed with this novel; it’s a great example of a sexy vampire novel done well and deserves all the praise its received.