Book Review: There There by Tommy Orange 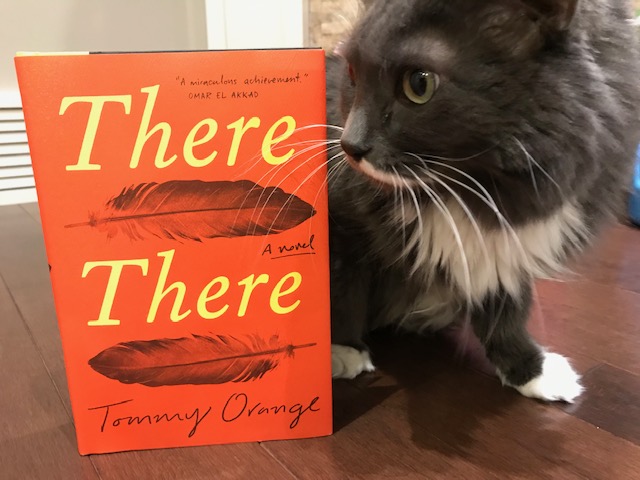 I love reading books written from an Aboriginal perspective. Everytime I do, I feel a bit closer to understanding an aspect of indigenous culture, which as a Canadian, comes with a new sense of urgency that I believe a growing part of our population shares in. You can read about my reviews of Canadian Aboriginal works here, here and here, but I don’t get the chance to read many American indigenous writers (the last I can recall is Sherman Alexie) so it’s a real treat to be diving into There There by Tommy Orange, a Native American writing about other Natives in Oakland, California.

This novel centers largely on the ‘urban Indian’ experience, which I’ve read about in other Canadian books, but because this book dealt with so many native characters in one place, it felt more in-depth and introspective. At the very beginning of the book we read a short introduction and summary of how the Native population was treated and massacred at the beginning of American history. The middle of the book includes an interlude which gives some surface context as to why the powwow is still important, and why the regular argument of ‘they should just get over it’ is an unfair and naive claim to make against Native reparations. The majority of the book consists of a snapshots of individual Native lives in Oakland. We meet over a dozen protagonists, each speaking in first-person perspectives about their life in the past and present. We meet young, middle aged and older Native Americans who are struggling to simply ‘live’. Some are struggling with substance abuse, physical abuse, or poverty, while others are simply lacking a strong identity. Most of them come together towards the very end of the novel in a major powwow in Oakland that leaves readers with a heavy feeling of dread up until the very last page.

Once I got used to the format of the book ( i.e. introducing new characters often without necessarily linking them to the other characters) I started to really enjoy the story. Many of the perspectives come from young, disenfranchised men. Unfortunately I don’t come across this first person perspective often in the books I read, so I found myself in situations I didn’t understand or anticipate, and I’m really grateful that Orange has focused on this often demonized (or ignored) segment of society. One young man, Edwin, is introduced to us as a constipated, socially awkward and overweight man struggling to find some direction, but the next time we meet him, he’s on a road to a better more fulfilling life with a new job and purpose. Jacquie has been sober for a few weeks now, and she’s determined to make things right with the family she abandoned years ago. Tony, his face marked by the ‘drome’ from his mother’s drinking while pregnant, is on the precipice of a dangerous and life-altering decision that will affect hundreds of people. Although difficult to keep track of at times, each character plays an important role in this story.

Identity is really at the heart of this novel, and this is the first book that has really made me stop and think about how privileged someone is if one is comfortable with/understand/inherently have their own identity. Each of these characters are weighed down by the history of their ancestors, what has happened to them, how they were treated in the past, and how they’re treated now. When people say ‘get over it’ to an indigenous person (or a person of colour), how could they possibly do that when everyone treats them differently because of how they look? The racism that Aboriginal people face (on a regular basis I’m sure) is just one simple but straightforward reason they are unable to move forward in a positive and healthy way. This realization is explored in this book through the back and forth struggle that some characters go through in attempting to reclaim a piece of their heritage. It’s refreshing to read about young people wanting to learn how to dance in their native regalia, yet the older generations are hesitant to teach them or pass along this knowledge with the fear it may tie them to a past full of horror. We all talk about how important it is for indigenous cultures to ‘learn the old ways’, but we never discuss how painful this could be.

As you can see, I found this book a real eye-opener for many reasons, and it would definitely warrant a re-read if I wasn’t already behind on my reading. So if you do pick this one up, which I recommend you do, have a piece of scrap paper handy to keep the characters and their relationships straight and you’ll do just fine. It’s also my book club pick for March, so join us at Memorial Park on March 27 for a discussion! Click here to register for that event.