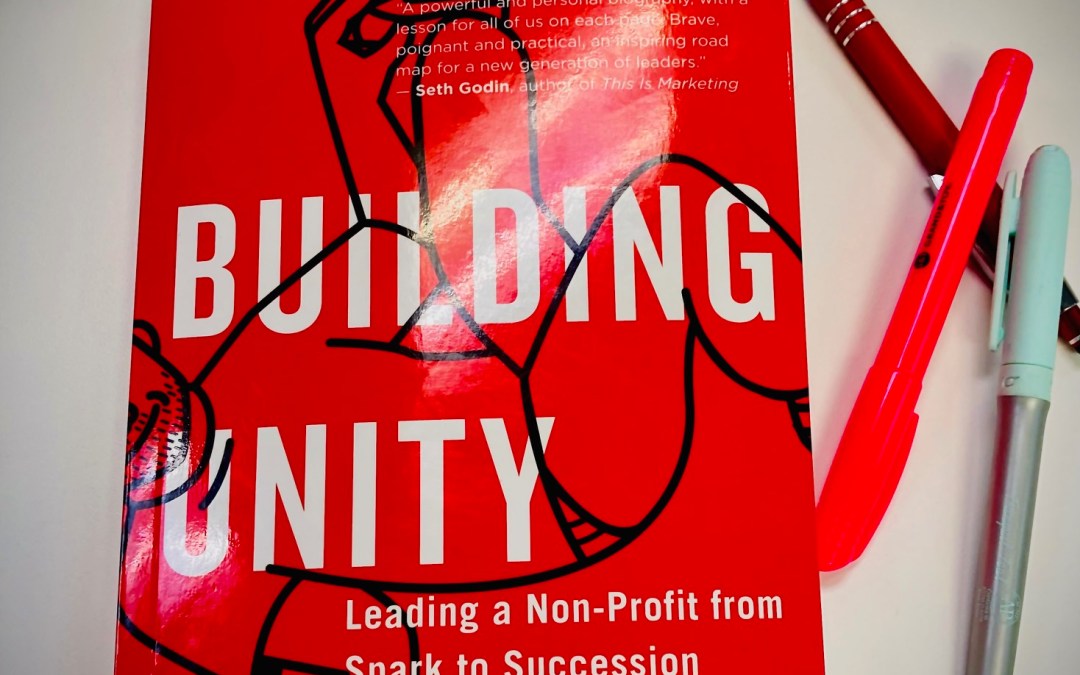 I recently posted a review of a novel that made me grateful for the job I currently have in the charitable sector, and by total coincidence, right after that I picked up a non-fiction book that outlines the challenges of working in the charitable sector. Building Unity by Michael ‘Piecez’ Prosserman is a memoir / self-help book for those who are trying to build an organization. Some chapters resonated with me more than others, but I dog-eared a whole bunch of pages related to his fundraising ideas which I plan on reviewing more closely at work. There’s lots of valuable lessons for any kind of leader in here though, not just people in non-profits.

Prosserman had a difficult family life as a child, and turned to break dancing to keep him happy and healthy as he grew older and entered high school. For a class project he started a program for youth like him who were struggling, and Unity, a national charity, grew out of that project over the next two decades of his life. In this book he details the ups and downs of scaling up this organization into what it is today. He also weaves in stories from his personal life, and the leadership lessons he experienced, including his ongoing struggles with debilitating anxiety. Another lesson he focuses on is learning to trust his team. Before starting this charity he had never really had a ‘real’ job, so all these workplace lessons he came across the hard way. At one point, he admits to asking his staff to cc him on every single email (!!!), but once they stage an intervention and explain to him how this is a prime example of micromanaging, he realizes his mistake and eliminates that practice. He eventually leaves Unity, hiring his successor and moving on to do consulting work, but his passion for the organization and its mission is clearly evident throughout the book, explaining many of his over-the-top requests like the one I mentioned above.

I’m still sorting through my thoughts on this one, having not quite decided how I feel about it overall. On one hand, I was frustrated with the scattered sequence of his story when he frequently jumps back and forward through time to illustrate a point. On the other hand, I found much to learn and enjoy as a fellow non-profit worker and fundraiser. In fact I’ve brought it to my office to record some notes and strategic ideas to help me reach my own fundraising goals. I was energized by his enthusiasm and can-do attitude, especially considering his success despite a lack of training or education in this sector. He left Unity at the ripe old age of 31, which for many, is just the beginning of their career. At that point, he had reached a high point that many won’t achieve through decades of dedication in an organization.

Not everyone is a born writer, although Prosserman is a strong communicator, the flow of his writing does need some work. A minor irritant was that his points were sometimes repeated, he would mention something as if it was news to the reader, even though he had talked about it earlier in the book. This is a small quibble, but as a reviewer I feel compelled to mention it. Aside from these editorial disappointments, his voice came through loud and clear, and I can tell he is an expert at demonstrating impact. And similar to other books in this genre, there were important parts of lessons highlighted in a yellow box – this signaled to the reader that we should pay extra attention to what’s written here, which was helpful to absorb more of the story he was telling. I also appreciated the fact that Prosserman revealed the mistakes his organization made, along with his own. Very few leaders are willing to pull back the curtain that far, and the story he told about a sponsorship event gone wrong made me cringe, but it was so valuable for me to read, as it was a lesson I need to keep in mind in my current role too.

Vulnerability is key to this text; it shines through in Prosserman’s personal stories, infusing this self-help book with relatable knowledge that many will be more willing to absorb, as it’s coming from a place of respect and modesty. I also haven’t mentioned the beautiful book design yet. It’s a paperback with flaps, and includes custom graphics of little characters break dancing their way through paragraphs. I love how this book doesn’t take itself too seriously, and for anyone working in an non-profit leadership role, they would certainly benefit from reading it.