I just finished reading a great mystery by a great Alberta author. And by the way, he’s also got another job as a rodeo announcer, when he’s not writing (see video below).  David A. Poulson has written over 20 books, some for kids, some for adults, but according to the acknowledgements at the end of Serpents Rising, this is the book he’s wanted to write all along, but never had the courage to until now.

I can understand that hesitation, especially after reading the influences that led him to love and eventually write his own mystery book. Sir Arthur Conan Doyle, Agatha Christie, Ian Rankin and Peter Robinson were just a few of the names that he listed, but as any mystery lover knows, those are some pretty heavy-hitters! Although Serpents Rising wasn’t written in the same style that these authors are known for, it’s obvious that Poulsen knew enough about the genre to create a decent attempt at what he loved for so long. 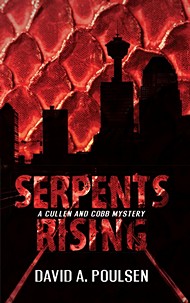 Serpents Rising is set in Calgary, Alberta which is one of the reasons I picked it up. For some reason, I love reading books set in my own city, and Poulsen clearly enjoyed working within this setting, picking many well-known locations for his plot to unravel in. He also gave the main character Cullen a very Calgary-esque job as a former reporter for the Calgary Herald, now a freelance journalist. All locals know that full-time Calgary Herald writers are hard to come by now, so the narrative was clearly well researched.

Is it necessary for the bad guy to always be a complete surprise to the reader in a mystery? No, I’ve certainly read enough mysteries that don’t contain a twist at the end when revealing the perpetrator. However, I must admit I’m always a bit disappointed when the killer/thief/criminal ends up being someone you suspected earlier on. I won’t include any spoilers here, but I will say that I wasn’t at all surprised when the culprit was revealed. Please surprise me!!! Especially if you’re just beginning the series (the cover of the book says it is a “Cullen and Cobb Mystery”), I’m expecting more to come in the future and I want to be wowed from the very beginning.

Regardless of the final result, the lead-up to the climax was interesting, and kept me reading at a faster pace than usual, so that’s always the sign of  not only a good writer, but a budding mystery writer in the making. I do hope Poulsen continues with this series, as I’d love to see what Cullen and Cobb get up to next. But he needs to step up his game, as the mystery market is crowded as is, and readers need that last little push to pick up one book over the next.