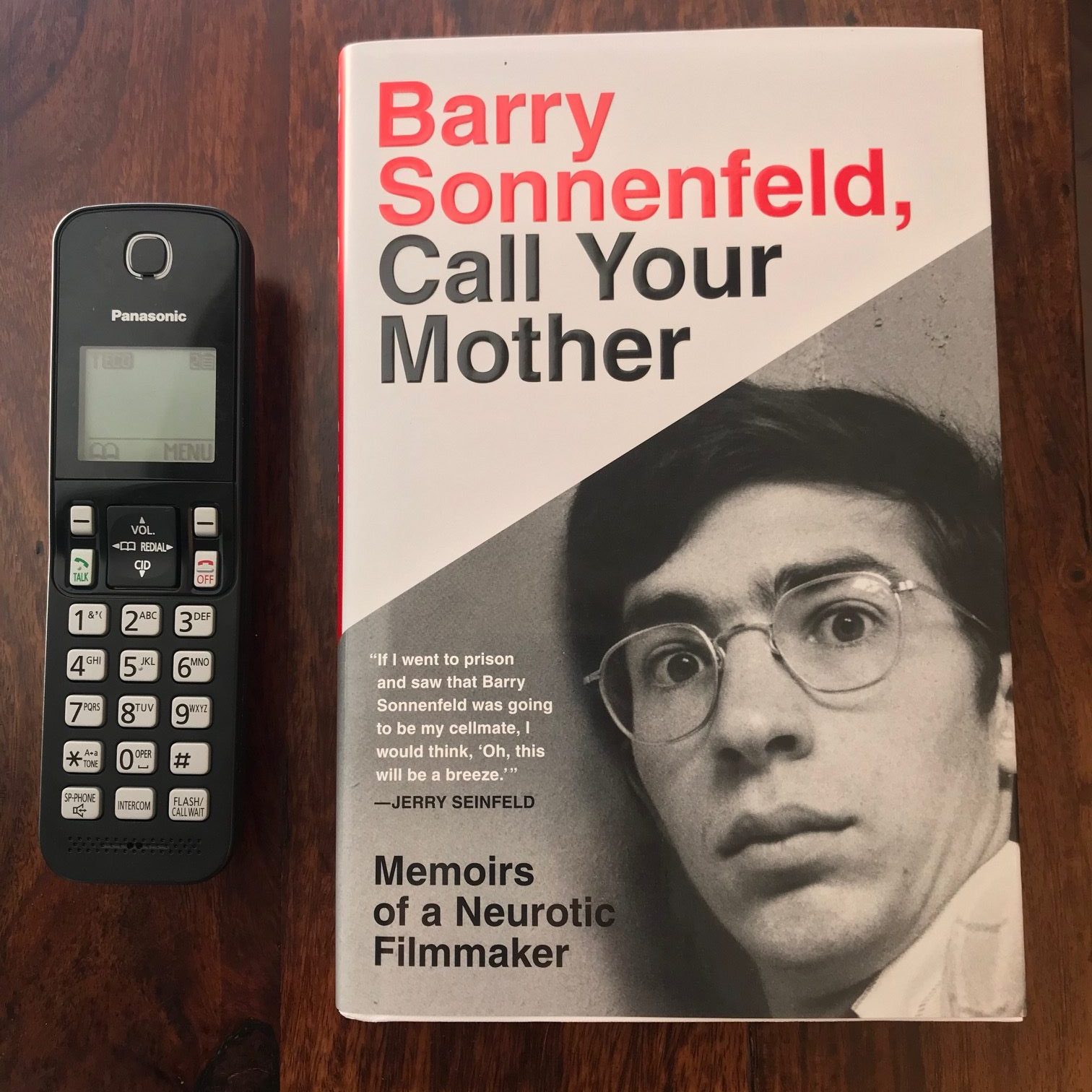 I had never heard the name Barry Sonnenfeld before I read this book, probably because he’s a ‘behind the cameras’ kind of celebrity. He’s a well-respected filmmaker and director who made movies like Men in Black and The Addams Family. He’s got a bunch of famous friends who thinks he’s weird but hang out with him anyway , and he’s a hilarious person, so reading Barry Sonnenfeld, Call Your Mother is highly entertaining, and therefore, highly recommended.

A memoir that spans the decades between childhood and middle-age offers a myraid of opportunities to highlight only the lowest and highest moments of one’s life. Sonnenfeld has clearly been filing away these stories for just this purpose, as each story he recalls seems more and more unbelievable. To begin with, his parents are…odd. His mother is overbearing and over-dramatic, even threatening to kill herself when Barry tries to leave home for college. His father is unreliable, distant, and sneaky, cheating on Barry’s mother regularly. Yet, despite their ‘quirks’ (I’m being generous here), Barry remained somewhat close to both of his parents, and although he complains incessantly about their problems, it’s clear he cares deeply about them.

The development of his successful film career is fascinating to read about, but not always pleasant. Right after graduation he spent a short time filming pornography and he includes a particularly disgusting story that I will do my best to try to erase from my memory, although I suspect it will stick around longer than I’d like. He eventually meets his soulmate, nicknamed “Sweetie”, who at the time of their meeting, is married to Barry’s boss. She’s also pregnant with their second child when Barry enters the picture, so it seems like a miracle they are still together to this day, considering the unusual circumstances of their initial meeting. This whole thread of ‘true love despite the odds’ brings a much-needed sweetness to the book, as the narrative is dotted with some vulgar scenes.

The second chapter is titled “CM the CM, Part 1”, which stands for Cousin Mike the Child Molester. Although Sonnenfeld doesn’t dwell on the abuse he suffered at the hands of CM, it’s hard to ignore how difficult it is to reconcile a ‘laugh-out-loud’ memoir with the fact that Sonnenfeld was molested by a male relative of his, which his parents were more or less aware of. He seems to pride himself on the fact that he grew up relatively stable and normal despite this abuse, but the reader can’t help but wonder if that’s really possible-how could it be? I know it doesn’t seem this way, tut this book IS humorous, Sonnenfeld writes in a self-deprecating way about how neurotic he is (he blames his mother for this trait) so he only glosses over these difficult memories, using them as justification for why he can’t trust his parents. The inclusion of this aspect of his life, a disturbing one that is more or less breezed over, is probably the only part of this book that I was truly confused by. It feels unfair to use such a serious issue for the purposes of humor, but the decision to leave it in must mean it represents a critical part of Sonnenfeld’s life story. Obviously it’s not for me to judge how one person reacts to a difficulty in their life, but I suspect other victims of child molestation may be offended in the way it’s dealt with in this book.

Aside from the issue mentioned above, I genuinely laughed out loud while reading it. Like David Sedaris’s essays, it’s hard to imagine all these things happened to one person alone, but he has an engaging style of writing and conversational tone that draws you in despite these suspicions. His leg-wrestling competition with Kelly Ripa, his toilet-paper message to Will Smith, and his strange conversation with Warren Beatty are all highlights you have to look forward to if you pick up this book. And the numerous airplane stories are shocking but somewhat calming to read about, even for a nervous nelly like myself. For those who need a book to distract them from what’s going on in the world (who doesn’t?) this is a good option, aside from the potentially triggering CM references. Celebrity memoirs continue to be a popular genre, so if you’re looking for another life story to laugh along with, Sonnenfeld is most certainly your man.