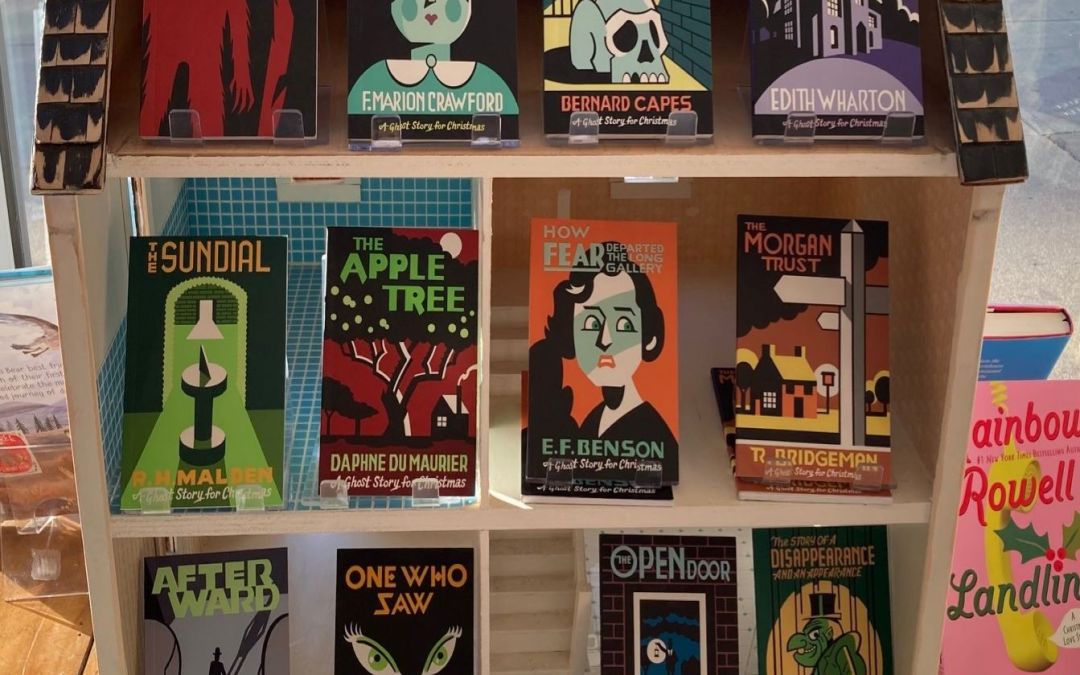 I was mildly aware of the old Christmas tradition of reading spooky ghost stories on Christmas Eve thanks to the historical knowledge and research of one of my favourite book bloggers, FictionFan. So you can imagine my delight when I received a package of three perfect little stocking stuffers from independent press Biblioasis as they revive this tradition of reading ghost stories for the holidays. At the beginning of each of the 20 volumes is a little explanation:

“During the Victorian era many magazines printed ghost stories specifically for the Christmas season. These ‘winter tales’ didn’t necessarily explore Christmas themes. Rather, they were offered as an eerie pleasure to be enjoyed on Christmas Eve with the family, adding a supernatural shiver to the seasonal chill”.

Beautifully packaged, each is illustrated by the well-known Canadian artist Seth. His designs are incredibly distinctive, and each book has a few of his illustrations interspersed throughout, enough to enjoy but not enough to distract from the story itself.

The first I read was Mr. Jones by Edith Wharton, originally published in 1930. Not having read anything else by this famous author I wasn’t sure what to expect, but I wasn’t disappointed! A young woman inherits a beautiful country estate that comes with its own staff and she’s excited to make it her home and embrace rural living. However one member of her staff, Mr. Jones, whom she’s never actually spoken to, is clearly in charge and a bit of a bully, preventing her from even entertaining in her favourite rooms for fear of reprisal from him. When she’s finally had enough of this impertinence, she goes in search of this famous Mr. Jones, but what she finds is not what she expected…

Next was An Eddy on the Floor by Bernard Capes, originally published in 1899. Not familiar with this author, again I was readying myself for anything, and the nature of this ghost story was quite unique. It’s a longer one, told from the perspective of a man hired on as a prison doctor. While there, an inmate refuses to stay beside cell 47 which he claims is not empty, although it clearly is to the naked eye. So, this doctor insists on being allowed inside the cell to investigate, and a guard reluctantly allows it after much threatening. Although the doctor doesn’t see anything out of the ordinary, it sets off a chain of events that haunts the prison staff forever!

Last but certainly not least I received The Doll’s Ghost by F. Marion Crawford, originally published in 1896. As the title suggests, haunted dolls are indeed terrifying, but this book is more about a dollmaker and his obsession with fixing his dolls. One night he sends his daughter (who also helps him fix the dolls) out to return a doll to a client, but he’s so in love with this doll he’s sending away he can’t even bear to watch his daughter leave with it. When she doesn’t return, he goes out in search of her, upset with himself for sending her out in the evening. Then he starts to hear voices, and in his desperation to find his child, he wonders if he’s losing his mind, or something else is at work.

Christmases past I’ve reviewed the short story advent calendars published by Hingston and Olsen, but I knew I wouldn’t have time to undertake that project this year, although I do miss reading a new short story everyday! Having these cute little stories to dive into were a nice treat that made me realize how much I enjoy sitting down for a short spell and getting through an entire story in one sitting – it’s so satisfying, made even better with the idea that I’m following in the footsteps of people from over a hundred years ago. Some may have trouble muddling through these texts because the way people wrote back then can be hard to understand at times, but as long as you slow down, it becomes clear enough. And you’ll want to take your time and savour these, it’s a unique experience to scare yourself in front of the Christmas tree.