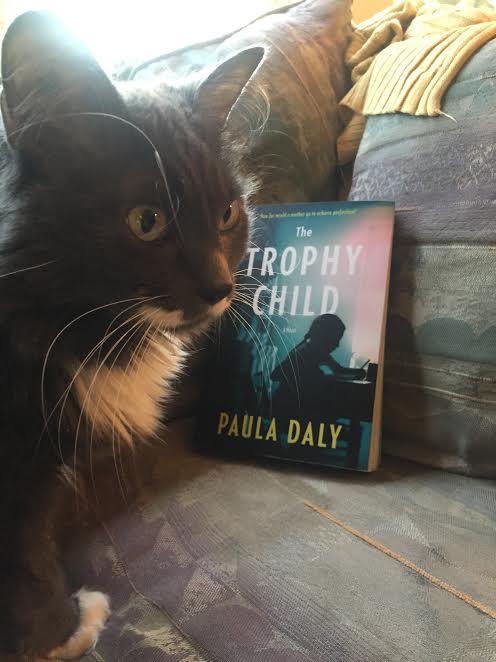 So I’ve got my second video post up now (see below), it’s a review of The Trophy Child by Paula Daly. I’m really hoping that the quality of this sophomore video attempt is better than my first one, I used a different piece of software to record it, and I paid a whole 25 bucks for it, so I’ve got my fingers crossed that wasn’t spent in vain.

You may notice that Smokey is a little squirmy in this one, which was super annoying to say the least. I gave her her treats as usual, which didn’t seem to work their usual magic for some reason. Although my face looks relatively calm during the recording, I’m really thinking “frig Smokey, just lie motionless in my arms like you normally do.” It’s like she knows I need her as a prop in these videos so she’s just making me dole out more treats than necessary. Plus they’re expensive ‘healthy’ treats from the vet, yet another expense for this damn YouTube channel. Perhaps Pearl will make an appearance in the next one, we’ll have to see what her anxiety levels are currently at.

Anyway, as my video suggests, I really enjoyed this book. It’s a domestic thriller, which essentially means the murder and mystery all takes place within everyday, family-like settings. Gail Bowen is another great example of a domestic thriller writer, so I knew I would enjoy Daly’s book as well when I saw this book described the same way. I’ll admit that the idea of reading about a “tiger mom” gone wrong really hooked, simply because it assuages my guilt of being the lazy mom I sometimes feel like. The murder victim Karen Bloom (aka overbearing parent) is literally the worst person in the world so there are no shortage of suspects when she turns up dead. I should mention that the husband/father in this book is also a terrible person, so by the end of the book there wasn’t many people that were free of judgement. This all makes for a great murder mystery, so you won’t be disappointed by this book.