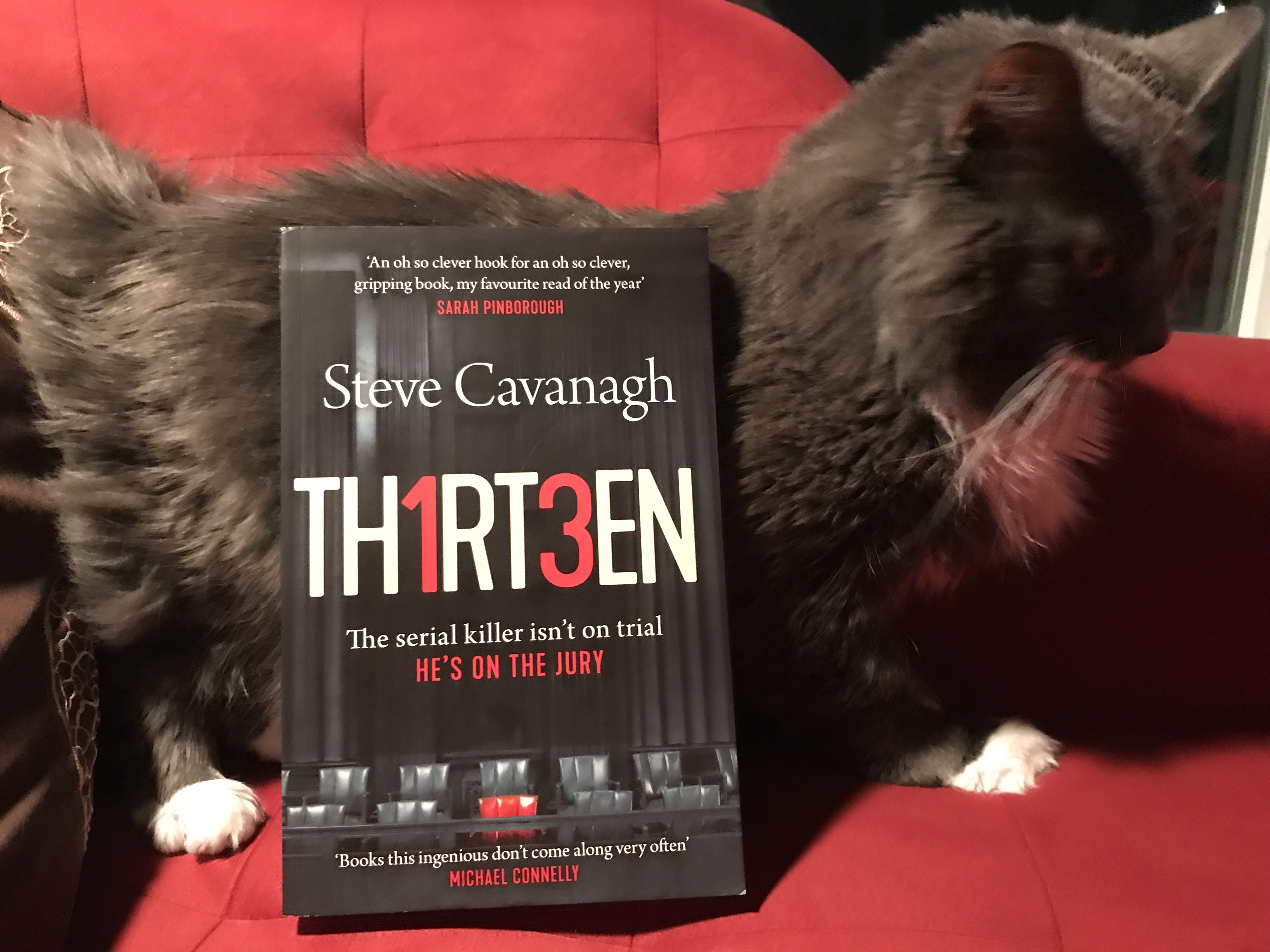 I’m beginning to think I’m the only one who hasn’t heard of Steve Cavanagh. This book, Thirteen has been tucked into my TBR shelf for far too long, as I had scanned the premise when I received it last year then promptly forgot about it, even though I was intrigued at the time. Over the holidays I was able to pick up books that I just haven’t gotten to, and this was one of them. It’s been blurbed by a ton of high profile writers, and apparently Cavanagh has signed a six-figure deal for his next two books, so I feel like I’ve been hiding under a literary rock for far too long to have ignored this guy. But, I’ve finally read it and enjoyed it, so here goes my review.

The tag line on the front of the book reads “The serial killer isn’t on trial, he’s on the jury”. And even though I knew this going into the book, I wasn’t entirely convinced the murderer on the jury committed the same crimes he was witnessing testimony for and I won’t spoil it for you! But that’s basically the point of the book; we are immediately introduced to a serial killer who’s picking people off to ensure a place on this particular jury. While that’s going on we are also following the defendant’s lawyer Eddie Flynn who’s trying to get his hollywood actor client off for a brutal double murder of his wife and bodyguard. So, lots of suspicion being thrown around, and Cavanagh is such a good writer that I wasn’t sure of ANYTHING until the last few pages of the book.

The story is told in alternating perspectives between Flynn and the serial killer. Interspersed with these are one-page law documents analyzing each potential jury member that the defense prepared. About half of the book takes place in a courtroom; I find you either love or hate this type of storytelling, but personally, I enjoy it. The lawyer lingo isn’t relied on too heavily so a layman like myself could follow along easily, and the personalities of the supporting characters are intriguing enough to keep a large cast straight in your head, even though there’s lots going on.

Eddie Flynn is the protagonist of Cavanagh’s most recent series, so apparently he’s the reason this author is now making the big bucks. I don’t have much to find fault with in this book, other than Eddie himself. Now keep in mind I haven’t read any other books in the series, which is maybe why I didn’t feel a connection with Flynn, but what I DID learn about him (a defense lawyer with a shady past, has a drinking problem he’s trying to control, left his personal life in shambles, just wants to get the bad guy, etc) falls into the stereotypical detective trope, and I was hoping for something a bit more creative, considering the plot of the novel was so unique. That being said, this didn’t hinder my enjoyment of the novel in any way, it’s just one weak point.

There’s some great twists in this book, but they aren’t gimmicky. Cavanagh is a great storyteller, and his killer is just creepy enough to give you chills everytime you find yourself in his head. There’s a gruesome reveal about him towards the end of the book that I gasped out loud to when I read it, and I could easily see this playing out on a screen before me-it’s only a matter of time until Cavanagh gets a movie/television deal out of these books. So for those who enjoy a good courtroom drama with some suspense and thrill in the background, you’ll definitely want to pick up Thirteen.