Book Review: The World According to Bob by James Bowen 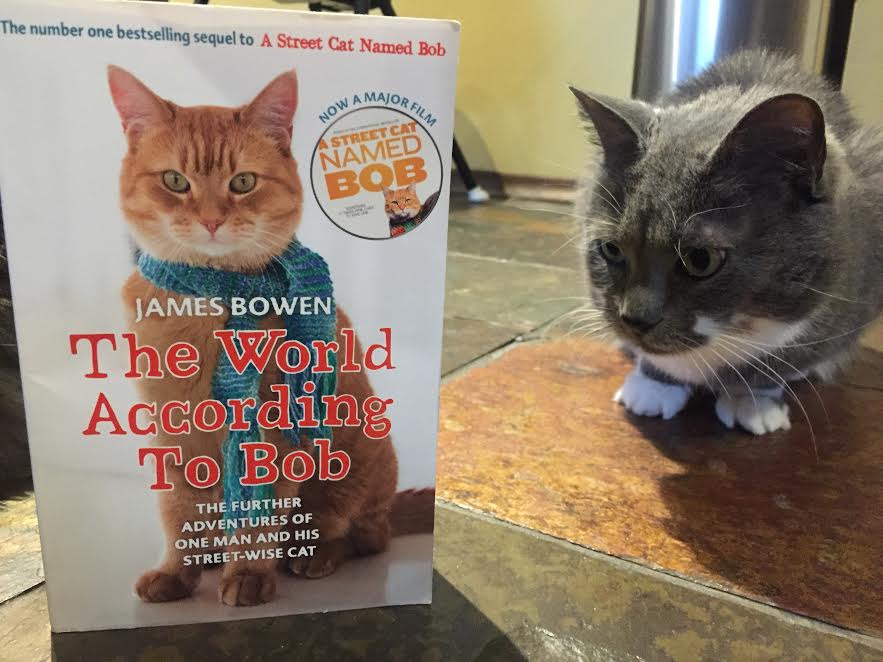 A fellow book blogger had reviewed a ‘Bob the Cat’ book a few weeks ago (sorry I can’t find the post again!), and it prompted me to track down The World According to Bob, The Further Adventures of One Man and His Street-Wise Cat by James Bowen. This memoir is the sequel to Bowen’s first book A Street Cat Named Bob, which details the beginnings of his friendship with the special cat. This most recent book includes more tales of the famous duo, plus the development of Bowen’s book deal which changed his life forever.

For the record, you don’t have to read the first book to understand this second one. I didn’t, I just watched the movie on Netflix (yes, it’s available on Canadian Netflix!). Honestly though I didn’t even have to watch the movie to catch on to what happened in the first book. Basically Bowen struggled with drugs, he was homeless, and came across this stray cat “Bob” who became a his unflappable companion. Having a pet helped him get clean and make more money busking because apparently having an animal that’s as clever and sociable as Bob really makes people more generous.

If you follow this blog regularly, it will be pretty obvious to you why this book appeals to me. If you’re new, I’ll give you a clue: its got four legs, and is super cute and furry. Bob is, not surprisingly, the real gem of this work of non-fiction, which is why he’s featured so prominently on the cover. And, in every picture of him he’s wearing a cute miniature scarf, because apparently his fans knit them for him (can you hardly stand it?). His owner is not so picture perfect: bad teeth from a life lived on the street, and obvious twitches and discomfort from years of heroin use. But this is why the story was a bestseller, because they are such an unlikely pair. And although Bowen has his faults, he seems like a very generous and forgiving person, despite his difficult past.

I also enjoyed this book because of the fairy-tale like story of Bowen’s book(s) being published. Although EXTREMELY RARE (I capitalize this for all those people with high hopes of becoming bestselling authors overnight), it was still fun to read about, especially because videos of Bowen and Bob are  easily found all over the internet so you can see their success in action.

I will mention that for book snobs like myself, the writing was a bit disappointing. There are lots of obvious repetition between chapters, which makes it seem like the editors simply smashed a few stories together and called it book. But even if that is how this came about, I nevertheless enjoyed it, and any cat-lover will definitely feel the same.