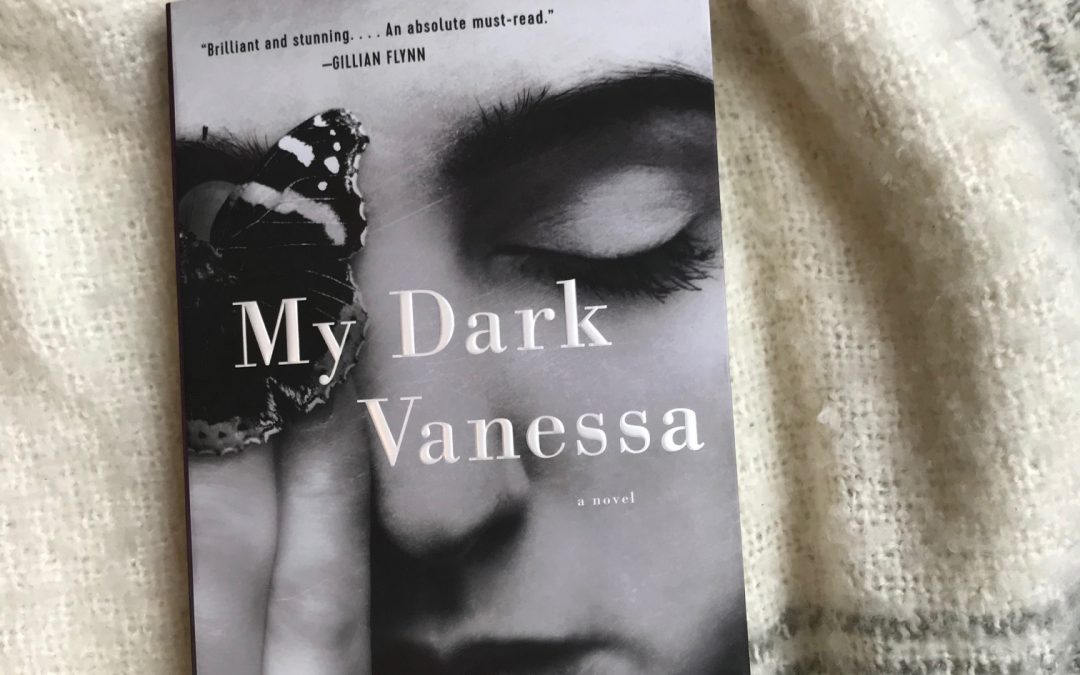 Do I love to read a book that’s stirred up controversy? Of course I do! Who doesn’t? I always want to see what all the fuss is about, even though I know I’m willingly jumping on a bandwagon that doesn’t need another rider. My Dark Vanessa by Kate Elizabeth Russell has the been source of many tongues wagging, and this article from the Calgary Herald does a great job of summing up why. However, I first heard about this book from Shelley Youngblut of Wordfest, who fell in love with the novel back at the beginning of 2020 and insisted I read it. HarperCollins sent me a copy of it just a few weeks ago, and I immediately picked it up because I was desperate to get on the aforementioned bandwagon. What a ride! It’s a dark but fascinating read, and despite its almost 400 page count, it only took me a few sittings to finish it.

Vanessa is our protagonist, and we view the world through her eyes only. She begins a relationship with Strane, her 42-year-old high school English teacher when she is 15 years old at a prestigious boarding school she attends on scholarship. Always struggling to fit in with people her own age, the attention this older man throws her is irresistible, and they embark on a clandestine relationship that narrowly misses discovery every few months. We jump ahead and find Vanessa when she is 32-years-old, working as a hotel receptionist and numbing herself after hours with drinks, drugs, and strange men. She has kept in touch with Strane, and he emotionally leans on her when harassment accusations are leveled at him from other girls at his school. The narrative moves back and forth from Vanessa as a teenager to Vanessa as a young woman, the imprint of the abuse she suffers at Strane’s hands building up an invisible wall between her and her friends, family and future.

Some people have called this book disturbing, and for anyone who has experienced sexual abuse, rape or harassment, it no doubt is. Vanessa is embroiled in what she tells herself is a consensual relationship, but she finds herself on a continuum of feelings towards Strane; love, hate, fear, resentment, embarrassment. As a woman this rings true to me, because it’s not surprising that she believes she is in love with him, and that he loves her back, even if he forces himself on her. Vanessa’s experience truly highlights the fact that abusive relationships can take all forms, and the way women are put on trial at sexual harassment and abuse cases always yields mixed, often disappointing results. Society expects victims of a particular crime to exhibit specific responses, but victims of crimes such as sexual abuse and harassment can suffer from PTSD, which is why their responses are varied and misunderstood. Vanessa is torn between believing she was a willing participant in this relationship with this much older man, and resenting him for continuing to have such a strong hold on her as she ages. And despite Vanessa’s conflicted feelings there is no escaping the fact that he was the adult and he took advantage of a child. And even though he is not depicted as a villain in the book, most readers will see through his actions and understand he is ultimately at fault.

The affects of Vanessa’s abuse manifest themselves in many strange ways throughout her life, one of them being the strange obsession she develops over younger women. At one point in the book she offers some cigarettes to two teens, and she revels in their presence:

“When I’m around girls their age, the magic age Strange taught me to mythologize, I feel myself become him. Questions pile up in my mouth, ones designed to make them linger. I bite down hard to keep them from pouring out…(p. 109). “

This is obviously a very troubling quote, and I worried that after I read that, Vanessa’s character would then become an abuser, as we know, so happens very frequently with victims of abuse. Thankfully her curiosity stops there and we don’t see her continue the cycle of abuse, but even this mere suggestion of it is chilling. The overall tone of the book is dark like this, and situations are constantly on the verge of exploding out of control. But like Strane and Vanessa’s relationships, most things happen underwater, beneath the currents of visibility.

If you’re interested in reading this book (and I think you should!), I recommend watching this online interview with Russell for Wordfest, it gives a thorough synopsis of the novel and will prepare you for what to expect. I’m surprised this book doesn’t come with a trigger warning because its content is so difficult, but it rewards readers with thoughtful characterization and a propulsive plot.