Book Review: The Narcissism of Small Differences by Michael Zadoorian 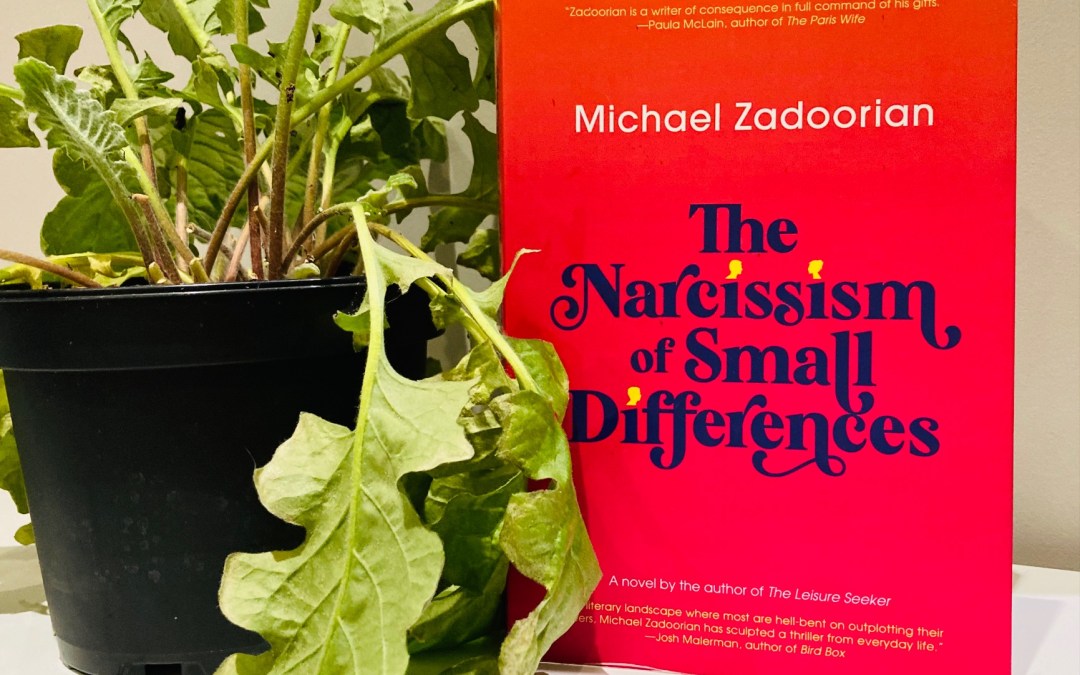 Over a year ago, I chose this book from a publisher catalogue because the premise appealed to me; it’s about a stagnant romantic relationship between two people who are living together, with no kids, and conflicting job schedules and work ethics. Many people would label them as narcissists, which is why I wanted to read this book so badly. My faithful readers will know by now that I am fascinated by relationships, and the mundane realities of those you live with. The very fact that this book centers on just that, the day-to-day life of Ana and Joe, is what appealed to me. The Narcissism of Small Differences by Michael Zadoorian is about two people on the cusp of their forties, but it’s also about our life choices, how we compare those choices to others, and why we follow a particular path in life, whether it’s based on convenience or conviction.

It’s Detroit in 2009, and Ana and Joe live a comfortable, childless (by choice), existence. Joe is a freelance writer and critic, barely scraping by with his articles on pop culture, movies and music. He has a fascination with the crumbling and abandoned buildings that are so common in Detroit at that time, plus he always had plans to write a novel, but he’s also embarrassed that he makes so little money compared to his partner Ana, so he does nothing about either of his passions. Ana works long hours at an advertising agency and she is the main breadwinner of their house, which she is both proud of, and resents. It’s been months since Ana and Joe slept together, and their small and inconsequential interactions are grating on each other more than usual. There are no major conflicts or plot twists to point to in this novel, instead, it plods along with Ana and Joe as they navigate adulthood over the course of about a year. Joe ends up taking a job he considers ‘selling out’ while Ana’s work increases to the point of exhaustion, especially when her agency takes on a few clients with questionable ethics. It’s really just about their life: their fairly average, comfortable existence.

Not surprisingly, this is a character-driven novel that drills deep into both Ana and Joe’s psyche to drive the storyline. Joe frequents a few local bars with his friends, and it’s not until they bluntly tell him he needs to grow up and find a real job that he easily slips into a fairly well-paying job despite his misgivings about the paper its a part of (it’s called “Dollar Daily”). As he quickly learns, working full time sucks when it’s something you don’t love, but he feels good about finally contributing to the household expenses in a meaningful way. Ana on the other hand, makes a somewhat out-of-character decision that adds what little drama this novel holds, but instead of focusing on the fallout, the narrative centers on this internal implications of this decision, rather than the inevitable bomb it could erupt in their relationship. It’s as if the author is choosing the more difficult story to write, Zadoorian ignores that larger issues to pick away at the minutiae of their days. Some readers will avoid this book for that very reason, but this stylistic choice fascinated me.

In the accompanying press material for this book, many people refer to this book as a comedy of manners, which I have to say, did not ring true for me. There was nothing particularly comedic about this book, nether Ana or Joe were funny, and not much happened that would elicit a laugh from anyone. It’s not depressing, but it’s certainly not hilarious either. I love a good comedy so I was disappointed this didn’t offer any humour, but it wasn’t the driving force for me reading it either. Ana and Joe’s situation isn’t funny, but giving either of them a sharp or sarcastic tongue would have helped to lighten the moods between them, especially because their conversations often turned into arguments, stemming from Ana’s defensiveness or Joe’s obliviousness. Thankfully their sparring matches don’t last long (no one wants to read pages of a couple arguing, not even me!) but we get enough of it to see the roundabout way in which they talk to one another. It doesn’t take a couples counsellor to see where they are going wrong.

I’d like to end this review with a question for my fellow bloggers; Joe admits that he sells his review copies to make a little extra cash, and claims everyone does it. Perhaps us book reviewers just seem to be a particularly upstanding bunch (or maybe it’s because books aren’t worth as much?), but I would never dream of doing this, and I understood that most book reviewers would never do this either. Have you come across any reviewers who sell their gifted copies after they read them? Am I just a goody two-shoes?