Ivereadthis Jr. Edition: Spring Picture Books That Have Nothing to Do with Spring 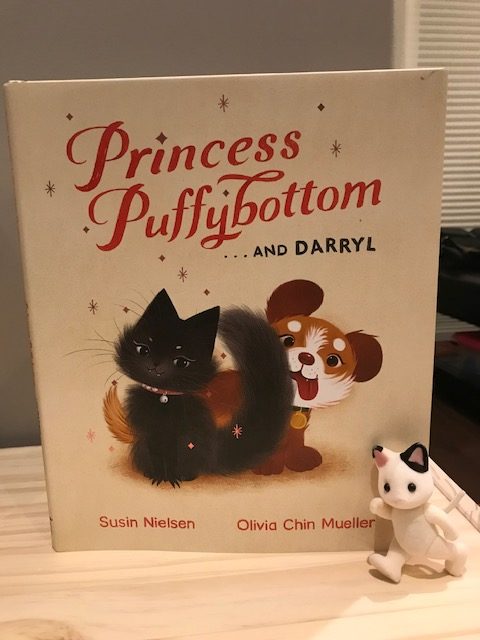 Clearly I struggled to come up with a theme to tie all these picture books together, but sometimes I just get a bunch of kids books in the mail, so I decided to write a blog post about them. All of these titles are newly released this spring, and if your household is anything like mine, this is the season of birthday parties each and every weekend, so why not give the gift of books? They’re the best gift to get anyone, especially kids, because lord knows they don’t need anymore toys.

I’ll start with my daughter’s favourite. She loves Princess Puffybottom…and Darryl, written by Susin Nielsen and illustrated by Olivia Chin Mueller. It stars a beautiful black cat with a royal moniker who lives a charmed life with her owners, doted on at every turn and happy to live the life of a princess. But then Darryl the dog shows up, and he’s gross (like a regular dog) and she’s unhappy about this new intruder in her domestic bliss. But when her sadness gets worse and worse, her owners don’t notice, only Darryl does. So, Princess begins to appreciate Darryl for the positives he does bring into her life, for example tipping over the garbage pail so Princess can also indulge in the forbidden treats.

The illustrations are adorable, which is why my daughter loves it. Darryl does silly things like chase his own tail and bark at mirrors, which Princess looks down upon with disdain, and Mueller has a real knack for creating such expressive faces on animals. What I liked most about this book (because let’s be honest, it’s about me too, I’m the one reading it out loud over and over again!) is the fact that there’s a more subtle story going on in the illustrations which most kids probably won’t pick up on until they’re older. The owners are actually two women in a romantic relationship, as depicted by the fact they sleep together in the same bed, hold hands, etc. And! One of them is pregnant. So the last page of the book is about Princess resting peacefully, relaxing into the belief that Darry’s arrival is the only challenge she’ll have to face while in reality her owners are bringing home a brand new baby. The pregnancy storyline is told entirely through the pictures, the words don’t reference it at all (very clever!).

I’m not sure what came first-the illustrations, the story, or the concept for this story, but it all works so well together. Plus, it’s a wonderful thing to notice so many same sex couples found in kids books these days. Kids’ comfort with same sex relationships has always been innate, luckily our society is finally catching up to the concept that it’s a positive thing to love whoever you want. Did I mention there are sparkly stars on the cover of this book? That’s another reason my daughter loves it.

For those who like to display children’s books on their coffee table even when they don’t have kids (I know you’re out there!) the clever shapes series by Mac Barnett and Jon Klassen will most likely look familiar to you. It features three books, each with no title on the cover, simply a shape; triangle, square and finally circle, which is the book I’m reviewing here. Design enthusiasts love when these two pair up to make a book because they always look so nice; for instance the materials this shape series is published in is really distinctive because the covers are extremely thick cardboard (with no jacket) and the inside pages are regular paper, all cut with a rounded edge instead of sharp corners. The illustrations are simple but engaging, and I’ve seen it described as ‘minimalist’ by other reviewers.

It’s difficult to judge how interesting this book is for my kids. Although this duo has won many awards for their work, I think this is one of those books that adults feel good about buying, but the kids don’t necessarily flock to it like we wish they would. The story is simple, it’s about circle going into the dark to find triangle, but getting scared and fleeing when she realizes there is another unknown shape in the dark that she can’t see. Later, she calmly reflects on what the other shape may have looked like. So the open-endedness of this book is what appeals to adults, but the opportunity for imagination lay flat when I tried it out with my daughter. The last line asks the child to think of what the other shape might be, and my daughter looked at me with an expression that seemed more ‘who cares?’ rather than ‘let’s dream up a new and fantastical shape together’. Anyway, if someone reading this can tell me what all the fuss is about when it comes to these shape books I would be grateful.

Georgia’s Terrific, Colorific Experiment by Zoe Persico is a riot of girly colours, mainly magenta and lavender with some orange and pale blue thrown in for good measure. The rich jewel tones cover each and every page, mostly floating up from Georgia’s many science experiments that involve test tubes and beakers filled with every colour of the rainbow. It’s about a young girl named Georgia who lives in a family of artists but longs to be a famous scientist, so she decides she wants to conduct a groundbreaking experiment. Unfortunately her family insists on giving her artistic advice that she feels gets in the way of ‘scientific thought’ so she stomps into the forest to escape them. Once there, she realizes that playing with colour is the perfect way to ignite her creativity, which is necessary to come up with an effective experiment. So instead of having to choose between science and art or science and her family, she realizes they all work best together, in harmony.

Sometimes a picture book will appeal to my 4-year-old simply because it features her favourite colours on every single page, and those colours are pink and purple. The revelation of how little it takes to please a child will come as a surprise to approximately…no one! I know the message of Georgia’s Terrific, Colorific Experiment is completely over her head, but she still loves it so that’s good enough for this Mom.

The message itself, that art is equally important as science, is an interesting one. Our Western society is still debating this; school art programs are always the first to be cut even though numerous studies have shown how critical music, art and drama is to a child’s education. Although I know how important it is to learn math and science in school, I can’t help but point out that finding enjoyment in the arts is something that sticks with a person through their whole life. I can’t remember how to do long division for the life of me (why would I?) but being able to read a piece of sheet music still stands me in good stead, even to this day. My engineer husband will most likely disagree, but like a good colour wheel, our differences are what makes us complementary (wink wink).

So we’ve got three new books that feature animals, shapes and colours; the preschooler trifecta! What kind of picture books do your children gravitate to? Or if you don’t have kids, what was your favourite kind of picture book growing up? Let me know in the comments!!!