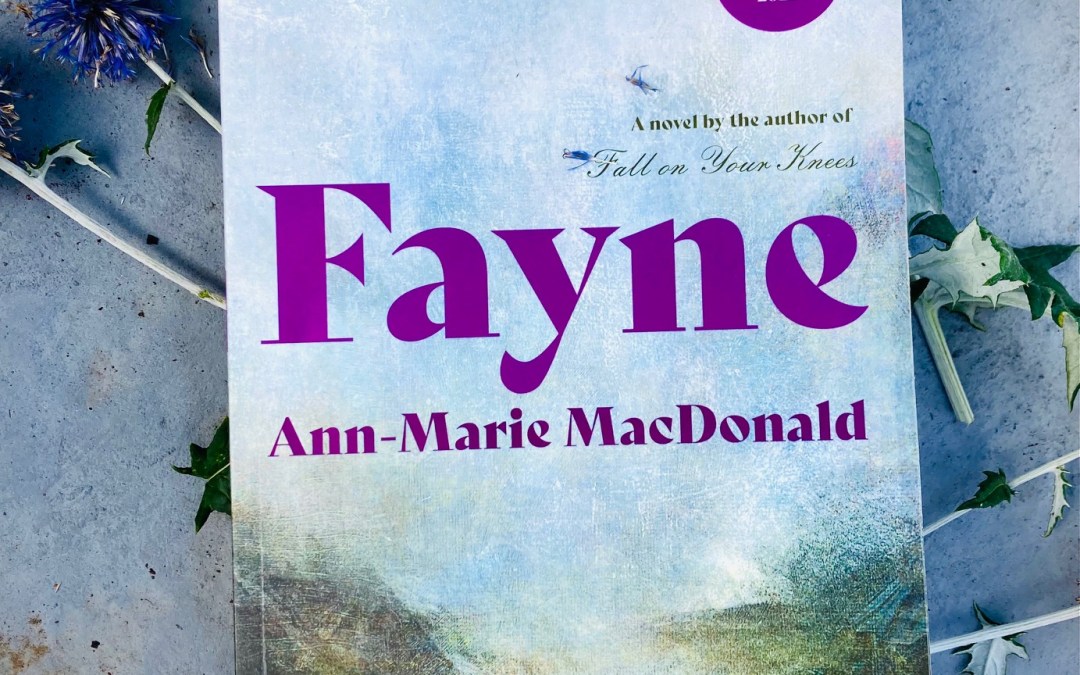 Big books come out in the Fall – it’s book awards season and it’s when all the serious award contenders are released, especially those that should sell well for holiday shopping season a few months later. In the case of Fayne by Ann-Marie MacDonald, this book is not only a big deal for Canadian publishing (she’s the beloved author of Fall On Your Knees, a true Canadian classic), but it’s a physically big book – 736 pages to be exact. It’s no secret I prefer a shorter read, but I really loved Fall On your Knees, and I was rewarded for this commitment with rich characters and some shocking twists. There’s no getting around it though, this is a SUPER long book, so prepare yourself.

We meet Charlotte in 1887 on the border of England and Scotland in a rambling mansion on a windswept moor. She is an incredibly intelligent young woman, verging on the age of 13 and utterly dedicated to her father Henry, another gifted but somewhat quieter person, obsessed with birds and devoted to his only child. Charlotte suffers from a mysterious ‘condition’ that is referred to, but only explained until about a third of the way through the book. Her health has given her father an excuse to keep her secluded in their home and property, as vast as it is. She rarely sees others until a male tutor is hired to continue her impressive education, but he doesn’t last long. The first-person perspective of Charlotte is interrupted by occasional letters from decades ago written by her mother, giving the reader a vague of idea of what transpired before Charlotte’s birth. Charlotte is shielded not only from the outside world, but the truth of her family and their many secrets. Woven throughout the book are mentions of magical influence, found not only in the moor and its vast array of flora, but the ancient knowledge of their staff as well.

If you’ve read my reviews before, you’ll know I don’t like an overly long book. Fayne did not to be 700 pages long, but here we are. I was resentful of its length before I picked it up, so I prepared myself for a slog but forced my interest any way, eager to find the magic in its pages that I recalled from her earlier book. It took approximately 100sih pages to get into, but once the plot began to unroll and introduce the family secrets, I was hooked. We jump back and forth through time quite a bit, which muddies the timelines that later become so critical to the lies the family clings to, but it also added to the suspense that builds about halfway through the book.

MacDonald is an advocate and member of the LGTBQ community, and this is obvious in the telling of the story and the challenges Charlotte faces. I can’t explain too much without giving away the whole book, but suffice it to say, Charlotte’s struggles are ones that can be related to, even 150 years later. Gender is an important theme in this book, and like many works of historical fiction, it’s easy to demonstrate the unfair ways women were treated back then, but in this particular story, some women are even more dangerous than their male counterparts. I love how MacDonald continues to surprise us – not only with the plot twists, but with the cruelty of some humans that were once depicted as ‘good’. In the case of Charlotte’s father, his passiveness is one of the most dangerous aspects of his personality.

I’ve got an idea of how this book could have been cut down in size. There’s this subtle thread of magical realism that runs throughout. It pokes through the narrative here and there, and then rears its full head at the very end. I found this wholly unnecessary, and not really fitting the overall tone of the book. It’s not annoying, but it certainly wasn’t needed. MacDonald is such a powerful writer because of her characters, and I would have loved that focus to remain on them, rather than stray towards this supernatural element (which admittedly, fit the culture and timing, but still seemed superfluous.) This is a quibble from someone who doesn’t like a long book, and isn’t a reason to avoid it – I still highly recommend reading this novel, just set aside some time to do it.