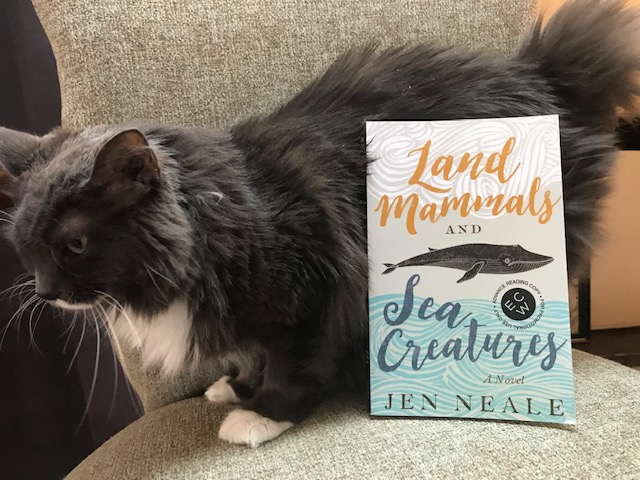 I came across Land Mammals and Sea Creatures by Jen Neale when I received a copy of it in a ‘loot bag’ from a bookish event here in Calgary last year (yes, they exist, although these super fun events are few and far between!). It sat on my shelf until recently, but I had been meaning to pick it up for a few months now after it appeared on the shortlist for the Rogers Writers Trust Fiction Prize. Sadly, it didn’t win, but I’m hoping it did enjoy a boost in sales because this novel surely deserves the attention.

The story begins with a somewhat momentous event-a large blue whale beaches itself, then dies. Thus begins a torrent of animal suicides; birds flying into buildings, racoons throwing themselves under cars, even a moose running straight into a glass storefront! While this is happening in the background, the reader is focused on Julie Bird and her ailing father Marty Bird. He fought in the Gulf War and has suffered debilitating PTSD ever since, and Julie has left her busy life behind to move back in with her father in an attempt to help. Strangely, a woman named JLL, who is also a Jerry Lee Lewis impersonator has also swept into this small town, performing at Marty’s fish and chips shop to an incredibly rabid and increasingly large group of fans. While we follow Julie, Marty and JLL during this strange time in their lives, we also experience Marty’s flashbacks to his younger years before Julie was born, which gradually explain JLL’s appearance in the present.

Although this novel verges on the realm of magic realism when considering the strange animal behaviour, it continually pulls us back to a strong literary atmosphere that centers on the complicated relationship between father and adult daughter. JLL comes to Port Braid with some shocking insight about Marty, and Julie struggles with this newfound knowledge, resistant to giving in to what Marty truly wants. Their treatment of each other is at times unbelievable, but this is true of most families, so I think their interactions are realistic and will ring true for many readers.

One thing that I found myself nodding my head to was Julie’s observation that she tends to revert to her younger self, completing only one chore a day while home, yet being an extremely busy and efficient person otherwise. I’m the exact same way-when I go home to visit my Dad time slows down, I find myself sitting (or more likely lying down) on the same couch I wasted hours of my teenage years on. Why does this happen? Can anyone else relate to this?

While the family interactions are jarring, the writing is anything but. I love this one line that describes Julie’s thoughts while observing the ill-fated blue whale swim beneath the boat she’s on:

“Julie had the urge to jump over the railing and ride the whale to the bottom of the sea, swinging a seaweed cowboy hat over her head” (p. 7 of ARC).

Good writing, introspective yet engaging plot and a magical tale that’s firmly rooted in reality; no wonder this book was shortlisted for a major award last year!