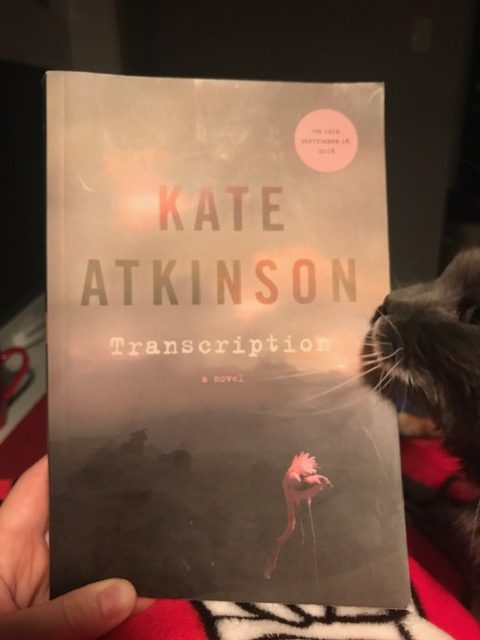 When Transcription by Kate Atkinson came out in September 2018, there was lots of buzz around it. Many said this was Atkinson’s best book to date, and it has been on a bunch of ‘best of 2018’ lists. Despite this hoopla (and I use the word ‘despite’ on purpose, because book buzz tends to be my worst enemy) I really enjoyed reading it, and it only took me a few days to work my way through it.

The shining star of this book is most definitely our protagonist Juliet Armstrong. We see the world through her eyes, at three different points in her life. The book opens when she’s old and near death, so we know she survives whatever adventure awaits us, and then we skip back to 1950 where she’s living a comfortable if somewhat monotonous life working at the BBC (British Broadcasting Corporation) in London. We then go even further back to 1940 when Juliet lands at job at the secret service during WWII as she becomes a member of a team dedicated to rooting out German sympathizers-she transcribes the secret conversations they listen in on. From then on we switch back and forth between 1950 and 1940, but both decades hold equally enticing and mysterious obstacles for Juliet.

What I love best about her is not the exciting situations she finds herself in, but her inner most thoughts that only us readers are privy to. She has a biting, sarcastic sense of humour that makes every scene so enjoyable to read. One of my favourite lines:

“Why was it that the females of the species were always the ones left to tidy up, she wondered? I expect Jesus came out of the tomb, Juliet thought, and said to his mother, ‘Can you tidy it up a bit back there?'” (p. 285 of the ARC)

The book is FULL of these little gems which come together to create a vivid and rich inner life for Juliet that equally measure up to her external life of espionage during WWII. And she certainly is living an exciting life, despite her grumblings about it all. The real-life spy book I read a few months ago really resonated with me, so I can see why this has become a bit of a trend lately. At one point, Juliet has an internal debate about whether a person she knows as a double agent is actually a triple agent fooling MI5 into thinking he’s a double agent for them, when really he may be feeding information to the Germans that MI5 doesn’t even know about. It gets a little confusing if you think about it too hard, but what makes this all the more interesting is that you know that there were most certainly people who were in these exact positions during the world wars, as well as the cold war. Fiction rooted in fact always ups the thrill factor for us bookworms.

Juliet’s life in 1950 revolves around her job at the BBC writing scripts for various radio shows. For many, this would seem like a boring second act that follows such a risky job during the war, but in Atkinson (and Juliet’s) hands, these parts are anything but. Juliet’s snarky inner dialogue is the perfect antidote to the humdrum life at the BBC as she points out the annoying quirks of her coworkers, and anyone who’s ever worked a boring dayjob will be able to relate to this. Of course, Juliet’s shady past is never far behind her, so her earlier career mired in deceit does come back to haunt her, which amps up the suspense again towards the end of the novel. There’s lots to keep you riveted to the page, from the beginning to the end, so I highly recommend Transcription.