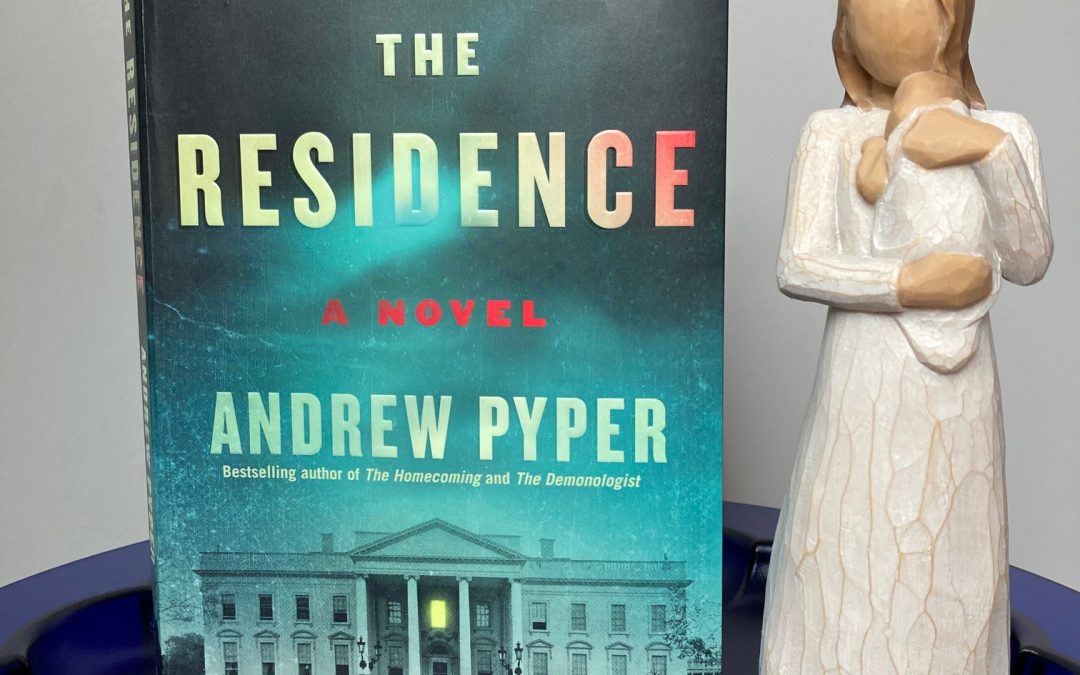 I’m no stranger to the spookiness of Andrew Pyper’s books so I knew his latest, The Residence, would be scary. It was indeed terrifying, and just looking at the cover of it reminds me of all the chilling scenes that were so vividly described it felt like I was watching it on a movie screen. And for the record, I have no doubt this book WILL be made into a movie, but I won’t be watching it because it will give me nightmares. It was the perfect book to kick off my spooky Fall reading, and for those looking for a good scare and a little bit of metaphor (something terrifying is inhabiting the White House wink wink) you will most definitely enjoy this one too.

Franklin Pierce is elected President of the United States in 1853. Before he and his wife Jane move into the White House, their only remaining child Bennie dies in a train crash that spares everyone but him. No strangers to heartache, they lost their other son a few years earlier, but Bennie’s death truly crushes them both as they struggle to adjust to their new life in Washington. Delirious with grief, Jane calls the Fox sisters to the White House in an attempt to communicate with Bennie in the afterlife, but instead, something else rises and begins to terrorize and haunt the mansion. Simmering underneath the ghost story is another plot line focused on the increasing push towards the abolition of slavery at that time. The scary figures presented to Franklin also come in the form of slaves who died building the White House, and the bodies of those who will die in the American civil war a few years later.

I’ve been anticipating this book for awhile, so I’m delighted to say it lived up to my expectations. As I hinted at in the introduction, Pyper writes in a very cinematic style, so I can easily play out all the scenes in my head which makes the experience of reading the book so immersive. It also helps that this book is about a dead child dressed in old-timey clothes, which really, is much scarier than a dead adult. You don’t have to be a parent to find a child’s death extra horrifying, and Pyper plays on this fear and dread to build the suspense even further in this novel. And for those sensitive readers, I want to assure you that the children’s death scenes are not dwelled upon or insensitive, so you can definitely stomach this even if you have kids of your own. At most, parents will relate even more to the protagonists, but the horror of the plot line will distract you from being overwhelmed with feelings of sympathy so you can still ‘enjoy’ reading it.

There seems to be a proliferation about books describing something evil in the White House, but unlike the current non-fiction titles I’m referring to, this book is a work of historical fiction based on a true story. According to the historical note at the end of the book, Jane did in fact hold spiritual readings in the White House, and there are rumours that persist to this day that the White House is haunted-how could it not be? If those walls could talk…

Pyper explores the different pressures put on the President, and the strange effect the White House itself can have on its residents. Towards the beginning of the novel Jane reflects on the changing expectations of them as a couple: “But here it was different. In this house, there was space that suggested one could be released from what they normally were” (p. 57). Later Franklin suggests the house has changed him in many ways, not just because it’s haunted: “He wasn’t Franklin Pierce anymore, a husband, a suffering father of lost children. Here he was president. Greater than a man, though one not permitted to be human” (p. 228). I could insert so many sarcastic, negative remarks about what we’re currently observing, but instead of stating the obvious, I’ll end this review with a question; what does holding such an esteemed spot in our society do to a person’s psyche? The Residence plays upon these double meanings beautifully which both piqued my interest and kept me sleeping with the lights on.