Book Review: Once More With Feeling by Meira Cook 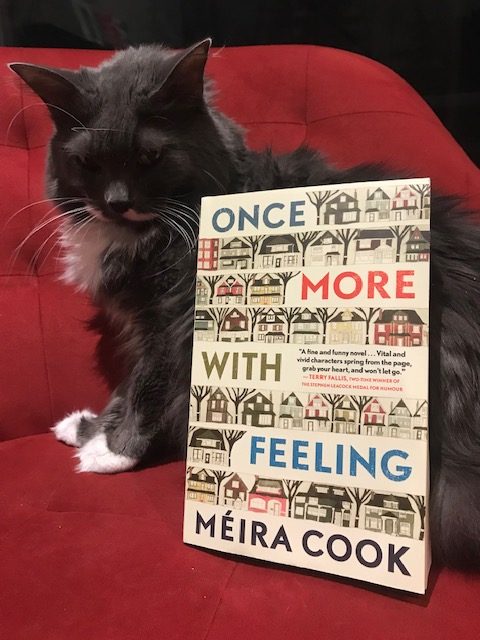 When I comment on other people’s book blogs, I frequently find myself saying similar things; in particular, I frequently admit that I love a good book that deals with nothing at all (like the literary version of Seinfeld). People’s mundane lives, the things that happen to all of us fascinate me, so I really expected to like Meira Cook’s novel Once More With Feeling. Unfortunately, this book just didn’t hit the mark for me.

This book reads like a collection of short stories, as each lengthy chapter is written from a different character’s perspective. We begin with Max, who has flown over his family’s 17-year-old World Vision ‘adopted’ child Pat from Africa to meet his wife as a surprise birthday gift. Moral issues with treating a person as a gift aside, this is a pretty unrealistic thing to start the book off with, but I’ll let that go. Unfortunately, Max and Pat get into a car accident and perish before they reach home and even more unfortunately, Max’s fly on his pants was broken. When their bodies are discovered in this comprising position, people assume the worst, and Max’s reputation is tarnished forever, especially in his family’s eyes. From then on we hear the perspective of each remaining family member, as well as other, unconnected members of their small community, many stories in which Max’s family barely registers.

Even summarizing this book intrigues me, because I think it’s a wonderfully sad premise. However, Cook just wasn’t able to follow through on connecting these stories to each other, and to the reader. What this book suffers from, at its heart, is unevenness. Some chapters I really enjoyed and connected to, while others lay flat, or at worst, come across as totally unnecessary. I think Cook was too ambitious with attempting to write narratives from so many different voices; teenage girls, older men, a young man suffering from various forms of mental illness. The scope is just too large and unfocused in this one.

Reading other reviews of this book only confirms my belief about is; it’s in need of a more substantive edit, and even though other reviewers were more positive than I’m being here, they all admit this is difficult to get through. I rarely DNF (do not finish) a book however, and I’m glad I kept going until the end on this one because I was rewarded with some closure in the last two chapters, and I closed the book feeling a bit lighter despite the tragedy(ies) I described above. In addition to the hopeful ending, I was also pleased with a few specific characters, some were extremely funny, especially the teenagers, and especially when said teenagers were describing seniors:

“Mrs. Silverstein was asking a bunch of girls if they were vegetarians, she certainly hoped not but it seemed to be the fashion these days. For instance, her own daughter, her Leah, had become one recently, and she was still a vegetarian even after Mrs Silverstein pointed out that if God didn’t want people to eat animals he wouldn’t have made them out of food”(p. 153)

Does this not sound like every old person you’ve ever talked to? Cook has clearly nailed this character, and she wrote every person in a very authentic way, in fact it’s impressive how realistic she was able to write each diverse viewpoint…but still, why bombard the reader with all this?

I will never write a book, I have no intention of doing so, so I read and critique writing with the reader’s experience first and foremost in my mind. Perhaps this makes me a harsher critic? I expect the author to write the book for us, the people on the receiving end. What do you think? Am I being too black and white on this subject? Let me know in the comments.