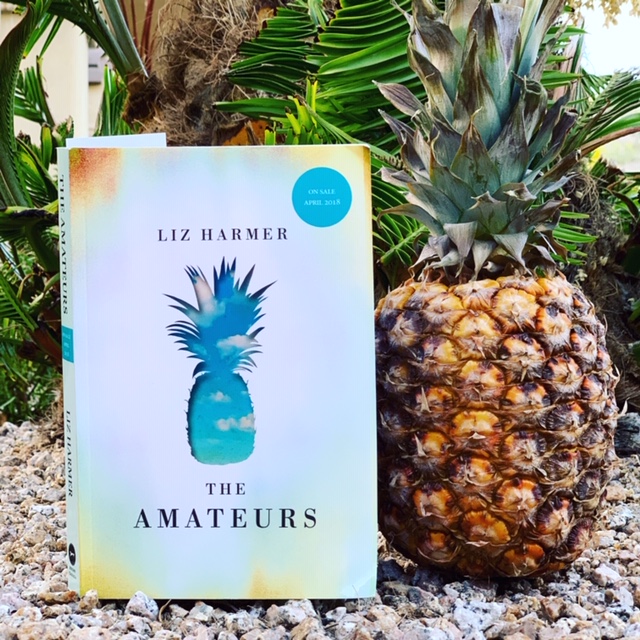 The Amateurs by Liz Harmer is hard to slot into one category;  it’s literary, philosophical, dystopian and science fiction, all within 300-ish pages. Even the publishers had to use other books like The Leftovers by Tom Perotta, The Year of the Flood by Margaret Atwood, and The Circle by Dave Eggers to describe what this book is similar to. Did it succeed in keeping my interest, even though it was all over the place in space, time and location? To be honest, I’m still pondering that, but the fact that I’m still thinking about the book even though I finished it a while ago is a good thing.

Marie is our protagonist, and she lives in a world that has been mostly emptied of humans, as far as she knows. A few years ago, a google-like company called PINA (with a pineapple logo) invented ‘ports’ which claimed to transport people to any time or location they desired, simply by walking through the port and thinking of where they wanted to go. The problem is, no one came back through these ports, so all human infrastructure is crumbling with not enough people to tend to it. Marie is living in a town with about 30 other people, and for those who are from Ontario Canada, you will recognize this city as Hamilton. For those who aren’t aware, this city gets very cold in the winter (as most Canadian cities do) so the remaining inhabitants are trying to decide whether they head south to a climate that’s easier to grow food in. They’re hesitant to leave because they a) aren’t sure what to expect when they leave their familiar confines and b) still hold out hope their loved ones may return through the local ports they left in.

There’s two other narratives to this book, one being a short interlude in which we follow a somewhat minor character through the port to discover what he finds on the other side (and obviously I’m not going to tell you anymore about that because it will ruin the surprise!). The second is a section that focuses on the remaining employees of PINA and what it’s like to live in the PINA compound now that most of the employees have gone through the ports themselves. This is when we peripherally meet Albrecht Doors, the mad genius who ‘discovered’ the ports, who very tellingly, has not entered one himself (hello red flag!). We also learn that the ports have the ability to coerce people, which is when we explore the idea of them being a type of highly sophisticated artificial intelligence. One PINA employee in particular breaks free of the cult-like environment and heads up north to his hometown, so readers get a glimpse into the life of the remaining population elsewhere.

I don’t think I’m alone when I say dystopian novels are fascinating. My favourite part is learning about the steps that society follows when things begin to fall apart and the day-to-day conditions people are left with. These types of books act as a warning and additional fodder for the already anxious among us. Despite the urgent nature of the plot, The Amateurs slows us right now, taking the time to sit in people’s heads and explore the nature of desire and how controlling it can be. PINA is so closely modelled after Google in this book that it doesn’t take a huge leap of the imagination to see how our own world could fall into the same kind of disarray. In many ways PINA’s power was positive, for instance it released a product called BioBark which converted carbon dioxide to energy, but there is always a darker side to progress and this all encompassing corporation eventually entered that realm.

The only thing I didn’t like about this book was all the philosophizing, I wished the plot had moved a bit quicker in that sense. But, I also found the premise unique and exciting, which propelled me through the pages at a decent pace. This book isn’t for everyone, but it will most certainly appeal to those looking for an adventure that takes place in a closely-related reality to our own.