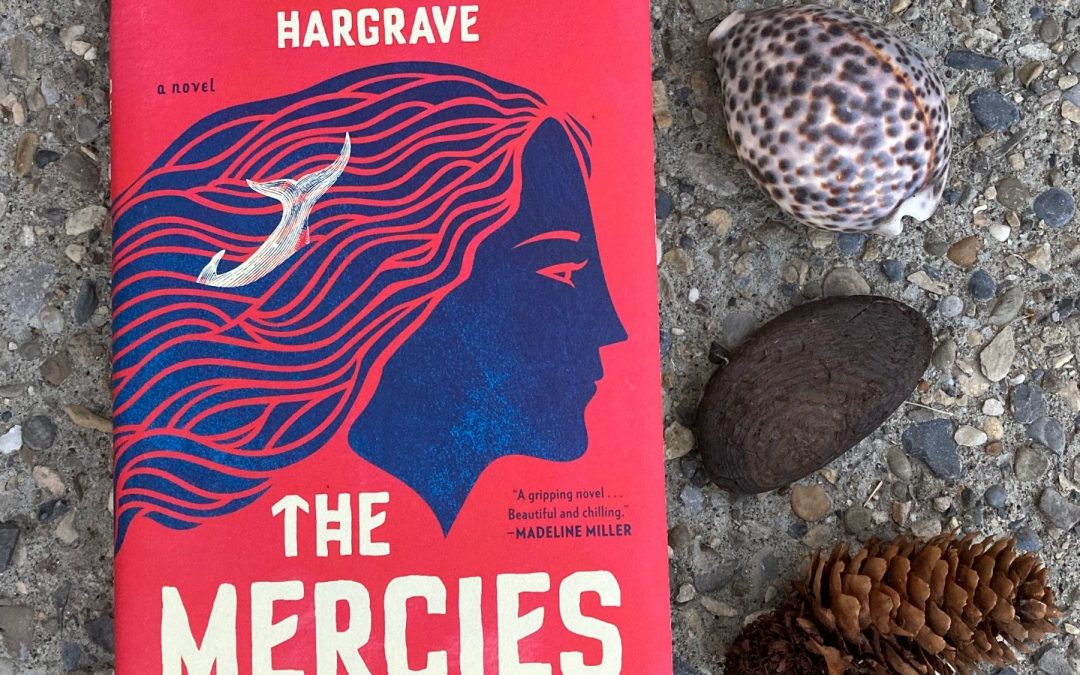 I don’t read a lot of historical fiction, although I do like to dabble every once in awhile, and The Mercies by Kiran Millwood Hargrave caught my eye because it deals with witches, at least, the idea of them. It’s also based on a true story, which again, appeals to me, because I like the idea of learning something about the past while I enjoy a work of fiction that’s been crafted to entertain.

This novel begins on Christmas Eve 1617, in the northern islands of Norway as a violent storm descends upon a tiny fishing village, killing all 40 men, leaving only women and a few young boys to fend for themselves for the rest of the winter. Three years later the kingdom sends a menacing figure to help spread the word of God, and push back against the pagan traditions practiced in secret. In a situation all too familiar to our modern society, the indigenous people, The Sami, are treated with disdain and suspicion by the Christians, and their religious focus on nature is deemed dangerous. These suspicions quickly morph into hysteria, building into the 1621 Vardo Witch Trials.

We view this specific time period through the eyes of two different women. First is Maren, a villager who loses her Father, her fiancee, and her brother to the storm. But, as women in that time and place are expected to, she carries on, struggling to secure the scarce resources available while braving her way through the unforgiving seasons, focused on taking care of her depressed mother, sister-in-law and nephew. There is little comfort and joy in Maren’s life, and reading about her daily struggles is a welcome reminder of how lucky we are, even during a world-wide pandemic.

Ursa lives a sheltered life at home with her sick younger sister. They are taken care of by one housekeeper who stays with them in their grand house, now boarded up to help save money while Ursa’ Father struggles to keep his business afloat. As is the custom, Ursa is married off to a Scottish man Absalom Cornet, who is the commissioner sent to Vardo to help root out Satan (insert eye roll here). Together they set sail for Vardo, and over the course of a brutally long voyage Ursa miscarries a child, conceived through the almost daily raping she endures at the hands of her new husband. Upon their arrival at Vardo, Ursa and Maren strike up a fast friendship, both desperate for companionship, especially as tensions increase and neighbors begin to turn on one another.

The writing put me into a trance, and although there was nothing mystical about the actions of these women, there is an other-worldly thread that runs through it, depicted in the dreams and visions that Maren has about a particular whale who is spotted during the storm. The visceral descriptions are nagging reminders of how tough their life back then was, yet their reliance on weather, something they have no control over, is what gives this book a magical feeling. The discomfort they endured on a daily basis made me cringe, but then a passage describing the beautiful view of a castle from a distance seemed to erase that earlier distress, lulling me into a rhythm that pushed me through the book quickly, despite its 338 pages. The Mercies is easy to read even though its subject matter is painful.

The fact that the author chose perspectives of women not accused of witchcraft, but friends of those who were, is a unique choice. Maren and Ursa force themselves to stand witness as a friend is burned at the stake, and this act of witnessing seems almost worse than the poor women being burned alive. The smell alone is a painful reminder of what just occurred, especially as they are 100% certain their friend was innocent. Again, the author’s focus on these visceral moments is haunting, but made the impact of her story so much stronger.

I know I’m not the only one fascinated by the witch trials from the past. As many depictions of them have taught us, the trials themselves were based on conjecture, suspicion, and cruel intentions. In many cases, the women tried were typically scapegoats for unfortunate events that people didn’t have our modern scientific explanations for. This major storm in 1617 is the perfect example of the fear of the unknown. But as many feminists would argue, the past fear of witchcraft is rooted in men’s suspicion, a product of their desperate clinging to power, not a fear of the unknown at all. The Mercies offers a distinctly feminist lens to this time in history, one that we should all continue to learn from.