Book Review: Bellini and the Sphinx by Tony Bellotto 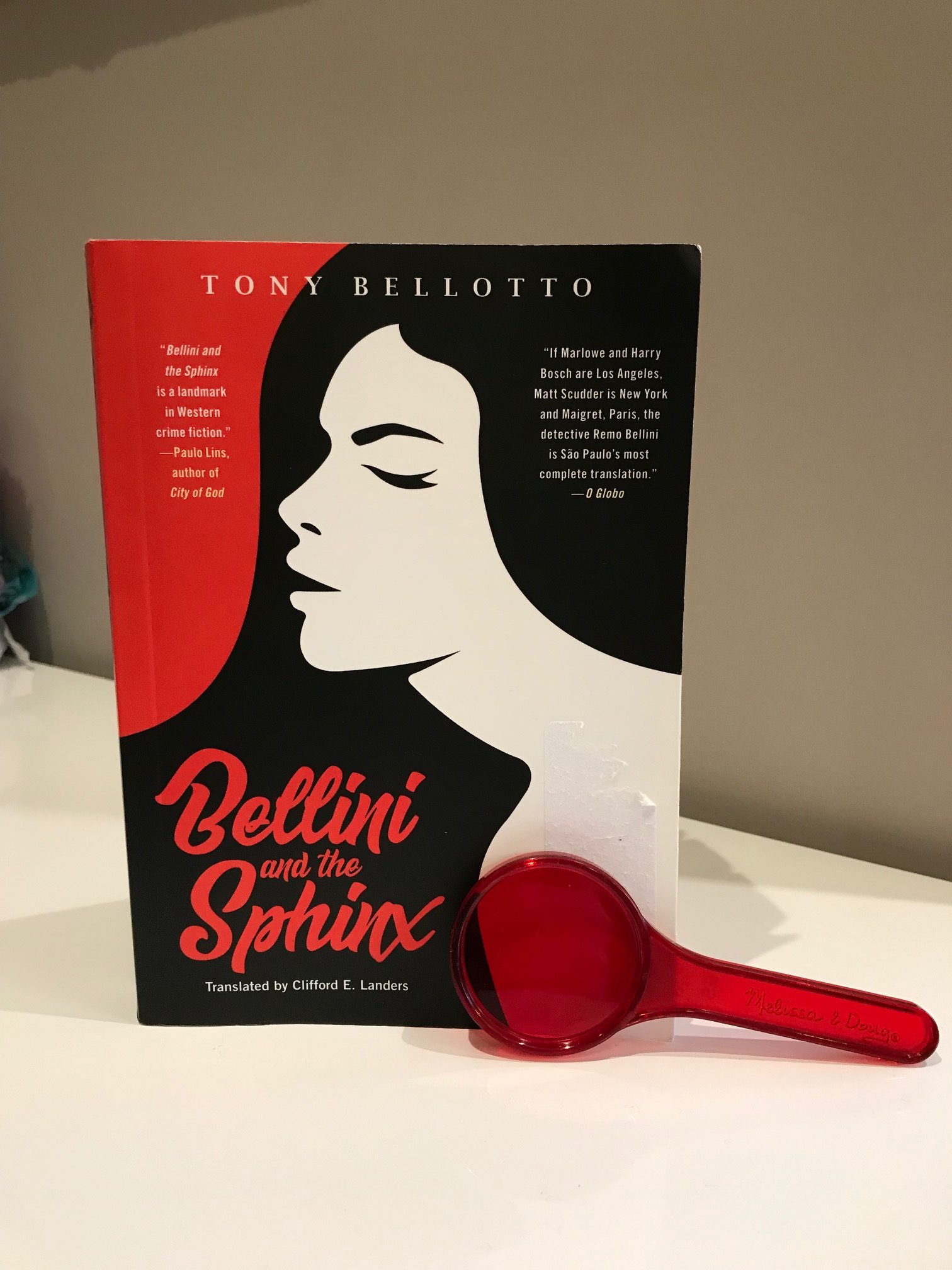 Are you a fan of ‘noir fiction’ ? Do you even know what ‘noir’ means? There are various definitions for it, but I found this wikipedia listing pretty thorough, and the first sentence does enough for my purposes here:

“In its modern form, noir has come to denote a marked darkness in theme and subject matter, generally featuring a disturbing mixture of sex and violence.[1] ” (John Hopkins).

Bellini and the Sphinx caught my eye in a publisher’s catalog because it comes from Brazil, and it’s written by the well-regarded artist Tony Bellotto who seems to have a multitude of talents, writing being just one of them. This, the first in the Bellini mystery series, is translated from the Brazilian Portuguese by Clifford E. Landers, and it is very much a ‘noir’ work of fiction. Remo Bellini has some demons in his past and they continue to haunt him as he leaves the profession of law and becomes a private detective. His most recent case has him frequenting a strip club looking for an exotic dancer who has gone missing, much to the upset of her ‘friend’, a renowned surgeon and family man. When the surgeon ends up dead and this dancer is still nowhere to be found, things take a wild turn for Bellini as he redirects his search towards a male sex worker instead. Violence, late-night meetings and lots of sex are commonly found in noir fiction, and this book is no different. The trailer below is from the movie based on the books.

So there’s a few things you need to know about books like this, and for female readers especially, there’s a certain amount of ‘suspension of irritation’ needed. Like suspension of disbelief, you will need to ‘suspend your irritation’ from the amount of references there are to women’s breasts, curves, bodies in general; but once you just accept that this is a part of the first-person narration, it’s much easier to just enjoy the story for what it is: a simple whodunnit mystery!

Although Remo is obsessed with women’s bodies, this book is far from misogynistic, in fact, Remo’s boss is a woman, and she’s a tough, intelligent and mysterious character. And although Remo seems determined to focus on how women look underneath their clothes, the author realizes that the reader is interested in getting this mystery solved, so quite a few strong and independent female characters are introduced to push the story along to a conclusion. And for those who are interested, this isn’t a a ‘fair play’ mystery that drops clues to the solution; the climax and subsequent confession is surprising, and the lead-up to it isn’t obvious either. Some mystery-lovers will appreciate this, while others will hate it. My only other quibble is the translation itself; I am by no means an expert, but I’m reading more translations these days so I am forming stronger opinions on them, and some of the phrasing seemed a bit awkward at times. Nothing too jarring, but I would stop reading for a second or two to consider what I just read because it seemed strangely worded or out of context for a character.

Because this is the first in the series, Bellini’s problems (which are numerous) are only hinted at, his background troubling and ample enough to provide content for an entire mystery series with him as the protagonist. As I mentioned above, my favourite character in the book was Dora Loba, the owner of the private detective agency Remo works at; the dialogue and interactions between these two people are fantastic, and lent some much-needed lightness to the story. Both of these characters are well-drawn and thoughtful, so I do hope that these books continue to be translated for us English readers.