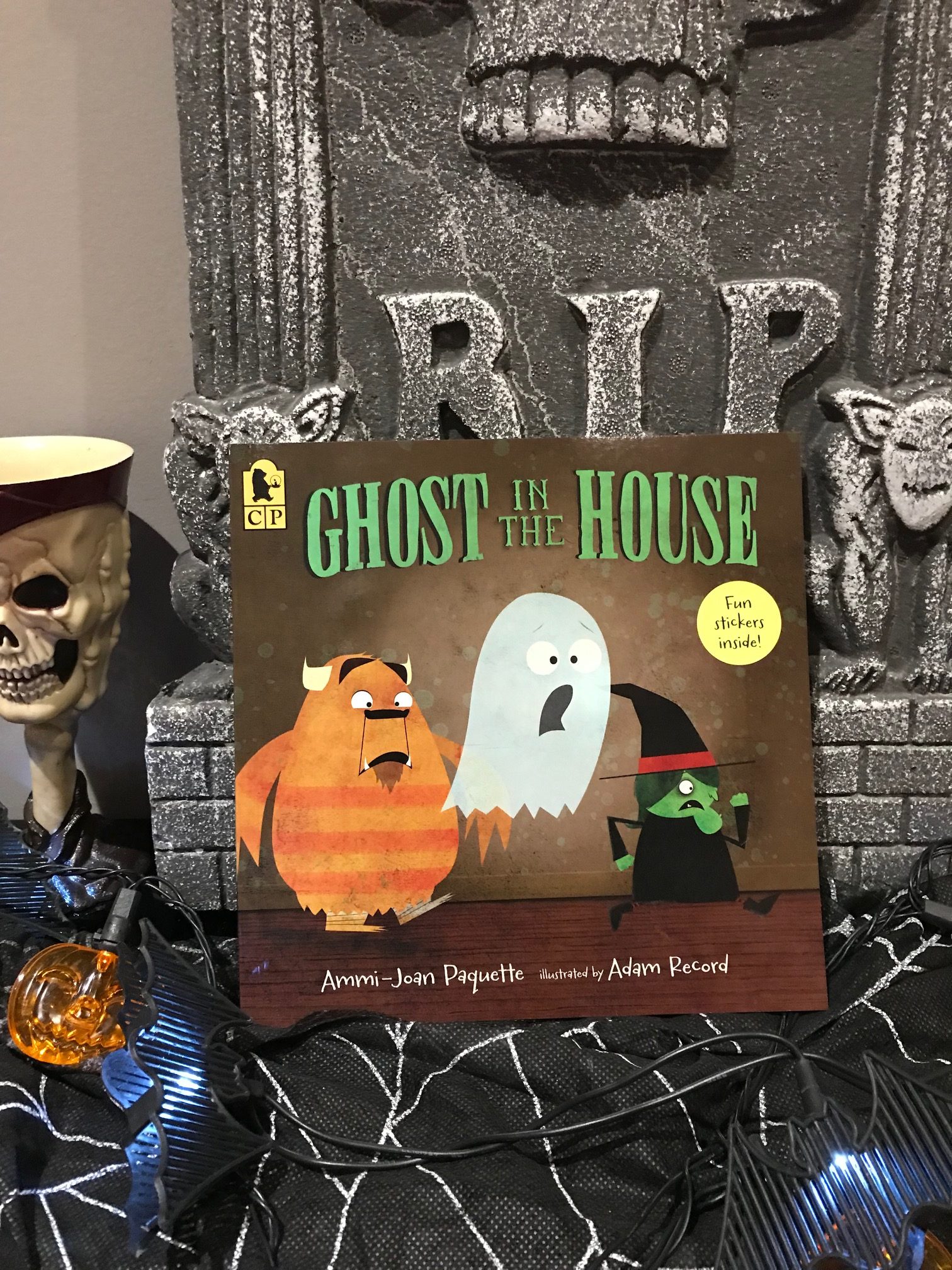 Holiday picture books are my absolute favourite way to get in the ‘mood’ for something. Even though we read them all year around, they seem to radiate an important aura as the relevant date approaches, getting both myself and my kids event more excited for what’s to come. I received two Halloween books in the mail this year, and one book that’s decidedly NOT for children, but probably one of the best bookish ‘treats’ I’ll get for awhile.

Ghost in the House by Ammi-Joan Paquette, illustrated by Adam Record is one of those cheap and cheerful books that I rely on as a reliable distraction for my kids. It’s no literary masterpiece, but I can guarantee that my daughter will enjoy it, one of the biggest reasons being the page of stickers that comes with it in the back. Is including stickers in a book sort of tricking kids into reading? Maybe, but I’m not a teacher, and as a parent only, I can guarantee that this works, so I fully support it. And it’s not all shallow; the writing is building upon a pyramid of counting, each page introducing a new Halloween character which then invites the reader to tally the amount of creatures now in the haunted house. It’s spooky in a light-hearted way because the creatures first appear as shadows, but we end with them all running away after the scariest character of all appears: a young boy! Plus, the text rhymes, which tends to alleviate any seriousness that may accumulate if things get too scary. The illustrations have a modern feel to them as they incorporate a wide range of textures; perfect for a haunted house story.

In contrast, Pick a Pumpkin by Patricia Toht, illustrated by Jarvis is a stunning hardcover picture book that forces kids to consider what leads up to the big night of trick-or-treating. This one doesn’t go for the cheap thrills that young’ins are typically attracted to (although it does have a holographic treatment on the cover which always adds the ‘wow’ factor) but it engages them in other ways, mainly through easily understood text and detailed illustrations. For some strange reason my daughter is really entranced by the fact that orange, green and white pumpkins are depicted, and now that she knows they exist, she won’t stop asking for a white pumpkin for our porch. Ain’t nobody have time or money for decorative gourds these days, but I’d rather hunt down a white pumpkin than an obscenely expensive and obscure costume, so I’ll count my blessings for now (she’s going as Elsa from Frozen, naturally).

The book begins in a pumpkin patch on a farm, which quite honestly is where I wish all Halloween books began, because it’s a nice reminder of the agricultural aspect of the holiday. From there the family goes home, sets up a carving station and debates how they want their pumpkin to look. They quickly decorate their front porch with some other spooky items and then head out trick-or-treating. Aside from the ongoing myth that people decorate their house/tree the evening of every holiday (who does this on Christmas Eve, or the night of Halloween? Talk about leaving things to the last minute…) this book is a fairly simple and easy-to-follow review of what’s going to happen, which is a realistic and scary-free way of introducing young ones to October 31st and its accompanying traditions.

Now for my most favorite book of the bunch, and most decidedly NOT for children, is F*ck, Now There Are Two of You by Adam Mansbach, illustrated by Owen Brozman. Many will be familiar with the first two books in this series; Go The F*ck to Sleep and You Have to F*cking Eat, and this one is in the same vein, written by and for weary parents everywhere. It voices and confirms the same fears all parents of two or more children have; what have we done? Why did we think one kid was hard? Who is going to pay for your college education? The book’s text rhymes, and each page is complete with a full-colour illustration depicting the chaos that is parenthood, so it’s entertaining on both levels.

I know many people complain about the fact that parents complain. Believe me, I get it, and I’m a parent! They say ‘why complain about something that you willingly chose?’ (in most cases) and I get it. For the childless, complaining about parenting seems silly. So I won’t recommend this book to people without kids; the humour won’t land as well (you’ll find it funny, but not AS funny as parents). I received the first two books in this series as baby shower gifts, and I highly recommend this-it’s a cheeky idea, and we don’t need anymore plastic crap floating around. And what do you get the parents of baby #2 who have everything anyway? And obviously this isn’t a Halloween-related item, but you can chuckle quietly along to this book while your rug rats are sorting through their candy haul: everyone wins.