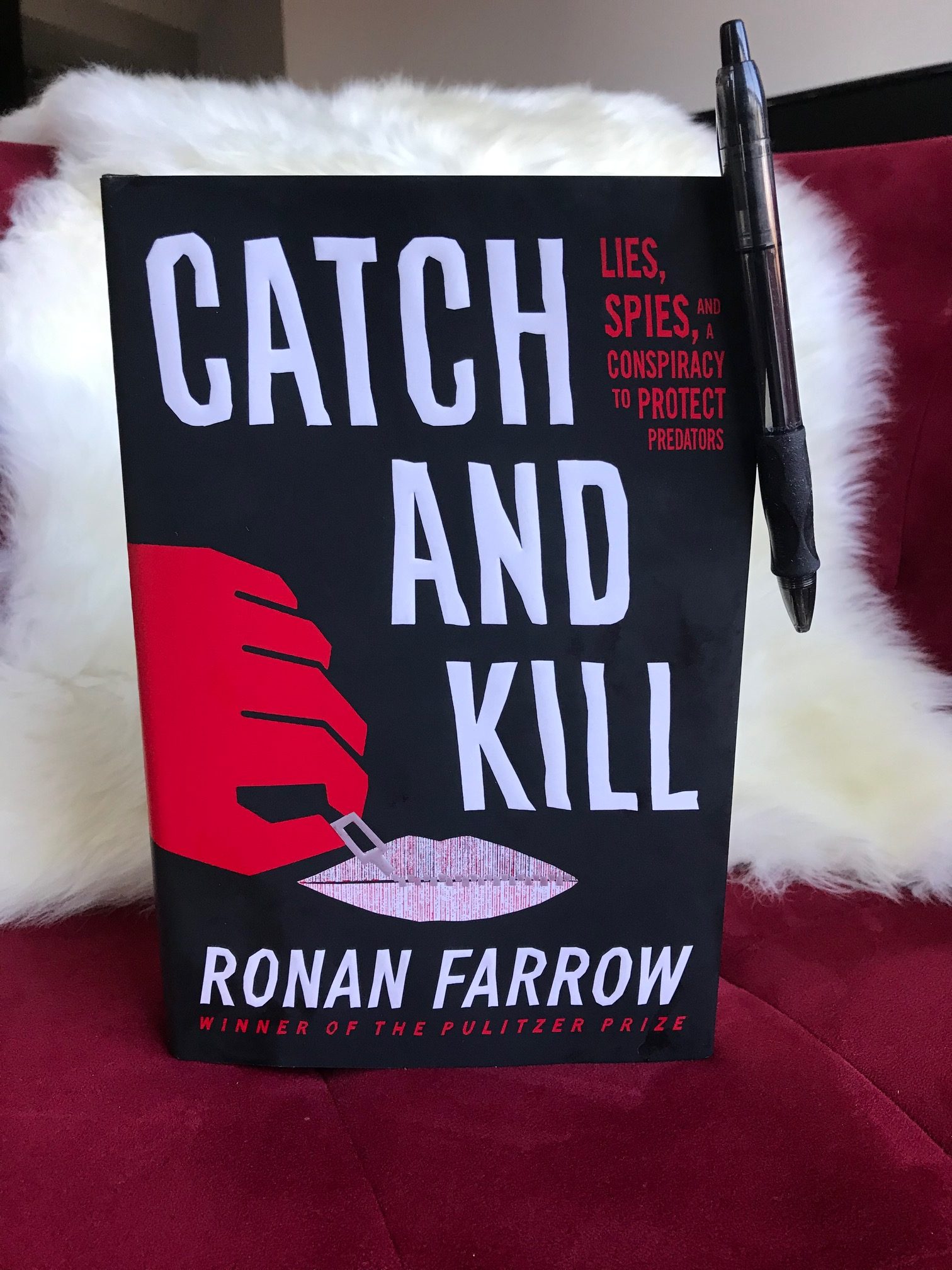 So, been following the news lately? Does #metoo ring a bell? If any of this is sounding familiar, you’ll want to read this book. Catch and Kill by Ronan Farrow was released in October, but has been on the top of everyone’s TBRs lately, especially now that the trial of Harvey Weinstein has begun. Despite what the cover suggests (to me, it looks like a work of fiction), this is a non-fiction, in-depth account of Farrow’s ultimately successful attempt at publishing the numerous and well-known accusations of sexual misconduct, harassment and abuse that Harvey Weinstein, and a few other famous men have committed. This is another popular version of true crime that’s sweeping bookstores these days, but instead of murder, we have a less-obvious but easier to cover-up crime: sexual assault.

Farrow was working at NBC news as a reporter when he got a whiff of a conspiracy; apparently Weinstein is a danger to women he finds attractive, but everyone aware of this is trying their best to ignore it, including the women who subjected his assaults. As Farrow digs deeper into the story, coming up with more and more women who are literally terrified to speak about this, his bosses at NBC also begin to get nervous, trying to put the brakes on his story, circulating different excuses in an effort to dissuade him from continuing. While he fights this exasperating in-house battle, Farrow also picks up on discrete clues that men within his own ranks, mentors of his own, may also be sexual predators too. Not surprisingly this is a depressing book to read as a woman, but not at all shocking, as statistics suggest that most women have experienced sexual harassment or assault at least once in their lives.

The first three-quarters of the book centers on Farrow’s ground-breaking investigation into Weinstein, while the last part of the book focuses on a Donald Trump’s accusers, Matt Lauer’s accusers, and briefly a few other men at NBC. But make no mistake, this book isn’t just about these specific men and the despicable ways they behave, it’s about the systems that protect them, and how evidence literally must pile up into an un-ignorable heap before other powerful people are forced to take action. What’s incredibly upsetting about this story is the length people will go to protect their jobs. No one felt comfortable speaking up against these men because they were simply worried about the negative impact on their careers. Sadly, the mental and physical health of these victims were apparently secondary to one’s climb up the corporate ladder. Yes there are suggestions that Weinstein had dangerous, illegal connections, but you never really get the sense that people feared for their physical well-being, it was simply easier for them to turn a blind eye and reap the rewards of being friends with such an influential person.

I’m not the only one who thinks this book is a must-read, my local Costco is carrying it, which is always a sign that something is selling well across the North America, and apparently it’s corresponding podcast is a ‘must-listen‘. Oh yah, Farrow also win the Pulitzer Prize for this reporting! And even though this is a serious book with life-altering confessions and accusations, Farrow has a biting sense of humour. Being somewhat of a celebrity himself he understands the absurdity of the entertainment business, but because he’s embedded in this world despite his embarrassment of it, his reflections come across as very authentic. One of my favourite lines:

“Deborah Turness, who preceded Oppeheim, was described in lightly sexist profiles as having “rock chick swagger,” which as far as I could tell just meant she sometimes chose to wear pants (p. 44). “

This book will appeal to those who like a good dose of gossip, because that’s essentially what this book is; a full-on investigation into gossip, why it never went anywhere, and why the ‘bad guys’ haven’t been punished yet. But Farrow is a respected and serious journalist, and his desire to do the right thing and give a voice to these women is admirable and so badly needed. I do hope this type of reporting opens the floodgates to all those untold stories out there, as my fellow female readers know that these accusations are just the tip of the iceberg.