Book Review: Close-up on Murder: A Murder, She Wrote Mystery

I’ve had this book on my shelf for awhile now, it was a gift from someone who knew I loved the show. I was saving it for a ‘special occasion’, meaning, when I knew I would need my spirits lifted, and reading something comforting like this would instantly make me feel better. So, I packed it in my hospital bag for my recent labour, because reading in a hospital is depressing, but I knew protagonist and amateur detective Jessica Fletcher would help me through it. I was not disappointed, this was another lovely read from Donald Bain who seems to capture the television show perfectly-it’s the next best thing to watching an episode of Murder She Wrote.

There are a ton of stories in this series, but I’ve only read a few so far as they are hard to come by in used book sales. I’m not 100% sure whether each book has a corresponding television episode either, so if anyone knows the answer to that, please let me know in the comments section below. 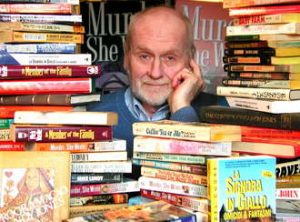 Sadly, Donald Bain passed away in 2017

Close-up on Murder centers on the Hollywood production of one of Jessica’s books, and to lend to the authenticity of the script, the movie is being shot right in Cabot Cove, Jessica’s hometown. The book that the script is written from was actually based on a real-life trial that also took place in Cabot Cove, so the plot of the movie involves real citizens of the sleepy little town. This of course means that there are people who may be unhappy with the fact that movie is being shot at all, which gives us the beginnings of a suspect list when the starlet of the film, Vera Stockdale is found murdered. In addition to the afore-mentioned motive, Vera is a downright villain, terrible to work with and be around, so there is no shortage of people that would prefer her gone. Mort Metzger is first on the case, but as always he appreciates Jessica’s help to solve these crimes, so together they go about questioning people on set, and in the town.

Always a fine examples of cozy mysteries, these books by Donald Bain (and in an adorable tongue-in-cheek fashion, also listing Jessica Fletcher as a co-author) are a true joy to read. Rabid mystery lovers may end up hating these books because they are simple, with not many twists to surprise or upend the reader. But, I find these books so comforting to read, and I love how they further develop the character of Jessica Fletcher because we are subject to her inner thoughts, which we obviously aren’t in the television show. This book is no different; it brings us a little deeper in to the world of Cabot Cove, but it’s immediately recognizable and authentic to anyone who watches the show. My only complaint about these books are the clichés-there are tons of them, and I sometimes found myself rolling my eyes, but only for a short time, because I was too eager to get to the next page.