Book Review: Talking to Strangers, a Memoir of my Escape from a Cult by Marianne Boucher 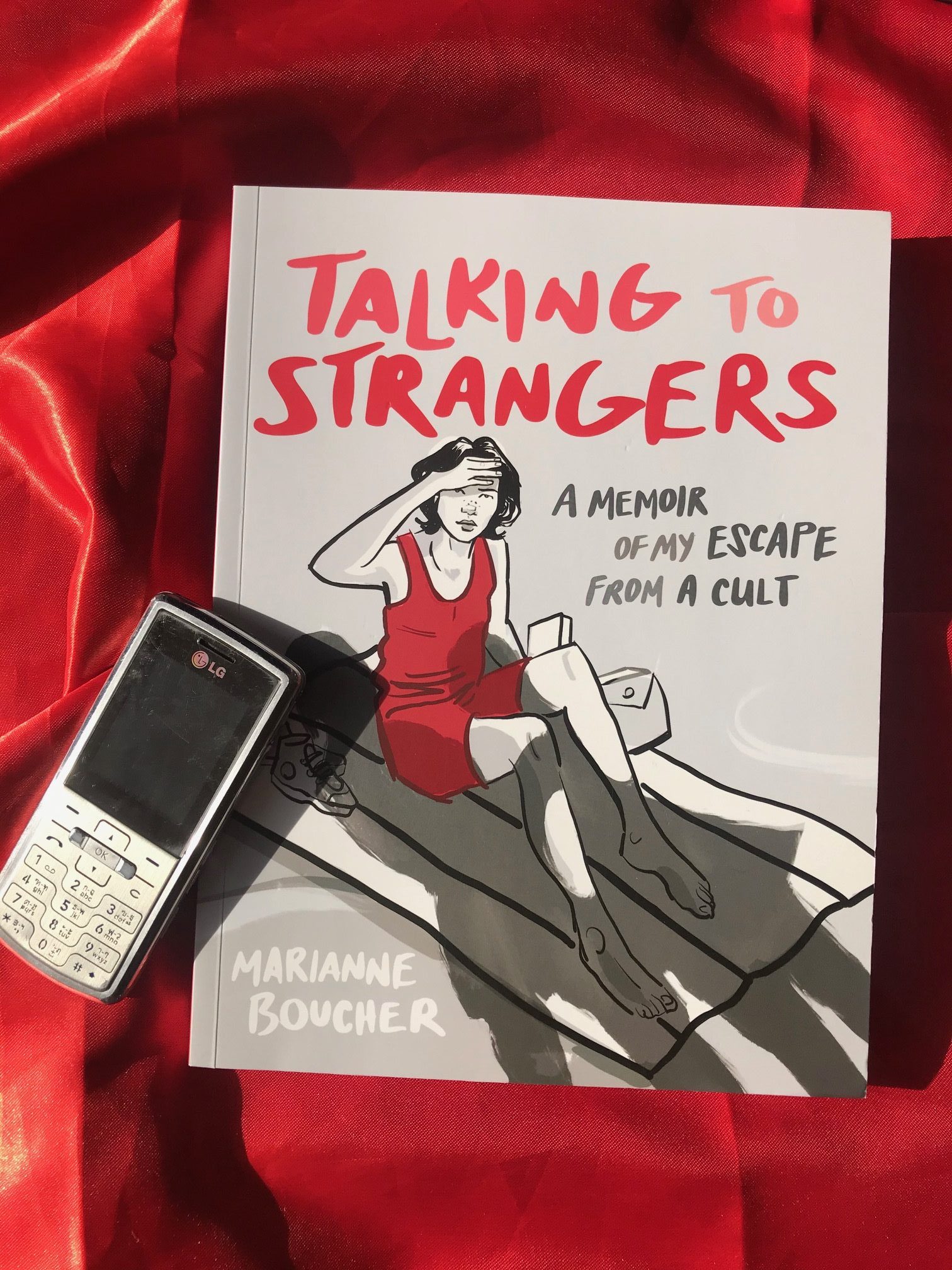 Have you read a graphic novel lately? Even though I don’t consider myself a graphic novel aficionado, and I’ll (probably) never step foot in a comic book store, I’ve developed a real appreciation and love of this growing genre. Canadian graphic novels in particular seem to be in a league of their own, the stories they tell are intelligent, absorbing, and varied. When people tell me they don’t read I (first, recoil in horror) and then suggest they pick up a graphic book-they are the gateway drug to other long form reads for many, but more importantly, a unique form of storytelling that deserves much more attention.

Talking to Strangers, a Memoir of my Escape From A Cult by Marianne Boucher is a must-read. First off, who doesn’t want to read about someone escaping a cult; this stuff is fascinating!!! Many memoirs about this phenomena exist, but because this particular story is told with pictures the seriousness of the situation is hard to ignore, and the burden placed on Boucher’s family members is palpable. As an 18-year-old, Boucher traveled to California in 1980 to audition for the Ice Capades, but before she even reached the tryouts, she was sucked into a religious cult under the guise of helping others. Her mother hires a ‘deprogrammer’ to help extract Marianne from the clutches of the influential and dangerous group, but the psychological damage caused by her brainwashing is difficult to overcome, following her back to Canada as she returns home to a ‘normal’ life.

The pictoral format of this book is the perfect vehicle for describing the conflicting emotions Boucher experiences. As a courtroom illustrator, her talent at depicting various emotional states through facial expressions is obvious, but even more impressive is the way she draws the metaphorical states of being as concrete circumstances. For instance, when the two people who initially lead her into the cult coerce her into another get-together, the accompanying illustration is of Marianne caught between two people pushing the walls into her body, trapping her. So even though there is very little text compared to a regular novel, I got an incredibly detailed sense of the character’s inner thoughts and feelings; this is the sign of a truly magnificent use of illustration and text together.

I haven’t read a lot of books on this subject, but I do find it fascinating and will certainly search for more. What surprised me most about Boucher’s experience was the emphasis the cult placed on her inner self, and the group’s insistence that becoming one of them was a way to truly understand oneself and succeed in life. It reminded me of a ‘training’ session I was sent to in my early twenties as part of the Landmark program (which many have called cultish), and I remember having a strange sense that something wasn’t right as I sat in the audience. My friend and I walked out escaped during a break, returning home to messages on our answering machines threatening us with failure and other vague consequences if we didn’t return. In the days afterwards, I suffered my first and only panic attack, and not until speaking with a medical doctor afterwards did I realize how lucky I was to have had the courage (and a friend) to leave with. I truly felt like I dodged a bullet there, but if my circumstances were different or if I had been alone, I may have chosen to stay and submit to whatever godawful nonsense they were spewing. That experience was just a sliver of what Boucher endured, but it made me understand and sympathize with her situation even more.

Even if you weren’t forced into some weird professional development situation like me, you should still pick up this book. It’s a quick read, but it’s enlightening in so many ways. Not only is a good and entertaining story, it’s a telling window into the power of coercion.