Book Review: The Golden Tresses of the Dead by Alan Bradley 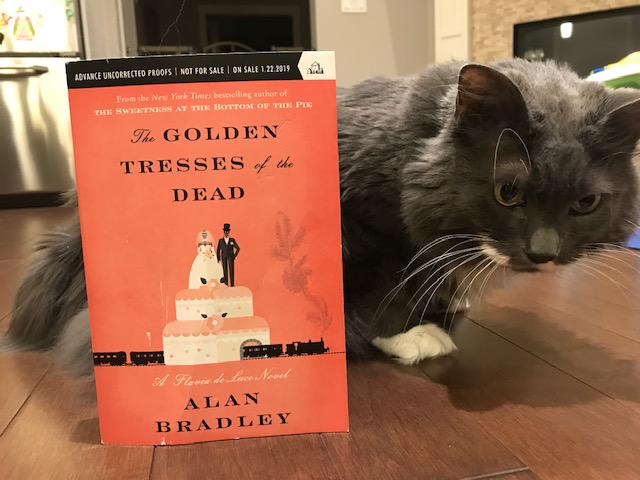 What’s that you say? Another Alan Bradley book? Why yes please! The Golden Tresses of the Dead by Alan Bradley is the tenth installment in the Flavia de Luce series, which begins after a short period of time has gone by since the last Flavia book, The Grave’s a Fine and Private Place. Released once a year, I look forward to reading these books immensely. I’ve recently learned that some people find the protagonist and budding detective Flavia annoying, but I couldn’t disagree more-she is THE reason I keep coming back to these stories.

This book opens with Flavia’s older sister Ophelia’s wedding. All goes well, until Ophelia discovers a dismembered finger shoved into her wedding cake. Flavia quickly scoops up the digit and takes it back to her bedroom laboratory for testing (as she typically does whenever evidence appears), then convinces her older sister she was hallucinating in an effort to push her out of the house and along on her honeymoon, which thankfully works. Not long after the finger’s discovered, Flavia’s first ‘client’ appears with a request that Flavia and Dogger find some personal letters that have gone missing. This is the first book to introduce the new amateur detective agency that the two friends have created, and as expected, they’re extremely adept at solving the (surprising amount of) murders that crop up in their small town of Bishop’s Lacey.

What’s great about these books is the continual evolution of Flavia. Although I absolutely loved her when we first met back in book one, I do enjoy seeing her mature into a young woman (I believe she’s 14 in this book). For instance, this is the first time she begins to show a glimmer of romantic interest in someone. Although their connection is extremely subtle and a very small part of the plot, it felt like foreshadowing for Flavia’s future relationships.

Her connection to her family also continues to develop; she admits missing her older sister (even though they rarely got along when living together), and her fondness for Dogger hits all new highs as they work on solving various puzzles together, especially when fighting for respect from the local police force. There are small signs that Flavia’s tough exterior are beginning to crack as well; she struggles to sleep some nights, finding herself in tears without any explanation, and the death of her father is still fresh of mind as she opts to wear his housecoat when no one else can see.

There was frequent mention of the year in this book; 1952. However, in past books, especially at the very beginning of the series it felt as though these stories were set in a much older time period. I can’t quite put my finger on why, other than the fact that Flavia’s father tended to favour the old-fashioned way of doing things (like listening to the radio as a family), but the reliance of religion and the church in Bishop’s Lacey may have a lot to do with it as well. Flavia doesn’t go out much, other than to take her bike ‘Gladys’ into town to visit potential suspects. The social events that go on at their local church seem to provide the majority of the entertainment, and people gossip an enormous amount as a way to fend off boredom. The citizens also seem to rely on books as a trusted stand-by for keeping busy, which I of course wholeheartedly endorse. It’s more an atmospheric affect that this all culminates in, so I’m guessing Bradley is nostalgic for an older, simpler time that he’s decides to imbue in Bishop’s Lacey.

I’m hoping that this new partnership with Dogger means there will be many more Flavia books to come. There seems to be no shortage of dead bodies in her small town, so like my other favourite detective Jessica Fletcher, I do hope the murders persist around her so I can continue to indulge in some good old-fashioned mysteries.