Book Review: The Only Good Indians by Stephen Graham Jones 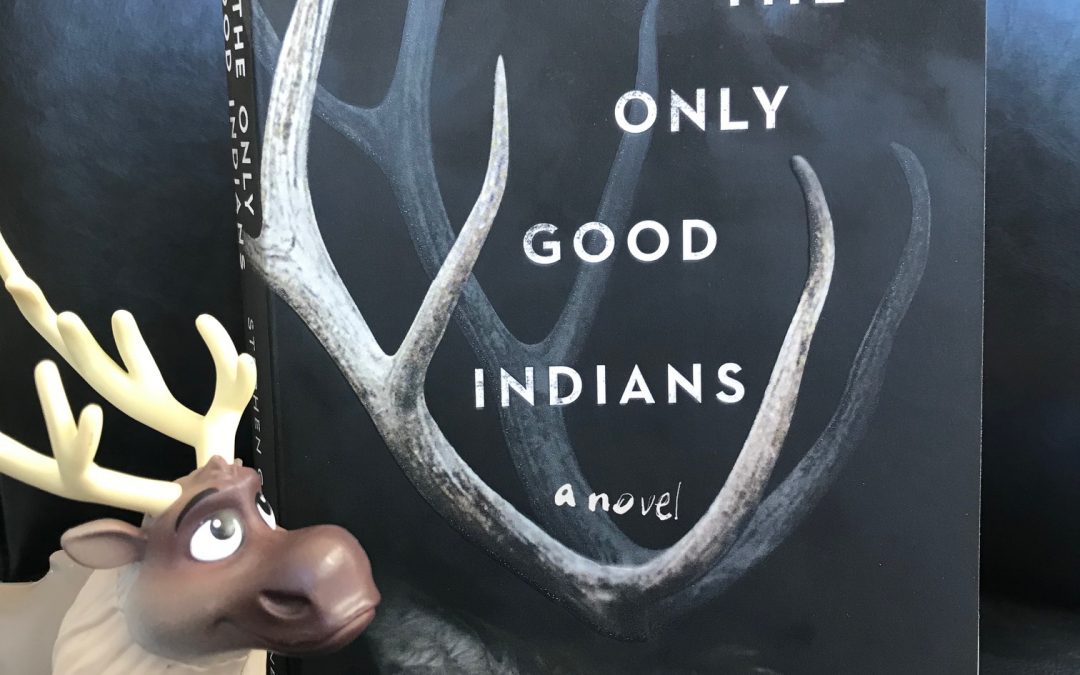 Ever since reading There, There by Tommy Orange a few years ago, I’ve been eager to buy more books about the American Aboriginal experience. These books are hard to find (at least as a Canadian, they seem be hard to find), and other than Louise Erdrich, I’m having trouble thinking of other Native American writers (please recommend some in the comments!) It was this curiosity that led me to pick up The Only Good Indians by Stephen Graham Jones, a horror book that’s landed on all the ‘must read of summer 2020’ lists. And honestly, if I can’t enjoy a little horror in the summer of a pandemic, when can I?

Four friends live on a reserve and go hunting in a zone forbidden to them as it is set aside for elders only. They ignore the warning and find a huge herd of elk, shooting a few to bring home for meat. One of the men, Lewis, shoots an elk who happens to be pregnant, which is rare for that time of year. He feels so guilty about this he persuades his friends to help him carry as much of her back to the truck as a way of honouring her death, then he buries her fetus. Around the ten year anniversary of this ill-fated hunting trip, the four friends begin to experience bizarre, haunting visions of this same elk, while the first of their group, “Richard Boss Ribs” dies a strange death in a bar parking lot. The death and gore continues throughout the story, enough to satisfy any horror-lover looking for a good scare.

This book is a satisfying read for both horror and literary fiction lovers. I was really impressed with the character development, each person standing out on their own, even when we engage with them for only a few pages before they are killed off. The majority of the characters are Indian, so many are fighting against an ongoing tension between expressing their heritage and the modern day realities of living in a country that is outwardly racist towards them. This challenge manifests itself differently for each character, but is also constant, quietly working in the background. Most make jokes about it, wondering out loud what makes them a good Indian, while others, a young woman in particular muses on the hurtful saying “…the only good Indian is a dead one…” (p. 161 ARC). Although I haven’t read much American Aboriginal literature, this is a common theme in Canadian Indigneous writing: the push and pull of honouring one’s ancestors while trying to make a new life for yourself, one that fits into the unfair expectations of a white society.

Aside from strong characters, the writing is a welcome mix of dark humour and memorable lines, one of the (grossest?) being this description of drinking a V8 juice: “He doesn’t like the way it coats his mouth like cold spaghetti sauce or the way it clumps down his throat like throw-up he’s having to swallow…”(p. 134 of ARC). This seems like a random quote to choose, but it demonstrates how visceral the writing is, a tactic horror writers use to simultaneously prepare and disturb their readers for what’s to come.

The plot chugs along in a somewhat uneven manner, which is my only complaint about the book. After a quick death only a few pages in, character development dominates the first half of the book, setting up the cursed hunting trip and exploring Lewis’s life in detail. Once we move on to the other characters in the second half of the book, the action picks up speed, more reminiscent of your typical horror novel. Strangely, the climax is strung out over 50-ish pages, which seemed much too long. It lost some of its ‘terror’ factor by spreading itself thin, giving the reader too much time to really analyze what was going on. Horror needs to move at a certain pace to keep the tension going, and unfortunately it just petered out by the end for me. Still, this book succeeds as a work of literary fiction with supernatural elements woven throughout, and even though I wasn’t on the edge of my seat the entire time, I enjoyed the experience nonetheless.