Book Review: The Union of Smokers by Paddy Scott 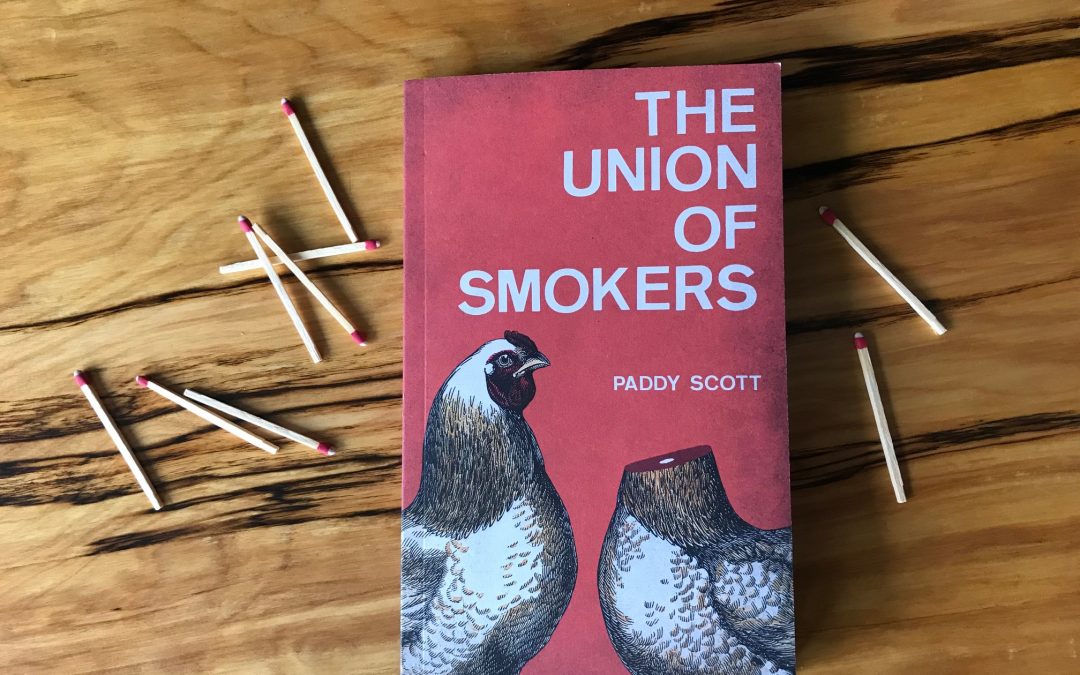 I’m always excited to announce a book review from a new (to me) publisher. Invisible Publishing is wholly Canadian, and based on this first offering of theirs that I’ve read, it’s a small press you should pay attention to and support with your hard-earned book bucks. The Union of Smokers by Paddy Scott is a quirky little book. It features Kaspar, a 12-year-old narrator who we spend the day with, and we know going into the book that he dies that same day. Although it sounds terribly depressing, knowing this doesn’t cast a gloomy cloud over the whole book, in fact it makes you enjoy Kaspar’s antics even more. He speaks directly to the reader as he goes about his day, which involves biking into town twice to replace a dead canary, following his crush at her place of work, and offering various people cigarette butts as he tries to make new friends. Kaspar is humble, matter-of-fact, and quite old fashioned due to the fact that he’s been raised by his grandparents on an isolated farm for most of his life. His father died in mysterious circumstances while his mother disappeared when Kaspar was a baby, and the more we learn about him, the more we learn that he is anything but ordinary.

Kaspar lives in an industrial small town where most people are employed by the local creosote plant. Not surprisingly, this plant also pollutes the majority of their environment, killing fish in the local river and causing cancer in many of its citizens. But it’s not all bad, because the numerous fires at the aforementioned plant also provide a great source of entertainment (insert horrified expression here). It’s the ’60s, so even though it’s obvious this plant is hurting people, nothing much is done about it. Kaspar is smart enough to fish in different parts of the canal that aren’t as subject to pollution, which is just one of the many reasons we learn how intelligent this young boy truly is.

There are elements of a domestic thriller in this book, although I’d land it firmly in the ‘literary fiction with a twist of humour’ category. Kaspar alludes to some peculiar, even dangerous moments of his childhood, especially those surrounding his father’s death. He stretches the reader’s curiosity as far as possible, dropping clues of what really happened in between his running commentary on the value of keeping a ‘butt bag’ (basically a little baggie of cigarette butts he finds that still have a few puffs in them) and the impracticality of girls’ shoes. He’s a very observant 12-year-old, so not much goes unnoticed by him. There are a few things that he doesn’t comment on directly, but based on his descriptions, the reader understands what’s really going on, even if Kaspar doesn’t. I liked this feeling of omniscience as a reader because it helps situate you in the plot and setting, firmly planting you right alongside Kaspar as he exasperates the town locals with his run down bicycle and black rubber boots.

Because he’s used to watching older movies with his grandparents, his dialect is somewhat outdated but always amusing, which is endlessly entertaining to imagine coming from a kid’s mouth. Here he recounts a run-in with a nun at his school:

“She pulled me aside and finger-waggle-reminded me that she was the one who promoted me to the legion and that I had not only embarrassed the school, but her too. When I hit her with my “suck my potatoes” comment for my Charles Schulz theme essay a few days later, and she kicked me out of class, that was her way of telling me my leash was only so long” (p. 155).

Kaspar is not only the main source of entertainment in this book, he IS the book. His speeches, his impressive ability to take charge in any situation, his practical nature combined with the work ethic of growing up on a farm all come together to create one of the most memorable characters I’ve read in years. Although his day seems extraordinary with all the strange and dangerous situations he finds himself in, it’s his manner of storytelling that truly keeps the pages turning. And because we only follow him over the course of one day, there is lots that is alluded to, but never confirmed. This inability to know anything for certain forces the reader to just sit in the moment and enjoy it for what it is, especially with the knowledge that this is Kaspar’s last day on earth. I highly doubt a larger publisher would ever release a book like this, it’s just too different to bank on big book sales. But, by taking a chance on this slim novel, you’ll be richly rewarded with a new character that will remain with you for months to come.