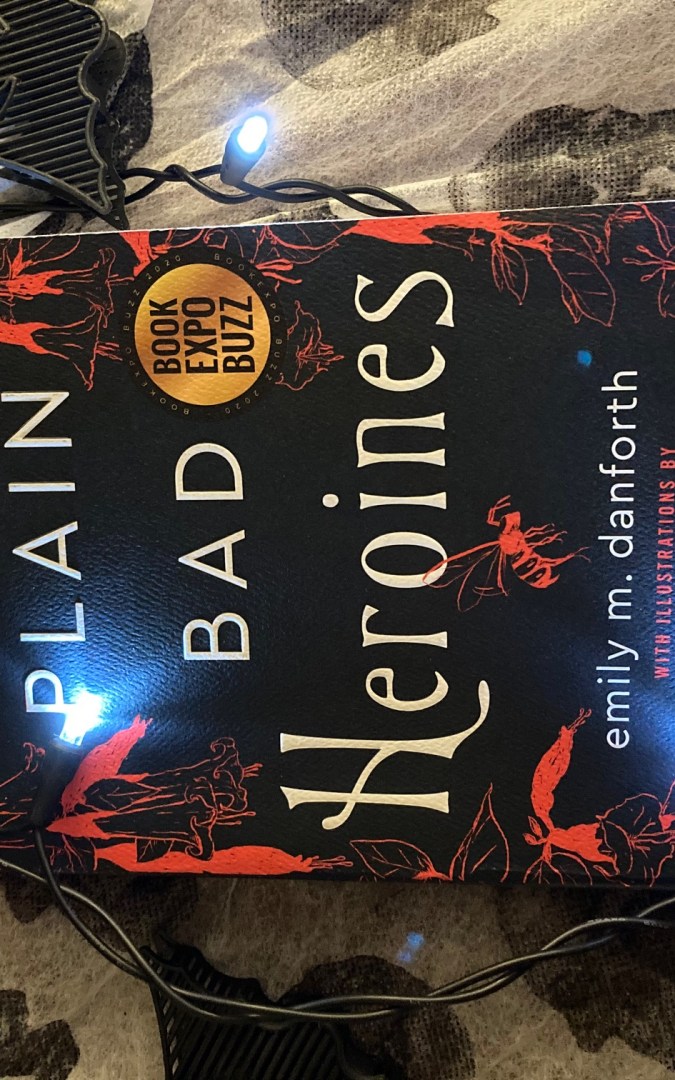 I don’t normally review YA books, which is why I wasn’t familiar with the author emily m. danforth. She’s the writer behind The Miseducation of Cameron Post which is apparently quite popular, so I have no doubt her name is familiar to many who read YA widely. Plain Bad Heroines is her first novel for adults, and although I don’t disagree with this particular label, I think I may have come across my first work of ‘new adult’ fiction. This is a strange little subgenre that a few publishers have attempted to market, suited towards people who have aged out of YA but not interested in reading adult fiction featuring us middle-aged folk. Can you see why this is sort of a weird genre to begin with? Despite this vague description, I would consider Plain Bad Heroines the perfect example of a book that belongs firmly in that category because it comes across as too old for YA, but not old enough for my tastes. Let’s look at this a little more closely…

In the early 1900s, on the coast of Rhode Island is an all-girl boarding school named Brookhants (pronounced Brook-haunts) which bears an unfortunate reputation when three of its young pupils pass away under strange circumstances. Over a century later, young celebrity and ‘it’ girl Harper Harper is cast in a movie about this supposedly haunted school, which is also the inspiration for a book all about its cursed history. Switching back and forth from present day to the early 1900s, the narrative remains focused on Brookhants and the power it holds over the characters that engage with it. Libbie Brookhants is the school principal who lives with another female teacher from the school, and although they aren’t open with their romantic love for one another, everyone understands they are essentially a couple. Fast forward to today and Harper Harper is an openly queer woman with lots of lovers on the side, and who could blame her when she’s as famous as she is? There are very few male characters in this book, and those who are included are generally petulant and unreliable, or simple foils for their female counterparts. The women (mostly bi and queer) are the true stars of this book, and instead of being relegated to the margins of history, they are given the attention and page space they truly deserve in this book.

I read this as part of my Halloween lead-up, which it most certainly is. The bizarre deaths of the young girls is brief but creepy, and the more we learn about the history of Brookhants and what really happened there (even before the school opened) the more we realize what a complicated tale of misfortune this truly is. Independent and head strong women seem barely tolerated these days, so back in the late 1800s and early 1900s they weren’t simply tolerated, they were feared, and many used this as reason enough to hurt them. Like this book about witchcraft and its scapegoating, women who lived alone, or even with other women were objects of suspicion, which is where the true terror of this book is rooted.

This is a gothic book with elements of present-day supernatural scares thrown in to the mix. For instance, there’s an eerie scene where an Alexa speaker comes on chanting a strange song that Brookhants is known for while one of the actors is alone in the house. Bridging both time periods is the constant appearance of yellow jackets (wasps essentially) which act as murder weapons, warning signs, and reminders that you can’t escape a pre-destined curse. Strangely, I noticed 3 wasps over the 5 days it took me to read this book; I found two dead ones, and I dreamt about another. Seeing this many in such a short time is quite rare right now (it’s Fall y’all!) so despite my better judgement I found myself getting a little creeped out even when I wasn’t reading.

I enjoyed the atmosphere, the characters, and the plot, but overall I found this book just too long. My ARC was 619 pages, and there are a few elegant illustrations, but not enough to make a dent in the overall page count. There could have been considerably less build up to the movie being cast, as this stage of the plot seemed to drag on inordinately long. As for my declaration that this is new adult fiction, the present-day characters themselves were well-drawn and believable, but they also come across as very juvenile. The older characters from the historic parts of the novel weren’t developed enough for me to connect with, so the current generation are the ones I remember most when reflecting back on the book. Friendships and casual romantic hookups are the focus of this particular group of women, and no one has much interest in the future. That could be because they’re simply trying to make the movie and come out of the experience unscathed, but the narrative is very concentrated on fleeting emotions and plans, not much more.

I’m probably aging myself by writing these things, but it’s proof that I’m viewing this book through a very different lens that many of its readers most likely will. Other than its unreasonable length, my observation of its genre is not a criticism, it’s simply that; an opinion. No doubt what I’ve described has piqued the interest of many, so go forth and read, just set aside a few days or weeks to get through this one.