IveReadThis Jr. Edition: The World Around Them 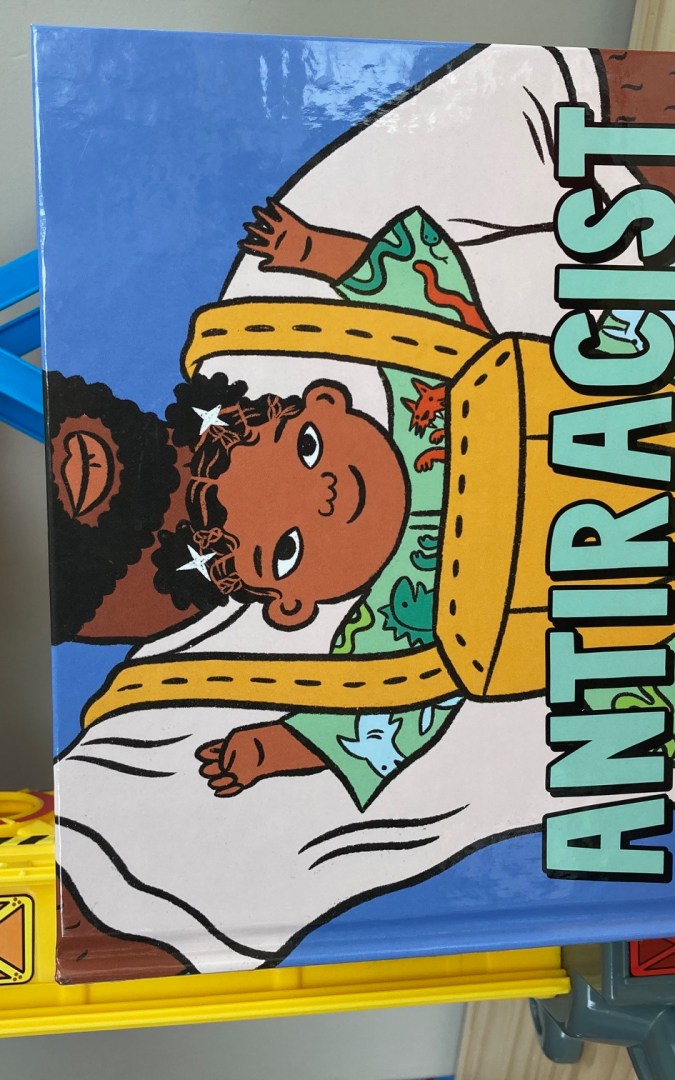 When I saw the announcement for the upcoming release of the picture book Antiracist Baby by Ibram X. Kendi, illustrated by Ashley Lukashevsky, I was really excited. I had been looking for a way to approach the topic of racism with my 5 year-old because she hears the term on the radio, but my husband and I haven’t really taken the time to fully explain to her what it means. I was also looking forward to reading her this book because it’s written by a black person, and although she reads many books written by people of colour, it was important to me that a book about racism be written and illustrated by a BIPOC (black indigenous person of colour). As with any difficult subject like this, I always look to books to prompt the conversation, because I find they introduce a topic which then makes it easier for us to have a discussion about it afterwards. Sadly, I was disappointed by this one. The text isn’t really written for children, instead, it reads like short pithy statements that adults need to keep in mind when raising their children, which was not what I was looking for. And if the intended audience is parents, why is it a picture book? The only part of the book that I will return to again and again (aside from the beautiful illustrations) is the reading guide at the back, which is a direct letter to caregivers on ways that speak about race and racism with our kids.

Because of these prompts, I was able to start that much-needed conversation with my daughter, but I was really hoping the book would speak directly to her, rather than me attempting to translate it for her. Each page is numbered, sort of like a step-by-step guide, but the little text that is included really isn’t helpful for kids, for example page 7 says: “Nothing disrupts racism more than when we confess the racist ideas that we sometimes express”. That’s it. Now, that’s a wonderful tip for adults to keep in mind, and believe me, I have many people in my life that I’d like to read this book to (because I can be passive aggressive like that) but still, how is that helping my child? She didn’t get it, and although she didn’t dislike the book, it didn’t speak to her the way I had hoped it would.

Next we have a book that touches upon another big subject, one that isn’t entirely understood even by adults: evolution! How Did I Get Here? by Philip Bunting starts with the universe fitting into a tiny space (the size of an orange according to this book) and then we move into the big bang, and the multiplication of tiny cells that eventually formed planets, and our solar system. From there, Bunting (briefly) describes the evolution of planet earth and the cells found on it, eventually ending with the progression of human life with a cursory glance at the growth inside the womb. Whew! It’s a lot to pack into a fairly short picture book, but it’s filled with bright and basic pictures that caught the eye of my 2 and 5 year old, so both enjoyed the little science lesson. My 5 year-old in particular liked the little speech bubbles coming from the characters which added a light-hearted tone to the awe-inspiring facts that are handed out on each page. A little moon will exclaim ‘oh my’ while a caveman will high five another caveman after they’ve managed to produce fire.

I enjoyed reading this book with my kids because it taught me basic things that I really should know, like the fact we all came from a single-celled being at one point. The text is easy to read and understand so this book works for a wide range of ages, and it’s the kind of story that you can return to multiple times and learn something new, or prompt a new kind of discussion. Clearly kids are absorbing the information they read in these types of books because my daughter corrected me a few days ago when reminding me which planets were between the earth and the sun, and I’ve never been so simultaneously ashamed and proud as I was then. Introducing these big ideas with a bit of humour seems to be an effective strategy, so I’ll be on the look out for similar books in the future.

Continuing with the theme of ‘the world around us’ is If You Come to Earth by Sophie Blackall. This is definitely my favourite of the three, and both my kids enjoy it because there is little text and gorgeous illustrations. It’s written as a letter to an extra-terrestrial being with some very basic information about earth, starting with our location in the solar system. It also touches upon; what humans look like, how we spend our time, where our water comes from, what’s found in the ocean, what’s found on land, the fact that we age and each age group excels at different things, etc. The pictures detail people doing a variety of things (see below), the kinds of animals found in the sky and the different fish in the ocean are bursting with detail, and we paused at each page well after we finished reading because there was so much to take in.

Embedded within the text is a subtle message about differences: “Some of us have more food than others. We all need food and water to survive”. Another page depicts children using sign language and reading braille, each with the entire alphabet drawn out for kids to ponder. Many picture books struggle to give kids a bigger picture of what it’s like to live here, but Blackall does this without judgement or guilt, she makes simple to grasp statements that are unequivocally true. This lack of context gives children the mental room to contemplate what’s being said, or it gives parents the opportunity to step in and offer more context, whichever your child may be more receptive too.