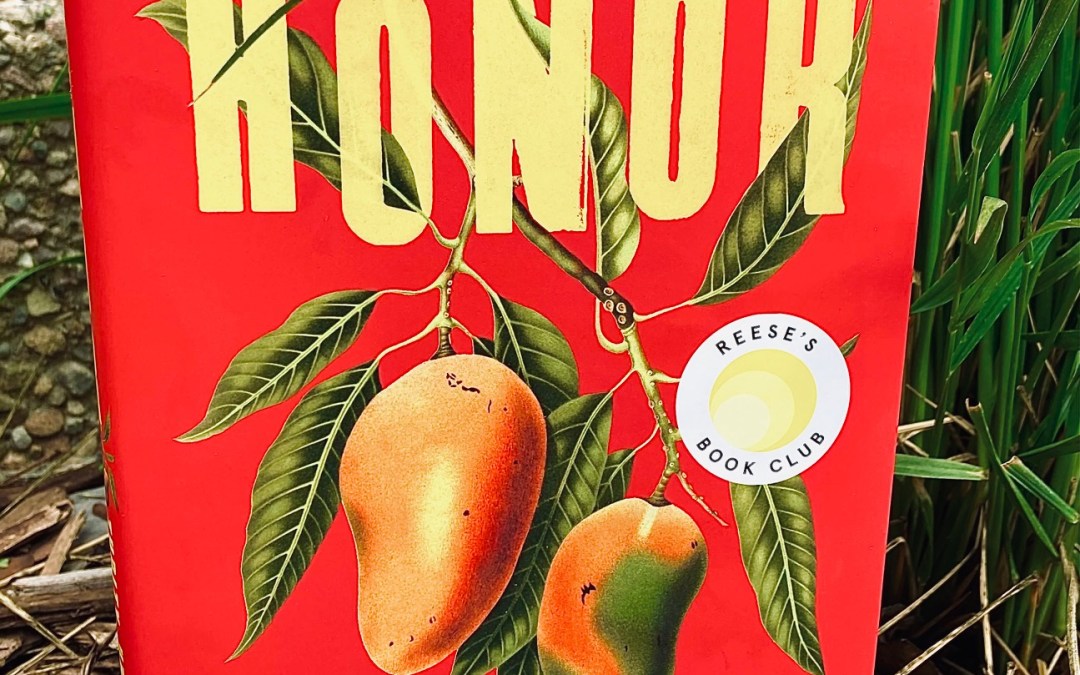 This is a story that will stay with me for quite awhile. The details, setting, and circumstances may fade from my memory, but I’ll always remember the protagonist Meena – the woman who sacrificed her body for those she loved. Honor by Thrity Umrigar* is a bestselling novel, many people have read it, including thousands of book clubbers as it also has the Resse’s Book Club stamp of approval. As much as I loathe to admit that I follow an actress’s book recommendations, I typically enjoy everything she suggests, and Honor is no different. It feels strange to declare my love for a book that’s so filled with people’s pain, but it’s true, I loved this one despite the horror I felt as I continued through its pages.

Smita has interrupted her long-awaited vacation to help a fellow journalist. She has flown to India on a moment’s notice, and upon arriving realizes her friend wants her to help her with a story. So Smita travels to a poor village in the rural part of India to interview Meena, a Hindu woman who was attacked by her own brothers for marrying a Muslim man. Her husband was killed, and she was permanently injured, so she is pressing charges against her brothers and the villagers who helped set the fire that took so much from Meena. Smita is reluctant to even travel back to India because of her history; she was born there, but her family fled when she was a teenager. Despite her extensive international travel as a journalist covering major world conflicts, Smita can’t help but resent and despise her homeland for what she sees as its backward ways, crowded and dirty streets, and horrific treatment of women. In addition to this swirling of emotions, Smita is accompanied by an interpreter named Mohan, an Indian man who loves his country. He is set on showing Smita the beauty of India that she’s forgotten and together they face the horrors of Meena’s life and circumstances in the face of their growing fondness for each other.

Most people are aware of the atrocities that can be found in other countries, and in India, we often hear about the brutality of the caste system and the acid attacks on women. Even though this is a work of fiction, we know that cases similar to Meena’s have occurred, and Umrigar confirms this in her acknowledgements. When Smita meets Meena, and observes her scars and challenging life firsthand, I felt simultaneously sick to my stomach for her situation (which is no doubt the life of many women in rural India), and grateful for my life of luxury in comparison – physical and emotional luxuries and freedoms that women like her will never experience. Smita mirrors the readers’ emotions in many ways; she is uncomfortable in India’s heat and poverty, and often daydreams of her austere, clean and well-appointed apartment back in New York City. But Mohan’s character acts as another buffer – he wants to show Smita the joys of India in the crown of flowers a cow wears, or the heady scents of jasmine that fill the night air. Ultimately, this book is about a place that contains both horror and beauty, and reconciling those vastly different sides.

It isn’t until about two thirds of the way through that we discover why Smita’s family moved to America, and as the suspension builds, we realize it’s going to be bad, but not as bad as what Meena has experienced. It’s this stacking of traumas that generates a feeling of guilt in Smita – why was she given the chance to escape, when Meena is not?

“She could cover heartbreaking events in Lebanon and South Africa and Nigeria and not feel complicit in those because they had not happened in her own country. But despite her American passport, despite the many miles between her American life and her Indian childhood, there was no denying it – sitting with Meena on that cot, she had felt complicit in what had happened to her.”

Some short chapters are told from Meena’s perspective, but most of them are told through Smita’s eyes, which makes Meena’s circumstances seem even more unbelievable. And some of the characters that are introduced to us, for example the leader of the village who ordered the attack on her husband, are depicted as evil but still…human. Smita observes that even though these men are playing with people’s lives and hold power over an entire village, they still observe the caste system, and refuse to stand taller than Mohan when they realize he is wealthier than them: yet again another contradiction that Umrigar depicts in this book. This isn’t a book for everyone, it’s an emotional read that will haunt you, but the writing is so incredible and expansive that the turmoil is worth it.

*One of the joys of blogging for as long as I have is discovering the fact that I reviewed a children’s picture book written by Umrigar and totally forgotten about it! Check out that review here.