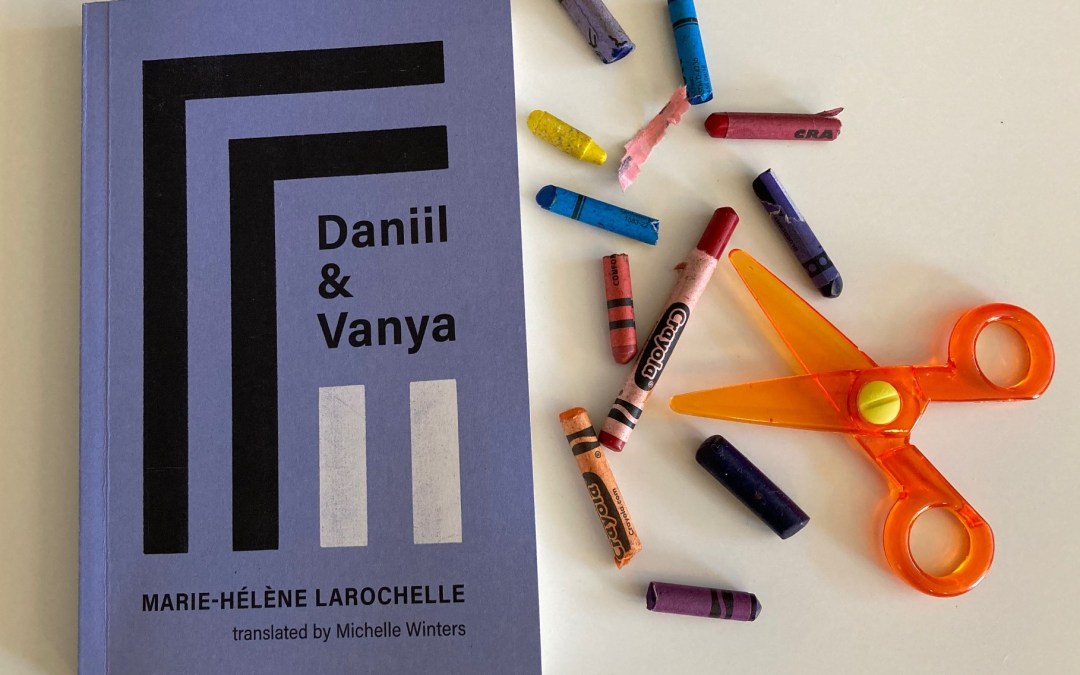 Hoo boy, this book is tough. It’s a difficult story, disturbing on many levels, but compulsively readable at the same time. There are, thankfully, trigger warnings at the beginning, (they call them ‘content notes’), so I’ll reiterate that before my readers go any further. Daniil & Vanya by Marie-Helene Larochelle, translated from the French by Michelle Winters includes references to miscarriage, self-harm, violence against and by children, and sexual abuse. It asks the question, what makes a monster? What do we consider monstrous? What is destiny, and what is by-design? Because I’m a parent, I think I found this book extra upsetting, and perhaps people who chose to remain childless wouldn’t be as bothered by the plot, but most, regardless of their family situation will find this extremely challenging, that I’m sure of. It really made me question why I read, if not for pleasure? I wanted to read this book because despite its dark subject, it has been reviewed positively, and I don’t always read for fun, sometimes I read to gain a new perspective. This book definitely offered that.

Emma and her husband Gregory lose their first child in a difficult stillbirth, and traumatized from that experience Emma vows to never get pregnant again. Instead, they adopt two twin boys from Russia, and are elated to bring them home to Canada and incorporate them into their stylish, design-driven life. But the boys they bring home don’t match what was recorded in the adoption file, and frantic with the stress of motherhood, Emma isolates herself and the boys in attempts to normalize their behaviour. A strange sense of detachment surrounds Daniil and Vanya, and their ability to quickly become violent frightens those who attempt to befriend them. Unfortunately Gregory and Emma are as naive as they are stubborn, and don’t seek professional help even when others urge them too. We follow the boys as they become teenagers, obsessed with physical perfection and their changing bodies. There is no happy ending in this book, but I doubt anyone will accuse me of spoilers; how could there possibly a happy ending to this?

As you would expect, this book is all about the characters. The plot is driven by their actions, or in this case, inaction, and even though the twins are the center of attention, Emma and Gregory are also expertly drawn, coming alive on the page. It’s not a long book, but it doesn’t need to be, I was so fed up with Emma and Greg that I didn’t want to spend anymore time with them. I was desperate for them to see their own responsibility in what transpires, that perhaps attempting to serve only organic food to their children wasn’t really what these boys needed, but of course that never happens. This novel doesn’t point blame in one direction, but instead, depicts each person’s actions coming together to form a perfect storm of anger, resentment and violence. Greg and Emma’s privilege and wealth insulate them from outside interference, even when it’s clear their family needs help. Social safety-nets in Canada are typically activated when specifically requested by a family member or social worker, so why bother focusing on the families that clearly want for nothing? We assume that a neat and appealing appearance is a reflection of what’s on the inside, but what if the only thing keeping a family together is the effort in keeping up that appearance?

I didn’t expect to love this book, and I honestly can’t say I liked it because it made me so uncomfortable. Still, I am in awe of this book, of its power to agitate and affect me so deeply, it’s been over two weeks since I finished it, but I can’t forget about it. Truth be told, I sort of want it out of my house, but there’s no one I can responsibly give it too without fear of upsetting them. Still, there is value in this kind of literature, it’s important that we read about all sorts of things, not just the stuff that’s pleasant. This is life. This book is realistic, which is what makes it all the more painful to read.

There’s a scene towards the beginning of the book, when Gregory and Emma are in Russia heading to the adoption agency, and they come across a young boy living on the streets, sniffing glue and getting high; they estimate his age to be about 10, Emma comments on the fact that his hands still have that small-child chubbiness to them. That moment is so striking because it places a young vulnerable child in an adult position and role, which is simply foreshadowing of what’s to come. Still, it has stayed with me because I know that children in these poor countries are faced with that and much worse, and as a parent in a first world country, it’s extremely difficult to come to terms with.

You can probably tell how seriously I’m taking this book just by all the introspective questions I’m asking in this review. This fictional story opened my mind to so many different avenues, and for that reason alone I want to recommend it to others. It’s certainly reader beware however, so read the content warnings closely before you commit.