Book Review: God Telling a Joke and Other Stories by Dave Margoshes

I love reading short stories. I seem to flip through them faster than a novel, simply because it it forces you to reach the end of one story before you put your bookmark in. I also find (and I know I’ve said this before) that they’re typically better written than novels, because the writer has such a limited space in which to make their point, so the sentences are stronger and more succinct. Additionally, writers typically submit their short stories to literary journals before they compile them into a book, so each piece is typically re-worked a few times before it makes it into the final collection. I know this is a painfully obvious remark to make, but I’ll say it anyway; when you’re enjoying a book, it’s much more difficult to put down. 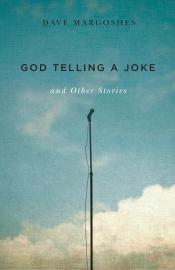 Dave Margoshes‘s God Telling a Joke and Other Stories is no exception to what I’ve outlined above. Each story in this volume is tight, to the point, and enjoyable to read. Margoshes also demonstrates a wide range of perspectives, which only increases the joy of reading his short stories. The book starts off slow with a story called “Desert Isle or The Compunction of Narrative” which I didn’t really like, or understand. It came across as a more self-congratulatory story about writing and authorship more than anything, and it left a sour taste in my mouth. The last story of the collection “God Telling a Joke” was my favourite by far; it was laugh-out-loud hilarious but still included a well developed narrative and protagonist.

So some stories were much stronger than others, which is common when stories are grouped together like this in one book. Margoshes could have benefitted from cutting a few from this collection, which is a kindness to the reader because it recognizes that not all pieces were ready to be published. Having very strong stories next to weak ones is not a huge problem, however it does create an unbalanced read, leaving me with mixed feelings about the book in general. That being said, I stand by my initial statement that this is a strong book, because Margoshes is a good writer who knows his stuff. At the same time, I think his editor should have insisted upon a few more re-writes before some of these stories were included, which would have taken this book from a 7/10 to a 9/10.