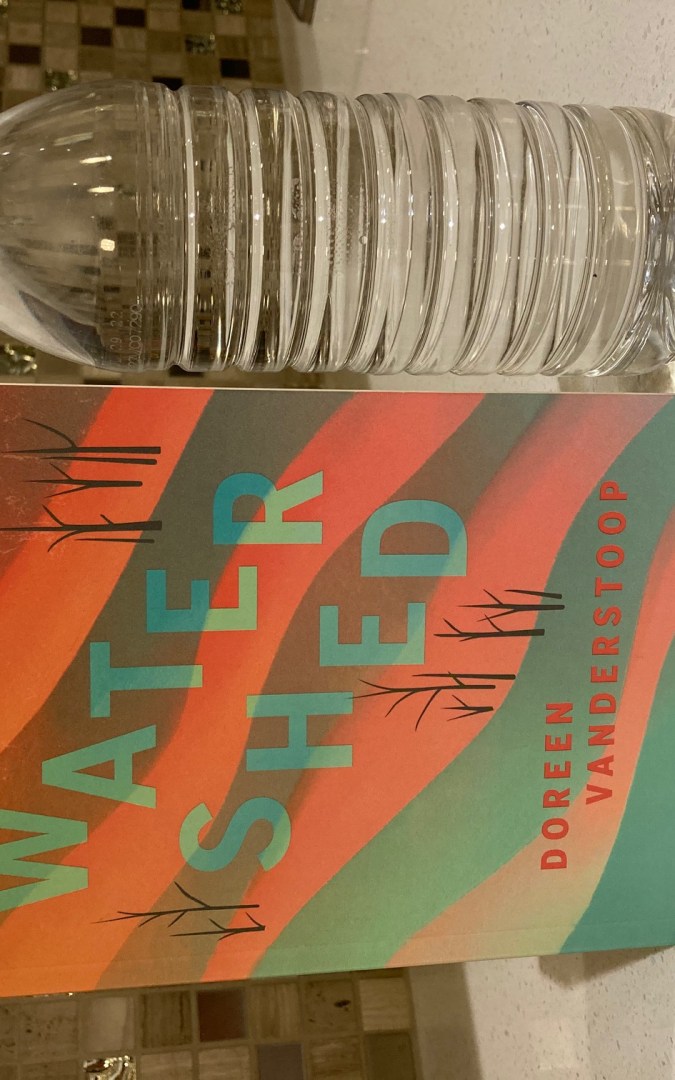 I’ve got another work of climate fiction for you; a genre based on some of our worst anxieties based on what the world may look like as we continue our climb into warmer temperatures. What’s different about Watershed by Doreen Vanderstoop is that it takes place right in my backyard of Southern Alberta. And while it’s always a delight to read a book set in your own province, it certainly takes on a darker tone when you’re reading about a future where indoor plumbing has become a luxury of the past (yikes!). So if you’re feeling optimistic about our climate future, read on, because this will spur you into even greater action to help protect our environment. If you’re already feeling a bit anxious about the state of things, I suggest picking up some David Sedaris instead.

Willa Van Bruggen is one tough lady. Having worked on her family farm all her life, she inherited it when her father passed away, and ever since then she’s been toiling away on it, alongside her dear husband Calvin. They have one son, Daniel, who left the farm to become an engineer, landing an impressive job at Crystel, a company building pipelines across Canada transporting water back to the barren deserts that have been created due to climate change. It’s 2058, and oil no longer runs through pipelines; water does, as it’s the most precious commodity. Other places are drowning due to flooding, while many others have experienced years-long droughts. Because of the dry air and landscape, large segments of the population are forced to wear masks whenever outside ( I know, I know, this hits a little too hard right now!). Willa is fiercely protective of her family’s farming legacy, but she is fighting a losing battle as the environmental state is just too ruinous to make any sort of living off the land. Meanwhile, there are local terrorists intent on blowing up any new water pipeline construction because they are worried it will drain the prosperous Northern Alberta water reserves to serve the dried out Southern Alberta. There is also concern that the Crystel corporation will sell water down to the U.S. for more profit. As you can tell, there is no shortage of conflict in this book!

I should assure readers it’s not ALL bad in the future. There are some bright spots of optimism on our horizon, including this author’s suggestion that by 2058 Indigenous people in Canada won’t be relegated to the margins of society and routinely discriminated against. Roy and Lily are introduced into the plot under less-than-ideal circumstances, but their appearances turns out to be a beacon of light for Willa. Roy is an extremely successful and wealthy indigenous man whose company is leading the clean-up of former oil drilling sites in Northern Alberta. He has married Lily, a white woman, and together they live in a beautiful home, happy and healthy, taking a keen interest in helping others too. His generosity and intelligence both end up helping Willa, and although this is only a small part of the overall plot, it was such a nice change to see an indigenous character incorporated into a story this way. He still maintained his culture, his way of being in the world, yet it didn’t chafe against anyone, or become a plot point in itself. He was simply allowed to be himself. I’m still hoping we can have it both ways in the future; an eradication (or at the very least, a steep decline) of racism, and a healthy environment.

My only problem with this book is the uneven tone. Willa’s storyline is reminiscent of a literary novel, steeped in old resentments, painful family history, all taking place in a barren, dangerous landscape: essentially, a very ‘canlit’ book. But Willa’s chapters are interspersed with Daniel’s, who is living in what seems like an entirely different world. The pacing of his sections are completely different, and at one point, he’s caught up in what can only be described as an action-packed thriller, which completely eclipses whatever is going on in Willa’s life (which, in her defense, is still quite difficult, but pales in comparison to Daniel’s life). I’m never one to complain about variety in books because it certainly keeps the pages turning, and I did find myself racing through the pages of Watershed, but it seemed strange that both these storylines belonged in the same book together. Both Willa and Daniel’s lives were enough to fill one book each, rather than being crammed together in 350 pages.

Considering this is a debut novel, my quibble above is quite minor. Tackling a major subject like this is not easy for a writer, it’s the exact opposite of ‘write what you know’, so building the intricacies of a future none of us recognize can be difficult. The intensity of her plotting is something I’d like to see further explored in a more literary context, so I’ll be keeping an eye out for her next release.