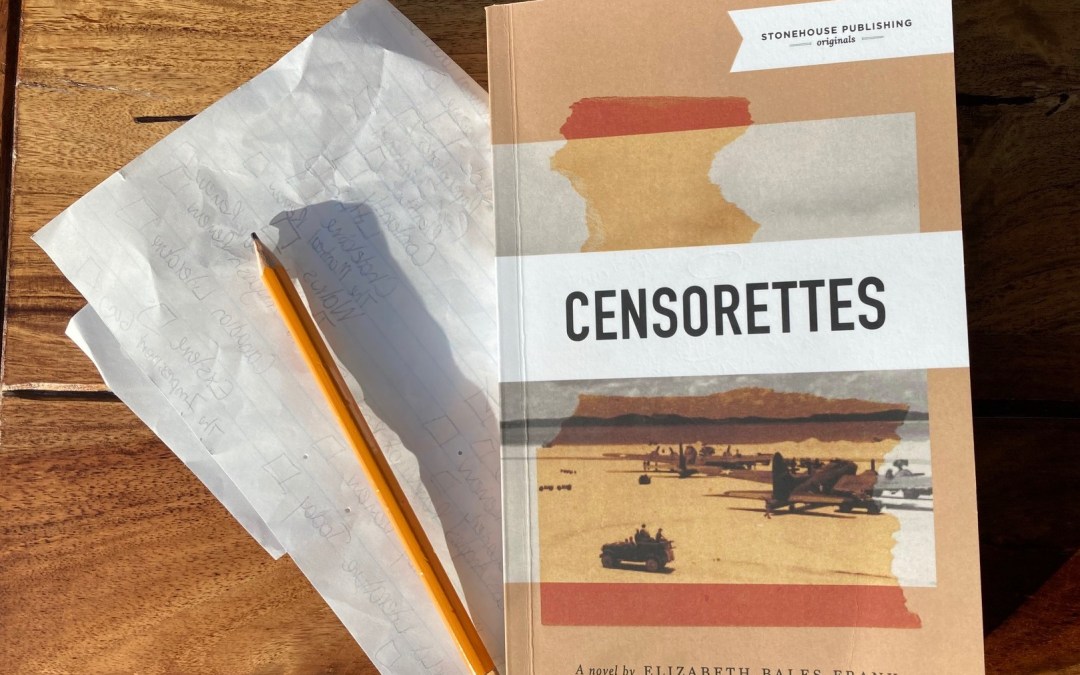 Do not let the drab cover of this book fool you; the pages are full of colourful, vibrant female characters with passion in their hearts, despite World War II raging on around them. Censorettes by Elizabeth Bales Frank is about a young group of British women who read and monitored postal correspondence for hidden Nazi influences and even though historical novels about women’s roles in wartime are flooding the market, I’m still enjoying these deep dives into little known pieces of our feminist history.

It’s 1941 and Lucy finds herself in Bermuda, working as a Censorette, doing her part to help the Allies by putting her impressive grasp of multiple languages to good use. In some ways she’s in paradise; safe from any active warfare, living in the suite of a hotel with other women her age, and just steps away from the beautiful beaches that the island is known for. Except Lucy wishes she was at home in London with her family, or at least what remains of it as her brother is off fighting and her mother was killed in the Blitz. Still, she works diligently, making friends with the other Censorettes and having a few flings with the American soldiers stationed on the island too. It’s not until a good friend is murdered that Lucy’s true strength shines through; she is determined to see the murderer brought to justice, and will stop at nothing to make sure it happens, even when she’s whisked half way across the world on another secret mission.

The power of female tenacity and friendships is at the heart of this novel. Despondent about her current situation, Lucy finds solace in the women she lives with, her fellow Censorettes that are each vividly described as they push through the sorrows of wartime. Mundane things like who picks up the clothes on the floor, and who drops them may seem like a boring topic to touch upon when a war is going on, but these everyday situations that new roommates grapple with bring a sense of intimacy to the book, so much so that I felt like I was living with the girls too. Cut off from the rest of the world with only a few letters getting in and out, they oftentimes slept in the same bed, did each other’s hair, shared clothes, make up, becoming extremely close in the process. This sounds like a strange thing to say, but I couldn’t help but feel a bit envious of their connection and this strange environment they’ve been flung into. Truly making the best of things was what each woman did, and even though their time together ends in tragedy, they certainly succeeded in that goal.

The characterization is most definitely the strongest part of this novel, but the plot is fairly steady and engrossing as well. Lucy is intelligent, and when she happens upon a few letters that seem oddly written, referencing Shakespeare with slightly incorrect quotes, she’s one of the few to pick up on it, fighting with her superiors over whether it could mean something more sinister. Pushing for people to take their beliefs and opinions seriously is a running theme throughout the book. Each Censorette is pushing against societal biases to assert themselves in different ways, and although Lucy is clearly a smart person, she is often brushed aside because of her gender. One of the American soldiers is particularly pushy, quick to viciously confront her when she refuses to marry him. It’s disheartening to read about the barriers women faced back then; even when they were going above and beyond to aid in the war effort, their achievements were so easily dismissed.

Finally, a snarky little comment coming from my Canadian perspective about the American attitude, please indulge me! Near the beginning of the novel, the girls are talking about an upcoming dance with the American men, and one of them jokes that they may be able to pick up some secret intelligence by socializing with them:

” ‘ You never know what a besotted soldier in the arms of a pretty girl might let slip about U.S. foreign policy.’

Do those words sound at all familiar? I barked out a laugh when I read that line-hopefully this sort of perspective will be left in the orange-hued past of our neighbors to the south.