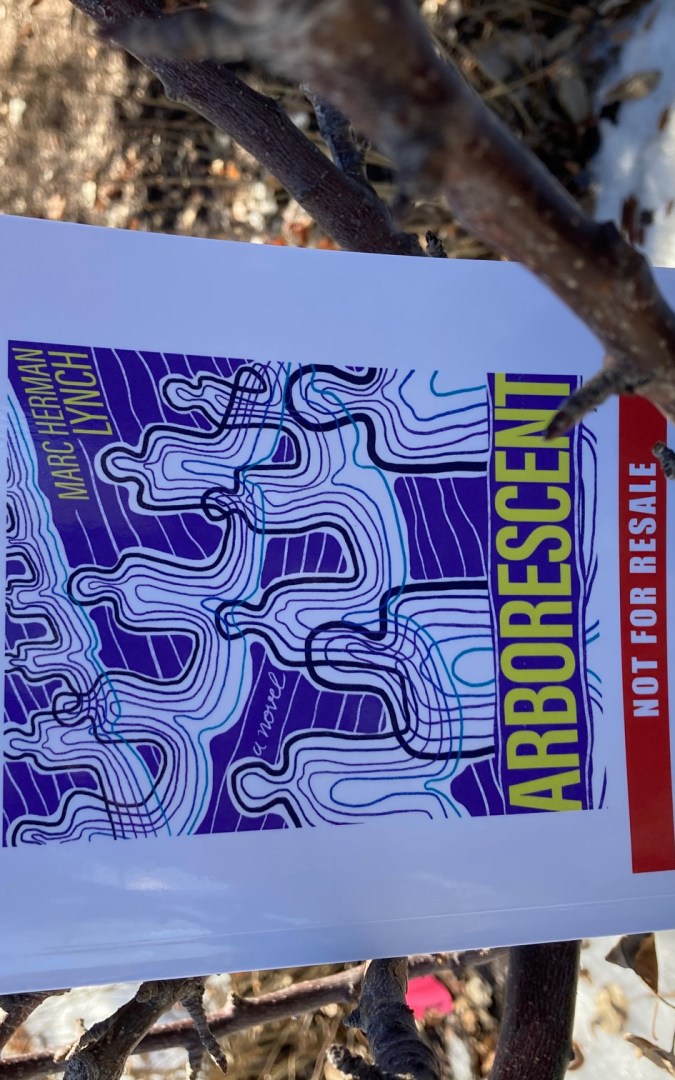 One of my upcoming segments for radio is a focus on debut authors from independent presses in Canada, because the Simon and Schuster acquisition by Penguin Random House is a scary one for many Canadians. Although it won’t be all bad for the reader, it will certainly make things harder for booksellers and authors, so I’d like to highlight some of the amazing talent that our indie presses are publishing in Canada, despite the challenges they continue to face. Arborescent by Marc Herman Lynch is a local-to-me book, as Lynch is a Calgarian (yay!), and he delights with numerous references to Calgary landmarks in this book, but I should also mention he does not call the city Calgary (although it clearly is), he refers to it as Moh’kins’tsis, which is the traditional indigenous name for Calgary. Lynch himself is a first generation, French Chinese immigrant, but I really loved the fact that he gives this not-so-subtle nod to the people who came before us. There are so many reasons to celebrate this book, including the creepy storyline, but I’ll get into that later…

The prologue begins with a man named Jeb, who lives in the country and likes to catapult old junk into his field. The story quickly turns fantastical when his chest bursts open with stars and he dies. Then the book is split into three further sections, each a first-person perspective from different tenants of the crumbling Cambrian Court apartment building that boasts a creepy ogre-like landlord who eats only pistachios. First is Jeb’s son Nohlan, who leads a mundane life working at a cyber cafe and mooning after a self-professed psychic named Celine (she comes in and out of the storyline). But then Nohlan starts to notice strange things, like a leaf poking out of his belly button, and as the novel progresses we learn he is turning into a tree, which explains the strange title of the book. Next we meet Hachi who performs kabuki ( a form of Japanese drama and dance) and is slowly being inhabited by Oiwa, a murderous character that reminds one of that terrifying little girl from the Ring. Last is Zadie Chan who lives in Cambrian Court with her mother, who also happens to be hoarding a bunch of junk from a dead friend. Each storyline merges together at the very end, when reality as we know it becomes even dimmer, forcing the reader into a chamber of horrors with striking imagery to keep us up at night.

I don’t normally read books like this; I hate when I don’t know exactly what’s going on so most fantastical storylines don’t appeal to me. But this book challenged me in a positive way, because although there were unexplainable occurrences, I still felt rooted to reality through the impressive characterization, which is truly the highlight of this book. Each section focuses the majority of its word count on establishing character; their current situation, what they are working against, who they interact with and why. It wasn’t until the very end of each perspective that reality started to unravel, so I found it easier to suspend disbelief for a few pages until we found ourselves back in the body of another, back into the mundane aspects of their life that I can’t help but find engaging. And like any good horror flick, the process of moving from creepy reality to outright fear is a well-trod and accepted one, so once I grew comfortable with this expectation, the book flowed easily for me.

The writing is fairly eclectic, with a mix of humour, social commentary, numerous similes and descriptions, and as mentioned above, horror. I was particularly impressed by Lynch’s female voice, enough to suspect that he had a few female readers give him some pointers on the internal remarks us women so often think, but rarely voice. Take this scene where Hachi is confronted by the male landlord:

“Hachi wasn’t sure if he was making a statement or trying to incite conversation. From what little she knew of him, she decided it was best to try to avoid contact entirely, but, like most men, he wanted an audience” (p. 83 of ARC).

Not only is Lynch sensitive to this gender imbalance that occurs regularly in conversations, but he really nails this general unease that younger women feel around older men, and the pressure to stay and listen attentively despite a lack of interest to do so. Of course this isn’t impossible for men to understand, yet the fact that it’s included in this relatively short book, along with other gender-specific references sprinkled throughout, was a welcome surprise for me.

The publisher of this book, Arsenal Pulp Press has enjoyed some increased attention of late due to the fact that two of their books were finalists in this most recent Canada Reads competition. Their book Jonny Appleseed by Joshua Whitehead won, which means I have yet another item to add to my huge TBR. It’s also a wonderful sign that small presses are being recognized more and more as critical to our literary landscape, especially when they introduce readers to unique new voices such Marc Herman Lynch.